You are warmly invited to an artist talk and book launch with Mischa Kuball about his artwork the 'Solidarity Grid'.

Here is some information about the project, written by curator Blair French:
Mischa Kuball’s Solidarity Grid is a permanent public artwork that is also
a gift to the people of Otautahi Christchurch, New Zealand in the wake of
the destructive earthquakes of 2010 and 2011. This gift, a gesture of the
artist’s solidarity and labour, was formed not only of the artist’s idea, but
also of 21 functioning streetlamps, donated by 21 cities from around the
world.

The project evolved over three years – from 2013 to 2016 – thanks
to the work of SCAPE Public Art and Christchurch City Council. The gift of
each lamp stemmed from a range of civic, economic, cultural and personal
relationships, and involved complex processes of communication and
organisation – processes which built connections between the recovering
city and international communities. These relationships form a key element
in the project.

The lamps were installed on a pathway alongside Park Terrace which is both a boundary between the inner city and the major city parklands and gardens of Hagley Park, as well as a popular route for cyclists and walkers. All the lamps differ from one another in design, size and culturalhistorical background. Their new location extends their symbolic and social significance whilst maintaining their original function as sources of light. 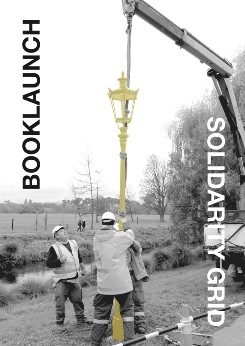 © Goethe-Institut Featuring extensive photographic documentation as well as contributions by the project curator, local art historians, curators, and visiting writers encountering the city in new way through the artwork, this book documents the Solidarity Grid project from its roots in a practical artistic response to an urban crisis, through its development and to its realisation as a monument, a place for reflection and a valuable contribution to the civic infrastructure.

Mischa Kuball, conceptual artist, has been working in the public and institutional sphere since 1977. He uses light as a medium to explore architectural spaces as well as social and political discourses and reflects on a whole variety of aspects from sociocultural structures to architectural interventions as well as emphasising or reinterpreting their monumental nature and context in architectural history.

Public and private space merge into an indistinguishable whole in politically motivated participation projects, providing a platform for communication between the audience, the artist, the work itself and public space. Since 2009, Mischa Kuball has developed a series of sitespecific installations entitled ’public preposition’ - a group of works, interventions, projects, and performances made over a period of several decades. What they have in common is that they appeal to a public sphere and implicitly question in what locations and under what circumstances what we mean by “public” is constituted and how it should be understood.

Since 2007 Mischa Kuball has been a professor for public art at the Academy of Media Arts, Cologne, and associate professor for media art at Hochschule für Gestaltung/ZKM, Karlsruhe. Since 2015 he has been a member of the North Rhine-Westphalian Academy of Sciences, Humanities and the Arts, Duesseldorf. In 2016 he was honoured with the German Light Award.