Exhibition Light from the Other Side: Shadowgraphs by Tim Otto Roth

Opening with artist Tim Otto Roth on Wednesday, November 9, 6:30 – 8 pm. The discussion will be moderated by Wendy A. Grossman, Curatorial Associate at the Phillips Collection.

Shadows underscore the beauty of nature and escape the captivity of their surfaces in the shadowgraphs created by German conceptual artist Tim Otto Roth. Usually referred to as photograms, these highly-differentiated shadow records on light-sensitive surfaces are created in a process similar to an X-ray. The images in this exhibition provide a glimpse into Tim Otto Roth’s fifteen years of research and development in this medium, a field also explored by the American visual artist Man Ray and currently by New York-based British artist Adam Fuss. 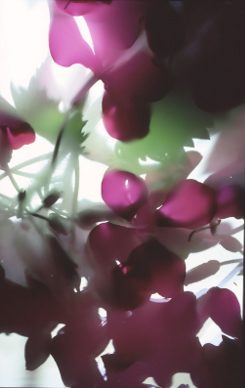 From the series flora domestica (c) Tim Otto Roth The plants and flowers whose shadows are captured on color slide film in the series flora domestica, making its US debut in this exhibition, appear to be backlit or illuminated from within, evoking the atmosphere of a window in a Gothic cathedral. The precise placement of a source of light in the darkroom creates a new way of seeing space and color, underscoring the secret beauty in the shadow world of flowers.

In sterea skia, Roth’s 3D shadowgraphs are partially computer simulated, partially generated by red and blue lighting on Polaroid film. With the use of stereo glasses, the spatial shadow figures leave the pictorial plane and step behind or in front of the surface. This captures a core theme of the concept artist’s work: the exploration of space in different ways, whether by translating objects into shadows, creating sound environments or capturing a fascination with the nocturnal firmament.

Tim Otto Roth (b. 1974, Oppenau/Black Forest) combines art and natural sciences in internationally-exhibited collaborations with leading research institutes and organizations such as the Hubble Space Telescope. In Nature (458, 836), renowned Oxford art history professor Martin Kemp summarizes his work as “a new art [...] encoding a new science.” Roth holds a degree in Theory of Visual Communication and a PhD in art and science history from the Academy of Media Arts in Cologne.

Wendy A. Grossman is a Curatorial Associate at the Phillips Collection and lecturer in art history at the Washington DC program of New York University and at the University of Maryland, College Park. After studying at the Freie Universität in Berlin and participating in taking down the Berlin Wall, she completed her PhD in art history at the University of Maryland, College Park. She is an art and photo historian with expertise in the history of photography, European and American Modernisms, the intersections between non-Western and Western art, Surrealism, and the artist Man Ray. She has authored numerous publications, including the 2009 award-winning exhibition catalogue Man Ray, African Art, and the Modernist Lens. Her most recent exhibition Man Ray Human Equations, which opened at the Phillips Collection and traveled to the Ny Carlsberg Glyptotek in Copenhagen, completed its tour in January at the Israel Museum, Jerusalem.