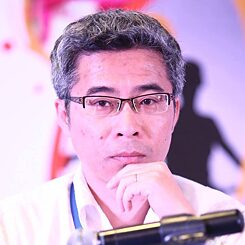 © Giang Dang Foreign journalists keep asking why Viet Nam has been doing so well to contain the Corona virus. (As I’m writing this, the country has less than 280 cases, eighty percent of them recovered, and no death). There are of course technical answers to that, but maybe it’s simply because Vietnamese have been always good at war? As soon as the virus “infiltrated” into the country, old propaganda posters are dusted up and recycled, new propaganda songs are commissioned. Each morning and afternoon, public loud-speakers on the street blasted government’s messages, asking the population to “continue living with the rifle on one shoulder and the plow on the other,” and this is in the time and age where many more work in electronic and textile factories and offices and shops than on the rice fields.

But it seems to work. Once again, like in the old days, people rally behind the Communist Party. While I’m happy that our fragile healthcare system has not been yet overwhelmed and the risks seem to be under control, the war-time rhetoric has made me uncomfortable. It stifles debates and critics. Last week, a Facebook user was fined the equivalent of an averaged monthly wage for mocking and criticizing the authorities’ social distancing policies, and nobody even paid attention. People, who normally would endlessly complain about the government, have suddenly started to appreciate an iron fist-style of governing. “The West is too free, now they pays the price,” they say while scrolling the news.

As the infection numbers have stagnated, national pride has surged, as if we are in an international competition, in which obviously many much richer countries have lost face. “Victorious Viet Nam!” “Superior Viet Nam!” people cry out as a Vietnam Airlines airplane touched down, bringing back home Vietnamese, who were fleeing Europe and the US, as the virus was raging there. Rather than “Stay home, save lives,” the slogan here is “Stay home, be a patriot.” 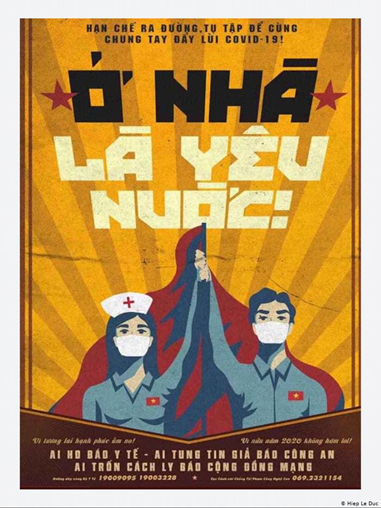 | This, again, is a problem for me. Quickly, people are labelled. A young woman lying about her traveling history to avoid being sent to the quarantine camp, is not just a reckless, irresponsible person, but a traitor, which is of course much worse. As such, she is subject of intense public shaming and online witch hunt, her private life dug up and laid bare on social media.

What would change in the post-corona virus world? In each great crisis, 9/11, the 2008 financial crisis, this one, people always say, “nothing will remain the same.” But I don’t think so. A month ago, the global systems were abruptly brought to a screeching halt. Now countries are looking for a way to slowly restart again. Sure, MNC will twist their supply chain to be less dependent on one location, Western nations will probably increase spending on public health care, tourism will be on half flame for a while, but I don’t see any systemic, structural reorientation. The markets just want to be back to where they were as quickly as possible. Globalization will go on. Environment will continue to suffer. The global South will be devastated, either by the consequences of the lockdown, or by the disease itself. But it’s also nothing new.

As for Viet Nam, the Party has scored lots of points and enjoyed a boast of legitimacy. After all of this, we’ll move even more towards a police state. A Vietnamese company just announced their new face recognition software which works even when people wear mask. The news is hailed by many as progress. Few weeks back, the police handed out financial fines to people who exchange Covid-19 related misinformation in a Messenger group. A Messenger group should be considered private communication, isn’t it? Again, nobody even noticed.

They say a crisis lays bare what’s already there. It’s certainly true with the Vietnamese nationalism. Blinded by their hatred against China, many Vietnamese celebrate Trump like a hero, because he called the Corona virus the Chinese virus. They love him even more when he threatened to cut funding for WHO, who they see as being in bed with the Chinese. In an absurd development, they turn to attack Bill Gates, translate and spread all the US right-wing conspiracies about him. The reason? In a video clip few years back about pandemics, Bill Gate used a Chinese map which has the nine-dashes line (on this kind of map, the nine dashes claims much of the South China Sea as China’s).

So the unity we currently see in the public here in Viet Nam, I’m afraid, stands on shaky legs. Recently, the New York Times reports about China: “As China tames the coronavirus epidemic now ravaging other countries, its success is giving rise to an increasingly strident blend of patriotism, nationalism and xenophobia, at a pitch many say has not been seen in decades.” It’s a bitter irony that as Vietnamese hate China, the two countries are so similar in so many ways.

Giang Dang is a Hanoi-based researcher, activist and book author. He runs a local NGO working in good governance and transparency. In pioneering initiative, over the last 10 years, his organization collects citizen’s experience across the country to measure the performance of local governments. As one of the leaders of Vietnamese civil society, he promotes democratic and humanistic values such as diversity, tolerance and empathy. He has published several non-fiction books which are widely influential in Vietnam.