Vietnamese Premiere of STREAKS (VỆT in Vietnamese). VỆT was premiered in the Master final project at Hamburg University of Music & Drama 2018.

For hundreds of years, Vietnamese culture has been strongly influenced by Confucianism. Accordingly, the life of a woman is governed by the rule of three subordinations: to her father at home, her husband after her marriage, to her son after the husband’s early death. As the idiom conveys: “Tại gia tòng phụ, xuất giá tòng phu, phu tử tòng tử”.

In the old days, women and their children did not live for themselves, and were not free to act on their own accord. They were strictly bound by conventions, obligations and responsibilities. Now, the impact of Confucianism on Vietnamese culture has been blurred to a certain degree, especially in the younger generations. However, there are still things that are ingrained in the mind of Vietnamese; but not erased by modern ways of thinking and feeling.

VỆT approaches the topic of the role and image of women in five compositions by Luong Hue Trinh. Each piece is based on a different approach. From precise and detailed standard notation to the flexibility of graphic scores as well as pieces between through-composed- and improvisation. Elements of traditional music are interpolated to blend with electronic sounds, combined with photographs, videos and texts to narrate these intricate relations filled with loneliness and torments.


The concert is dedicated to the musician SonX, who has a great influence on Luong Hue Trinh's musical path.

Photo: Luong Hue Trinh Luong Hue Trinh (* 1985, Hai Duong) is multimedia composer and electroacoustic music performer. She graduated with honors in Jazz Keyboard (BA) at the Vietnam National Academy of Music. Since 2010 she has worked in electroacoustic music, which has become her main musical focus today. From 2015-18, she was awarded a DAAD (German Academic Exchange Service) scholarship for the program “New Technique in Composition” and finished her Master in Multimedia Composition under the guidance of Georg Hajdu and Elmar Lampson at the Hochschule für Musik & Theater Hamburg, Germany.
Her Interviews and works have been broadcasted on Radio in Australia, Czech Republic, Germany, India, Norway, PRC, Scotland, Thailand, UK, USA. 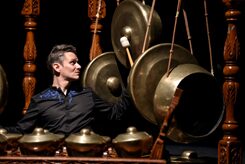 Currently, he is the percussionist with Inverspace (Switzerland) and Zero Crossing (Germany/Singapore). He has also played with Ensemble Modern (Frankfurt) and Zeitkratzer (Berlin). Percussionists Steven Schick and Johannes Fischer, Flutist Robert Aitken or Violoncellist Julian Steckel rank among his chamber music partners.

Max Riefer served as a lecturer of the Percussion Faculty at the Conservatory of Music Lugano (Conservatorio della Svizzera Italiana), Switzerland from 2010 to 2012, and gave masterclasses and lectures at the Birmingham Conservatoire (UK); Toho Gakuen School of Music; Tokyo Ongaku Daigaku (both Japan), Mannheim University of Music (Germany) and Mahidol College of Music (Thailand) among others.

After focusing mainly on instrumental-acoustical projects, Riefer has broaden his sphere with intercultural and interdisciplinary projects involving dance, acting, electro-acoustical music and video as well as composition.

Max Riefer had studied at the Freiburg Music University with Prof. Bernhard Wulff and Prof. Taijiro Miyazaki and at the Toho Orchestra Academy (Japan) with Prof. Yoshiyuki Tsukada and Prof. Kyoichi Sano. He is an endorser of Vibrawell Mallets and Pre du Rhin instruments.

© Dattie Do Dattie Do had been a vocal music student at Vietnam National Academy of Music, trained in Classical music for five years until he found his “true love” for Jazz in 2016.

He then made himself a definite decision to take the direction towards singing Jazz and started to sing professionally at the well-known Binh Minh Jazz club since early 2018. Dattie Do then appeared in some Jazz concerts, sharing the stages with prominent Jazz musicians such as legendary saxophonist Quyen Van Minh.

With his mellow voice and light way of delivery, Dattie Do chooses to incorporate in his repertoire the standard numbers spanning from the Swing era to later-developed styles such as Bebop and Cool jazz. In “VỆT” he experiments different ways of expression to discover other aspects in his voice. 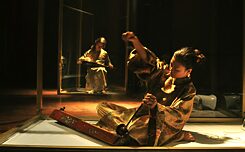 © Ngo Tra My Ngo Tra My is dan bau teacher in Vietnam National Academy of Music and she is one of the famous dan bau soloists in Viet Nam. She got the Certificate of merit of dan bau soloist in the National Traditional Professional Music Festival (1992), got Diploma of dan bau (1994), got Master of Music pedagogic (2007) at Viet Nam National Academy of Music. Her fields of activities are teaching, performing, researching traditional music and experimental music.

She was Vietnamese traditional instrument’s visiting lecture at Malmo Academy of Music-Lund University (from 2006 to 2008) and from 2006, she became the member of experimental music group The Six Tones and with this group had many performances as tour in Austria, Belgium, England, Poland, Scandinavia, and the U.S. Since 2008 she has been member of Thang Long traditional music band.

© Frank Sebastian Hansen Cedrik Fermont is a composer, electronic musician, mastering engineer, author, independent researcher, curator and radio host who operates in the field of noise, electronic and electroacoustic music since 1989, born in Zaire (DR Congo), he grew up in Belgium and currently lives in Berlin (Germany). He runs the platform and label Syrphe, a platform mostly dedicated to electronic, experimental and noise music from Asia and Africa. He is also a member of bands such as Axiome, Tasjiil Moujahed and many more.

Together with Dimitri della Faille, he co-wrote the book Not Your World Music: Noise in South East Asia, winner of the 2017 "Golden Nica" Prix Ars Electronica in the "Digital Musics & Sound Art" category.