When did it actually begin? 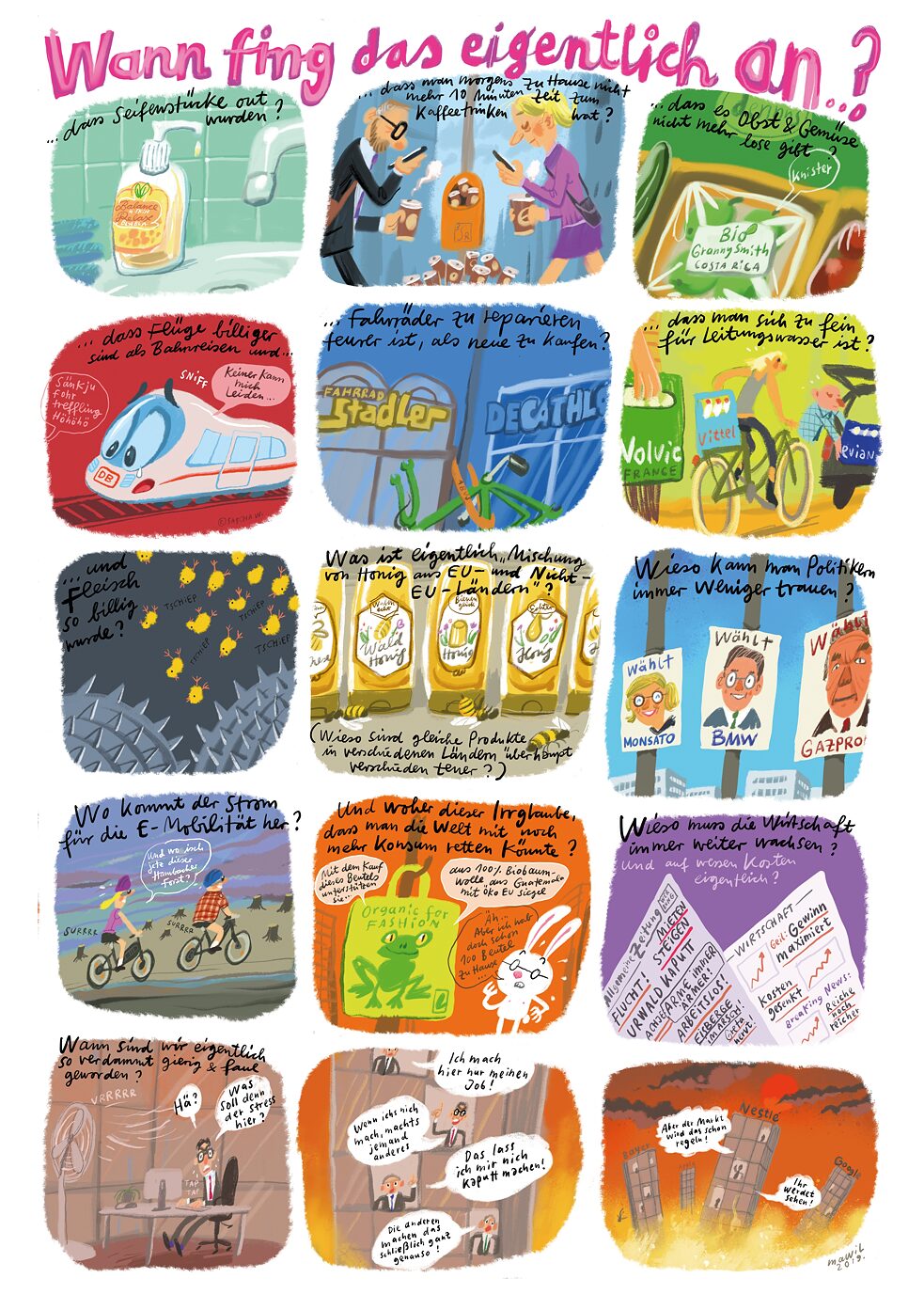 ... that we didn’t have 10 minutes for a coffee at home before going to work?

... and it cost more to repair a bike than to buy a new one?

... and that people got too fussy to drink tap water?

What on earth is a “mixture of honey from EU and non-EU countries”? (And how come the same goods cost more in some countries and less in others?)

Where does the power for e-mobility come from?
“Funny, they cut the trees down!”

And do we really believe that more consumption can make the world a better place?
“By buying this bag you are helping ...”
“Made from 100% organic cotton from Guatemala, with EU organic logo”
“Yes, but I’ve already got about 100 bags stacked up at home ...”

Why does the economy have to keep growing – and at whose expense?
“Daily News [Advertising]
Refugees flee! Higher rents!
Clear felling of virgin forest!
The poor get poorer!
Unemployed!
Icebergs doomed!
Greta still complaining!”
“Business section
Great news: profits up!
Costs down!
Breaking news: the rich get richer!”

When did we get to be so money-grubbing and so lazy?
“What’s this!?”
“I don’t need this stress!”

“I’m just doing my job here!”
“If I don’t do it, someone else will!”
“I can’t let all that effort go to waste!”
“Everyone else is working just like me!”

Mawil
Mawil was born in East Berlin in 1976. He studied at the Kunsthochschule Berlin-Weissensee. In 2003 he graduated with „Wir können ja Freunde bleiben“, the first in a series of more or less autobiographical books published by Berlin-based Reprodukt and translated into several other languages. In 2014 he won the Max&Moritz Prize for „Kinderland“ and in 2019 he was the first German to draw a Lucky Luke homage book. In 2021 he received the Wilhelm Busch Prize. Mawil still lives in Berlin. He draws for newspapers, travels the world for the Goethe-Institut, leads workshops, sometimes exhibits and is currently even working on a new book.
mawil.net