Bicultural Urbanite Brianna
The heart and soul of the city 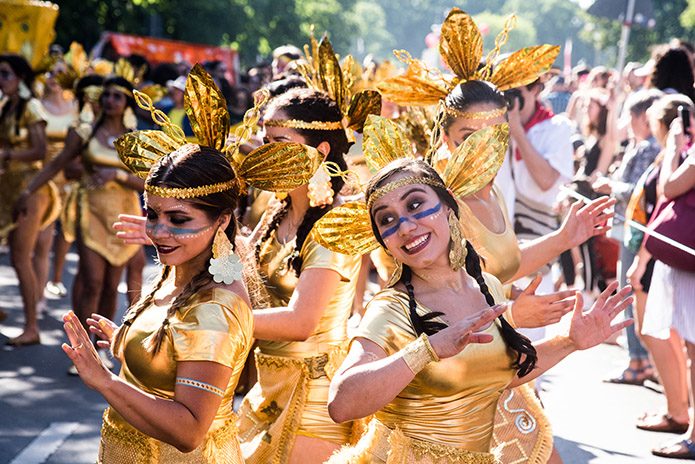 Razzle dazzle: Colombians at the carnival parade in 2018. | © Frank Loehmer

Every summer Berlin takes advantage of the ‘Pfingsten’ long weekend to throw a massive multicultural street party called ‘Karneval der Kulturen’. Over four days in June, Berliners of all stripes come together to eat, drink and parade around in colourful costumes ranging from the traditional to the truly bizarre. At a time when divisive and populist political parties continue to gain traction in Germany and beyond, I can’t think of a better way to show the naysayers that ‘multikulti’ is alive and well in Berlin.

Every fourth Berliner is a foreigner, according to Germany’s Federal Statistical Office. There are 193 nationalities living in the capital and at the top of the list are the Turks, followed by the Poles, the Italians, the Serbians and the Russians. Australians, too, have become part of the city’s multicultural fabric. Yet while the number of Australians has risen rapidly in recent years, we remain just a tiny fraction of the Zugezogene who call Berlin home. 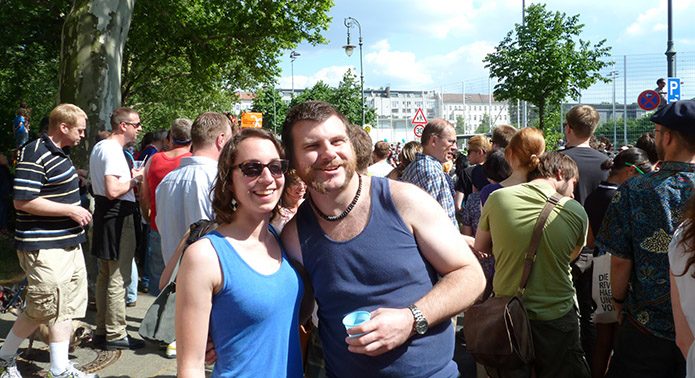 An Australian friend and I watching the parade. He inadvertently contributed to the festivities by wearing the Australian national dress. | © Brianna Summers
I first heard about Karneval der Kulturen when I was slaving away as an intern at a touristy bookshop on Unter den Linden in 2006 (think Generation Praktikum). My ageing boss had produced a promotional DVD “all about Berlin”, in which he sings the praises of the carnival: “in my opinion, it is even better than the Love Parade”. News of Karneval der Kulturen had not yet made it as far as Australia, but I’d certainly heard of the Love Parade. To my 22-year-old ears, an electronic dance music festival fuelled by Friede, Freude, Eierkuchen (peace, joy and pancakes) sounded like the more exciting proposition.

I never made it to the Love Parade, but in 2010 I attended my first carnival. My friends and I discovered that Wax Treatment was hosting a special open-air event as part of the festivities, so we decided to brave the crowds and head to Kreuzberg. The legendary Killasan sound system was set up out the back of our favourite club, Horst Krzbrg, for an afternoon of dub, (pre-Skrillex) dubstep and bass music. This towering wall of heavy duty speakers originally hails from Japan and is specially designed to vibrate the internal organs of anyone in its presence. Smoke billowed from a Jamaican barbecue as the hodgepodge crowd dipped and swayed to the music: the rastas and wiggas, locals and tourists, and curious onlookers wearing curious-looking costumes.

The heart and soul of Karneval der Kulturen is the “Global Village Kreuzberg” around Blücherplatz. This cluster of stages and information stands entertain and enlighten the masses with a mix of concerts, theatre and family-friendly activities. Food trucks serve up everything from naan wraps and pulled pork to Käsespätzle and Taiwanese hamburgers. The high point of the weekend is the Sunday parade, which last year consisted of 4,000 dancers, musicians, performers and activists, according to the carnival’s website. Throughout the parade Kreuzberg parents can be seen lugging around small step ladders, setting them up at strategic intervals so that their children can also get a piece of the action. 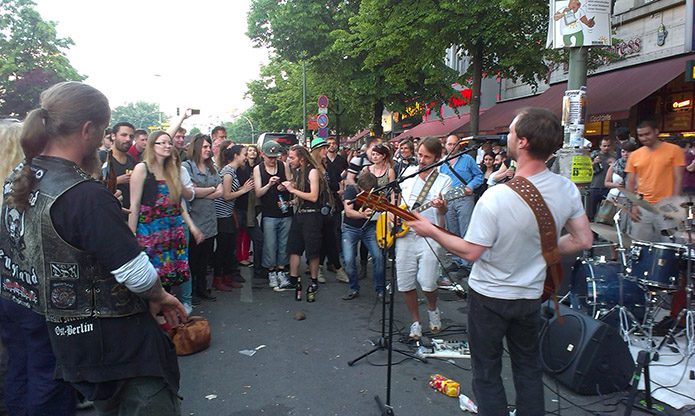 Local band rocking out on Mehringdamm in Kreuzberg. | © Brianna Summers
Karneval der Kulturen was launched in 1996 as a response to increasing racism and xenophobia in Berlin and it’s more than just a colourful celebration of different cultures. The organisers explicitly seek to promote inclusion and create a platform for groups to share their visions for the future.

Whether you want to dress up like a bird of paradise, perform a Dutch clog dance or simply chow down on a bucket of steamed dumplings, everyone at the carnival is free to express themselves and claim co-ownership of this amazing city.