About an hour outside Berlin lies a magical, swampy forest. The ancient growth is dissected by a series of picturesque streams and canals, making it irresistible to otters, dragonflies and tourists in fibreglass watercraft. Spreewald has long been on my travel wish list, so this summer my husband and I donned our functional clothing and embarked on a three-day Paddeltour through the UNESCO-protected region.

Spreewald is often overlooked by Berlin’s international visitors, despite being only a short regional train ride from Alexanderplatz. We started our trip in Lübbenau, where there are plenty of rental kayaks and canoes on offer. If you’d prefer not to break a sweat, you can even pay someone else to punt you along the waterways while you enjoy a champagne breakfast or a candlelit supper with riparian entertainment.

Our Kanadier, the SUV of canoes, had plenty of room for all our camping gear and snacks. After loading up and changing into our Dad sandals, we received a paper map and the advice “it’s basically impossible to get lost”. I couldn’t help thinking this was a bad omen. (Surely Sod’s Law would dictate that our flimsy little map would end up sodden?) 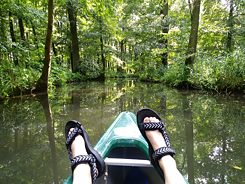 Escape from the City

I’ve heard Spreewald referred to as “the German Everglades”, although unlike the Everglades, there’s no need to keep a lookout for alligators. When we were there, even mosquitos were in short supply. The near-motionless water mirrors the surrounding plant life, while a gentle breeze carries the sounds of chirruping frogs and the whirring wings of luminous dragonflies. Civilisation occasionally disrupts the serenity with its droning tractor engines and squealing children in kayaks, but for the most part, our Spreewald soundtrack was simply the slurp and splash of paddles dipping in and out of the water.

Our campsite was marked by an outsized pickle giving us two very enthusiastic thumbs up. Spreewald is renowned for its pickles: the region is packed with gherkin farms and the resulting produce accounts for half the pickles consumed in Germany. Locals are understandably proud and pickle tourism probably generates a large slice of their income. Spreewald boasts a pickle museum, a pickle-themed bike trail, numerous pickle markets and spin-off products including pickle-flavoured liqueur, BBQ sauces and even beer.

As a snack, pickles are often accompanied by wholemeal bread smeared with pork fat. To me, this is “bread and dripping”: a last-resort meal I’ve read about in wartime history books. In modern day Germany, Schmalzbrot 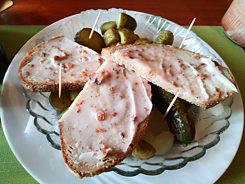 Pickle tasting plate with Schmalzbrot (bread and lard) | © Brianna Summers is still going strong. Friends of mine told me that bread and dripping even used to be a common snack at house parties when they were growing up. So while I was chowing down on Cheezels in 1990s Melbourne, German teenagers were apparently smearing lard on untoasted bread.

Given all the pickle hype and the forest’s UNESCO status, we were never going to have Spreewald entirely to ourselves. We encountered plenty of other paddlers as we navigated our way through the canals and the traffic increased whenever we neared villages or beer gardens. The tourist crush peaked on Sunday afternoon in the quaint village of Lehde. Hundreds of gaily coloured paddles twirled through the air as the smaller vessels jostled with larger boats steered by mouthy men with gondola-style poles. A couple slurping cans of rum and coke laughed, argued and sulked as they sloppily steered their boat into other boats, walls and bushes. Pensioners sat like visiting dignitaries at the cafes above, calmly observing the chaos as if it were some bizarre foreign ritual.

We were glad to leave Lehde. Yet we were sad to depart Spreewald after three days of spectacular scenery and endless beer, sausages and pickles. No matter what floats your boat, I reckon this swampy oasis is an ideal antidote to big city life.