Rachel O’Reilly’s documentary film Infractions is the culmination of years of research, artwork and interviews addressing unconventional gas and its relationship to contemporary art and culture in Australia. A recent preview screening in Berlin, courtesy of the commissioning institution KW Berlin, featured a Q&A with both the director and a star of the doco.

Infractions kicks in with a bumpy car ride from Ntaria in Australia’s Northern Territory. O’Reilly is being driven north-east by Que Kenny, following a well-used road through the area’s conventional gas fields, which have fed domestic supply in the area for decades already.

The film itself travels a winding path – from speculative exploration sites to export points – along the scars that conventional mines and climate change have left in northern Australia. These routes also cross songlines, significant trails of meaning within Australian Indigenous culture. For the Indigenous people featured throughout the film, many of them artists themselves, there’s evident pain in moving through this already stressed spiritual, communal and natural landscape.

As they drive along the endless, straight dirt roads and dry riverbeds, Kenny describes the paltry sums – between $10 and $100 per family each year – that trickle into her community from existing mine royalty deals. In Australia’s north, a sense of neglect by governments and mining companies fuels widespread anger against fracking, forming new and unprecedented coalitions among Indigenous communities, green groups and non-Indigenous farmers.

Fracking refers to a method of extracting gas from the earth through a high-pressure mix of water, sand and chemicals. This mix is pushed down the holes drilled for the mines, obliterating the shale rock to release the oil and gas. Fracking, invented in the USA, has been banned in several places, including in Victoria in Australia and recently in the UK.

The film shows how younger Indigenous people are holding onto precarious traditional knowledge | © Rachel O'Reilly "Infractions" 2019 This controversial process produces toxic wastewater, which Infractions captures in drone footage hovering above shimmering aquamarine ponds in western Queensland. To see these lateral images connecting is striking. The silky water contrasts against the arid red of desert landscapes in an uncannily beautiful way, until their utility is revealed.

Kenny grew up in Ntaria and travelled to Berlin for a Q&A session after the screening. She discussed with the audience her interest in establishing contact with possible members of her family in Germany. Ntaria is also known as Hermannsburg, a legacy of German Lutherans from the Hermannsburg Mission who arrived in Australia in the 19th Century to preach Christianity among the Indigenous community.

Ntaria is a small town of 625 people – but is perhaps best known as the hometown of Albert Namatjira, an Indigenous painter of Central Australian landscapes rendered in a European style. One of Namatjira’s best-known paintings depicts Mt Hermannsburg, a place we see in flames in Infractions. In the scene, Kenny captures on her phone an unexpected gas flare rising one night from the top of the range, a result of up-scaled extraction. Speaking in Berlin, O’Reilly called the film “upside-down art history” – not so much displacing Namatjira, but relating his already renowned story to the consumption of country in Ntaria’s past and present.

The fracking projects at the centre of the film also establish points of ongoing contact between Australia and Germany. Australia is now the world’s largest fossil gas exporter, having overtaken Qatar, and will probably send some of that to Germany – the number one user of gas in the EU – as the country seeks to overcome its longstanding reliance on Russian gas.

Supported and launched through the Production Series from Berlin’s KW Institute for Contemporary Art, Infractions’ public programs establish further links between Germany, where O’Reilly now lives, and Australia, where she continues to engage with the arts and academy, cultural workers and activists. Indeed, the gas project has a personal impetus for O’Reilly who grew up in Gladstone, Queensland, where three liquefied natural gas plants were approved for the industry’s first onshore expansions in the last decade. 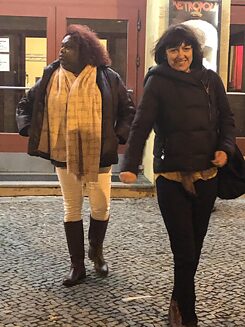 One of the most compelling moments in Infractions is when O’Reilly arrives in Gladstone and shows three Gooreng Gooreng elders footage of another man, Jack Green, describing the struggles in his community with mining companies. The Gooreng Gooreng women shake their heads in disbelief as Green describes the tactics of people he calls “white ants” that infiltrate and eat away at the sovereignty of Indigenous communities, by withholding information and offering short-term gifts.

Australia’s coastal cities are again coming under water restrictions. So it’s shocking to learn that fracking uses such an incredible amount of water. The UN suggests one frack on a gas well uses between 11 and 34 million litres, although it could be much higher (up to 60 million litres) in these regional Australian areas.
On top of this, the wastewater that flows back out of the fracked earth – returning to the surface – is notoriously difficult to treat for the chemicals, radionuclides and heavy metals that are dredged from the shale. Many approved and proposed fracking sites in remote areas threaten the potable water supply of entire regions, such as Alice Springs, and cover over vast underground water flows.

The film shows how a younger generation of Indigenous people is tracking down and holding onto precarious sovereign knowledge, linking with the international climate and anti-fracking movement and using slogans that echo global protests over fossil fuels.

O’Reilly’s film is not the only documentary to be made about the struggles against fracking in Australia – she recommended the SEED group’s film on the topic. But, it’s an important document in our current climate emergency – both for Germans who may unwittingly benefit from the gas extracted from the fracked earth, and for Australians who may not yet realise the scale of the plans to mine their country.

"Infractions" will screen in Berlin again in December and will be shown in Australia in 2020.

Ben Gook is an Australian researcher and writer based in Berlin. Publications include "Divided Subjects, Invisible Borders: Re-unified Germany after 1989" (Rowman & Littlefield International, 2015) and various essays on Australian and German cultural politics.