The coronavirus pandemic has prompted a rethink about how we should live, work and travel. Berlin is making the best of a bad situation by expediting further improvements to its bike infrastructure — much to the delight of the city’s growing number of cyclists.

The last bike I owned in Melbourne had Spokey Dokes. It wasn’t until I moved to Berlin that I began to view bicycles as a legitimate mode of transportation. Being broke at the time meant I was lured back onto the saddle for financial reasons, yet I quickly discovered the joys of cycling around a city with plenty of bike paths and hardly any hills. The German capital, as it turns out, was built on a swamp.

Berlin’s cycling infrastructure received a massive injection of funds in 2018 as a result of the Mobilitätsgesetz, a mobility law designed to make the city more sustainable. (Remember climate change?) That year the city spent €13.4 million upgrading existing infrastructure and adding new bike lanes. Warschauer Straße, a major road linking Friedrichshain and Kreuzberg, was fully resurfaced and luxuriously wide bike lanes were added—a cyclist’s dream. Several back streets that cyclists were already using to avoid busy thoroughfares were specifically labelled as Fahrradstraßen (bicycle streets). While these streets also permit residential traffic, bikes have precedence and cyclists are allowed to ride side by side.


Despite all these improvements, many dicey roads and intersections remain. Kottbusser Damm, a busy shopping street in Kreuzberg, is notoriously dangerous. This temptingly direct north-south route attracts cyclists despite being characterised by double-parked vans unloading goods, erratic hoons in muscle cars—and no bike lane. Perhaps unsurprisingly, this is also where I was doored by a taxi in 2013. My body took flight and sailed over the handlebars like a sack of meat, landing first on the gravelly road and subsequently on an ambulance stretcher. 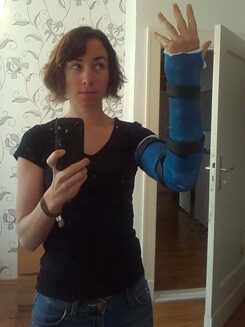 My robot arm: A bone in my elbow fractured when I was doored on Kottbusser Damm in Kreuzberg | © Brianna Summers

Luckily, the accident rate on this hazardous high street is also set to take a dive, thanks to the “pop-up bike lanes” that were added to Kottbusser Damm in April this year. These and other new lanes appeared seemingly overnight at numerous locations around the city and are designed to facilitate social distancing among cyclists during the pandemic. The lanes also deter cyclists from switching to the footpath to avoid dangerous roads and thereby making footpaths more crowded for pedestrians.

I first noticed these pop-up lanes en route to my friend’s place in Prenzlauer Berg. Heading up the hill from Frankfurter Tor, I steeled myself for the cracked and narrow bike path along Petersburger Straße. This skinny strip of lumpy pavement is flanked by roaring traffic on the left and cars reversing blindly from angle parking on the right. There is no room to overtake, so it’s common to get stuck behind slow pokes or witness cyclists performing risky manoeuvres to get ahead. As I approached Petersburger Straße from the Bersarinplatz roundabout, I was surprised to find myself funnelled onto the road by temporary yellow markings. The new lanes are extra-wide, clearly marked and protected by construction bollards with yellow reflectors. Bliss.


By the end of April, 10 kilometres of these new bike lanes were already up and running. How did the city manage to pull it off so quickly? (After all, Berlin is not exactly renowned for its technological prowess or well-oiled bureaucracy.) Regine Günther, Berlin’s Senator for the Environment, Transport and Climate Protection, told Der Spiegel that the groundwork had already been laid and it was simply a case of bringing forward the existing plans. Her department has spent the last three years preparing the legal framework, hiring new administrative staff and restructuring the relationship between the city-wide administrative bodies and the local councils. Günther is adamant about the need to rethink the way we use space in cities; she believes it’s time to shift the focus away from the needs of cars. 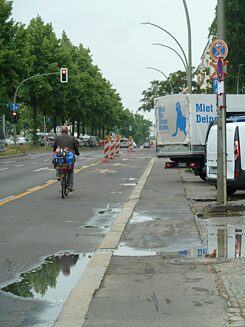 It’s not yet clear whether the lanes are here to stay. Günther says the temporary solutions will be made permanent, but in late March the local council in Charlottenburg-Wilmersdorf said that the lanes are initially only intended for the duration of the pandemic and that turning a provisional solution into permanent infrastructure would require a new hearing process.

I’m optimistic that the lanes won’t be rolled back, only to be reinstated at a later date. Germans may love doing things by the book, but I reckon there’s sufficient political will to skip a few pages and make these changes stick.