The STUDIO BERLIN exhibition at Berghain. Fittingly, the couple sitting out the front were swigging from a cheap bottle of Rotkäppchen sparkling wine. | © Brianna Summers

Berlin’s nightlife and arts scene have taken a battering this year. Clubs remain closed and all major art events have been scrapped or postponed. In response to the ongoing crisis, the city’s most famous nightclub has joined forces with the Boros Foundation to create a new and unusual stage for local artists.

The larger-than-life Berghain nightclub closed its doors on 11 March 2020 as the pandemic swept through Berlin. Other clubs soon followed suit with disastrous repercussions for their staff, promotors and DJs. The city’s artists were also severely impacted by the lockdown. Planned exhibitions and major art fairs were cancelled and commercial galleries closed for a month, reopening in late April with strict hygiene and social distancing rules.

After lying dormant for six months, Berghain has begun welcoming a different kind of public. The disused power station turned clubbing behemoth has now transformed itself into a gallery with the help of the Boros Foundation, a non-profit organisation that promotes contemporary art. Established by art collectors Karen and Christian Boros, the foundation is renowned for showcasing items from the couple’s vast private collection in a WWII bunker in Berlin-Mitte. Consequently, they know a thing or two about hosting exhibitions in unusual locations. 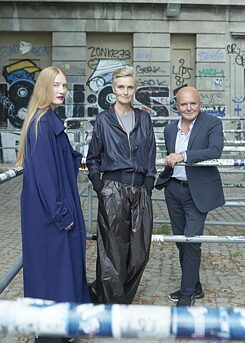 The Berghain/Boros collaboration is called STUDIO BERLIN. It’s an eclectic mix of photography, sculpture, painting, video, sound, performance and installations produced by 117 contemporary Berlin-based artists. After the launch on 9 September, I was lucky enough to nab a ticket before all the guided tours for September and October sold out. When my appointed 90-minute time slot rolled around I sauntered up to the concrete monolith, safe in the knowledge that I would not be arbitrarily denied entry by Berghain’s notorious bouncers. While there were no pat downs or bag searches, I still had to present my phone so that security staff could place stickers over the front and back camera lenses (this is standard procedure in many Berlin clubs).


Our guide kicked things off with a disclaimer: “Normally, I’m behind the bar serving drinks. I don’t have any formal art history training.” He adjusted his surgical mask, tightened his grip on a wad of well-worn A4 notes and led us through a heavy metal door into the dark, cavernous guts of the club. Heading up to the main dancefloor I sensed a tingle of adrenaline as I recalled the excitement of climbing those stairs in my late 20s—an act that marked the beginning of what would inevitably be a very long and sweaty night.

Above us, a massive buoy suspended on wires bobbed in the air, mimicking the movements of an actual buoy, covered in sensors, floating somewhere in the Atlantic Ocean. The hands of a large clock spun backwards and I wondered whether this was part of the exhibition or a rather apt permanent fixture. A video depicting the monotony of life during the pandemic was projected onto the wall above the bar; it was the work of Sven Marquardt, Berghain’s (in)famous tattooed bouncer.

Middle-aged art lovers casually wandered past the club’s dark rooms and other nooks designed for sexual encounters. A pungent aroma of urine and sweat easily infiltrated my mask as we entered the toilet block to admire a self-playing piano. A device like a printhead slid back and forth along a gantry, pinging individual keys to emit hauntingly resonant tones. Our guide threw us one or two nuggets of information about the work and gave us a few seconds to admire its brilliance before scooting off to the next objet d’art. 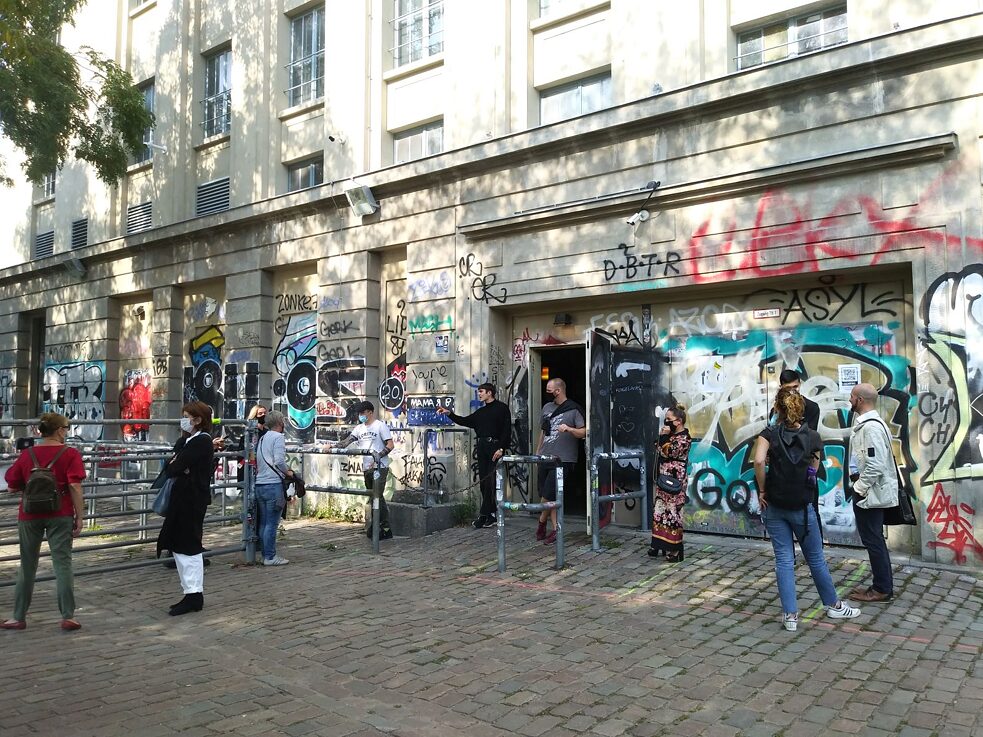 
In Panorama Bar, unfamiliar natural light cast its cruel eye on the flea-bitten black leather seating. An outsized pink flower drooped over the dancefloor and a woman made of handbags clambered over the bar. The smoking area was scattered with human teeth—hefty replicas made from salt. The seven-kilo chompers were certainly striking, but what was the artist trying to say? The exhibition is deliberately unlabelled, so we were reliant on the barman’s fairly limited explanations.

Just when I thought I’d seen it all, we stepped through the wardrobe and into Narnia. Inside the colossal former boiler house, inverted concrete pyramids hung from the roof and an ornate fountain filled with flammable liquid burned in slow motion on a massive screen. Overlapping audio installations generated a blurry soundtrack for a 3D-printed classical sculpture, a cluster of faceless cloaked figures and other curiosities.

Being back at Berghain was thrilling. The exhibition was visually impressive, yet I felt that much of the conceptual art fell flat due to the lack of explanations. The barman gave it a red hot go, but his lack of specialist knowledge combined with the ambient noise and muffling effect of his mask meant that I only caught snippets of information. Those snippets also had to be quickly digested, as rolling bookings meant the clock was always ticking.

Even though I will never know what motivated someone to create a jungle out of household cleaning products or imprint clay bricks using actual human organs, I left feeling optimistic about the ability of the arts scene to adapt to a constantly mutating virus.