Bicultural Urbanite Brianna
We apologise for the delay

After 14 long years, the Berlin-Brandenburg Airport is finally open. Endless technical debacles, six postponed launch dates and a budget blow-out of around four billion euros turned the infrastructure project into a running joke. So what went wrong? And what does the future hold for Tegel, Berlin’s now defunct international airport?

Back in 2006 a youthful-looking Mayor Wowereit happily shovelled dirt at a ground-breaking ceremony in Schönefeld. The photo op marked the start of construction on the Berlin-Brandenburg Airport (BER), an infrastructure project designed to strengthen the German capital’s reputation as a world-class, international hub. Politicians and company representatives smiled for the cameras as they flung dirt through the air, blissfully ignorant of the major delays and budget blow-outs that lay ahead.

BER was designed to encompass and drastically expand the existing Schönefeld Airport, thereby paving the way for the closure of Tegel, the city’s small and outdated international airport. The new airport was originally due to open in October 2011, but it quickly became clear that the deadline would not be met. Issues arose almost immediately, including the bankruptcy of a planning company involved in the project. Although the building was physically standing by 2011, assessors discovered problems with the fire protection system and numerous other defects, so the airport’s doors remained closed. The estimated costs jumped from two billion to more than four billion euros and the opening was pushed back to October 2013. 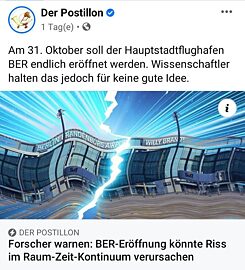 
At around that time some jokester created a fictitious event on social media called “BER Airport Opening Party 1 April 2025”, which I joined alongside around 100,000 others. The stuff-ups and delays were starkly at odds with Germany’s practical and punctual stereotype and the airport project became a running joke, a topic ripe for memes. One popular meme tapped into the ‘Chuck Norris Facts’ trope, which plays on the American actor’s tough guy image by suggesting he can achieve superhuman feats: “Chuck Norris becomes site manager of the Berlin Airport. The opening is tomorrow morning at 7:30 AM.”

Without Chuck on hand to help, the 2013 deadline came and went. Then in 2015 construction had to be halted after it was discovered that parts of the ventilation system were too heavy and might come crashing down on passengers. Not exactly a great Unique Selling Point. At the start of 2017, uncontrollable automatic doors and defective sprinkler systems caused the opening to be pushed back to 2018. The comedy of errors continued in late 2017 when external reviewers revealed major issues with the airport’s fire safety measures and emergency alarm systems. A new (very generous) date was set: October 2020. 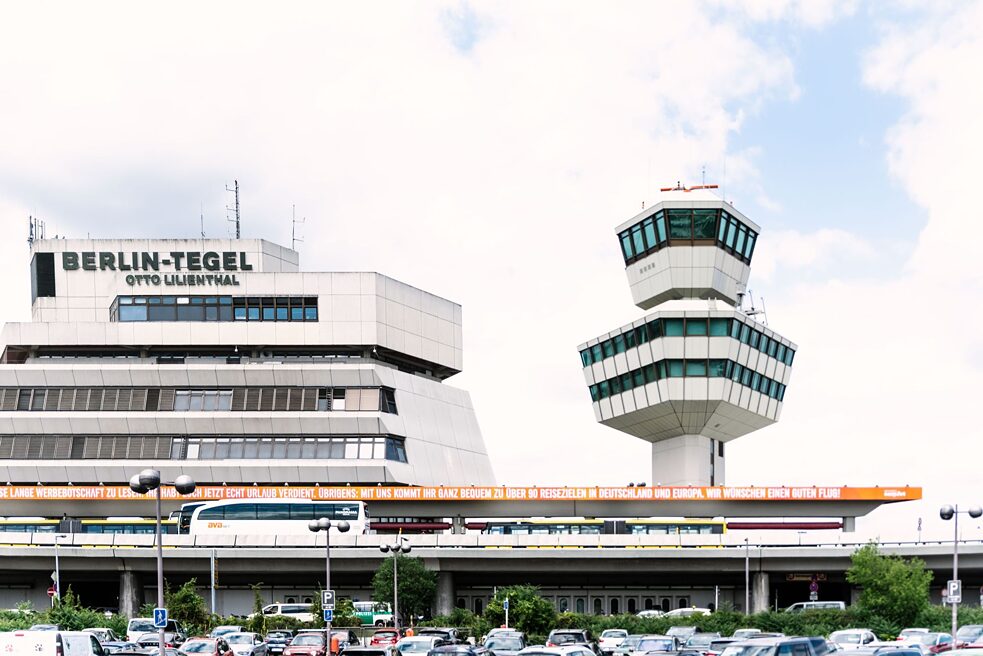 The Tegel Airport building was completed in 1974 | © Ekaterina Zershchikova/BER Some 14 years after the ground-breaking ceremony, it’s hard to believe that BER is actually operational. I’ve been living in Berlin for just over 14 years, so the bungled construction has been a constant fixture of my time in Germany. The long-awaited launch was, understandably, an understated affair. At a perfunctory press conference, this is how the Federal Transport Minister Andreas Scheuer began his speech: “This launch event…normally we would have called it a festive gathering. We know the reasons why that is now not the case. It’s not a day for rejoicing. It’s a work day.” On social media, the fictitious launch party event was peppered with comments sarcastically praising the six billion euro price tag and congratulating the airport company for finishing the project a full five years earlier than the phoney launch date.


While the construction drama played out in Schönefeld, in the city’s north Tegel Airport teetered endlessly on the verge of closing. Now, after a pretty good innings, it has finally retired. The first runways were built at Tegel in 1948 during the Soviet Union’s blockade of West Berlin and were used by Allied planes as part of the Berlin Airlift. Tegel’s iconic hexagonal airport building opened in 1974, which explains its rather Star Wars design. Awarded a heritage listing in 2019, this funky aesthetic will be preserved for future generations to enjoy, regardless of what ends up happening to the site. 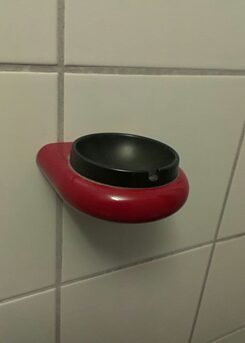 1970s convenience: An ash tray inside a toilet cubicle at Tegel Airport | © Brianna Summers Tegel was my gateway to Melbourne. The outdated fittings were crappy or charming, depending on your taste, and each gate had its own miniature security screening checkpoint. Red plastic ash trays inside each toilet cubicle harked back to an era when smokers could keep puffing away while on the loo. A kiosk inside a converted Sbahn carriage served Berliner Currywurst to hungry passengers before they took an actual Sbahn into town. In the lead up to the closure, the airport’s visitor terrace was apparently booked out for months and fans have been snapping up TXL merchandise, perhaps hopeful that “I ❤ TXL” snow domes and tote bags will one day become collectors’ items.

With the coronavirus pandemic still surging across Europe, October 2020 was not the best time to open a new airport. According to Tagesschau, air traffic in Germany is only around a quarter of what it was a year ago. BER is starting on the back foot, faced with a lack of travellers and burdened with massive debt—it’s clear that the airport will require subsidies for years to come. The forecast is sunnier over in Tegel, where there are plans to turn the airport building and grounds into a new city district filled with educational institutions, businesses and new housing for 10,000 people.