Sketch of the new “Citizens in Motion” monument | © Milla & Partner

Berlin’s long-awaited monument to the Peaceful Revolution of 1989 is finally being built. The large interactive sculpture will sit alongside the recently resurrected Berlin Palace on Museum Island, making it the latest addition to a site famous for its struggles over German political memory.

Berlin’s Museum Island will soon be serving up another slice of history. A large bowl-shaped monument is currently being built on this iconic riparian site in honour of those who took part in the Peaceful Revolution that toppled the East German regime in 1989/90. The “Citizens in Motion” monument will not only commemorate those who raised their voices in support of democratic rights and freedoms, but also remind Germans to hold tight to what they have gained.

After more than a decade of debate about how best to commemorate Reunification, a competition was held to find a suitable design. The winners were Stuttgart designer Johannes Milla and Berlin choreographer Sasha Waltz, who had envisioned an enormous shallow bowl that several hundred people could walk on. When enough people gather on one side of the bowl, the entire structure will slowly tip in that direction, like a giant see-saw. This gradual shift symbolises the power of a majority to instigate movement and change. While the memorial’s official title is “Citizens in Motion” (Bürger in Bewegung in German), I wonder if locals will soon give it an Australian-style moniker, like the “Big Bowl” or the “Big See-Saw”. 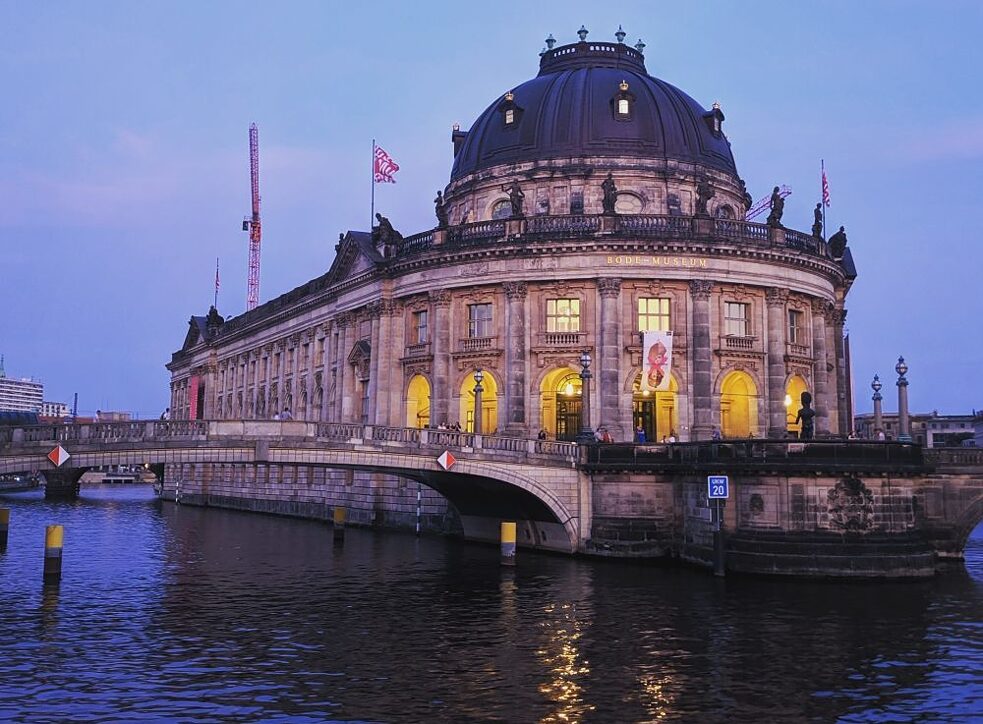 Museum Island is one of the most visited sites in Germany's capital | Credit: Alana Harris / Unsplash

A site steeped in history


The monument’s island location is already weighed down with layers of history and political symbolism. The site is associated with the March Revolution of 1848, the formation of the German Empire in 1871, the proclamation of the Weimar Republic in 1918 and it was home to East Germany’s parliament building in the 1970s and 80s. Last but not least, the German Unification Treaty was signed in the nearby Crown Prince’s Palace in 1990. Never a dull moment, it would seem.

The most recent architectural upheavals on the island involved a tug of war between Germany’s Prussian and socialist histories. In 1950 the war-ravaged Berlin Palace, a symbol of Prussian militarism, was demolished by the German Democratic Republic (GDR). After four months and 19 tons of dynamite, the palace was gone. There wasn’t enough political will to save it, plus the restoration would have cost 32 million GDR marks and the socialist government had other priorities. The windswept expanse where the palace once stood was renamed Marx-Engels-Platz, thereby further underscoring who was now in charge and where the country’s future lay. The empty space was used as a parade ground until the Palace of the Republic was completed in 1976. This boxy “house of the people” with its bronze-tinted, mirrored windows served as the East German parliament building and also contained restaurants, art galleries, a theatre and a bowling alley. 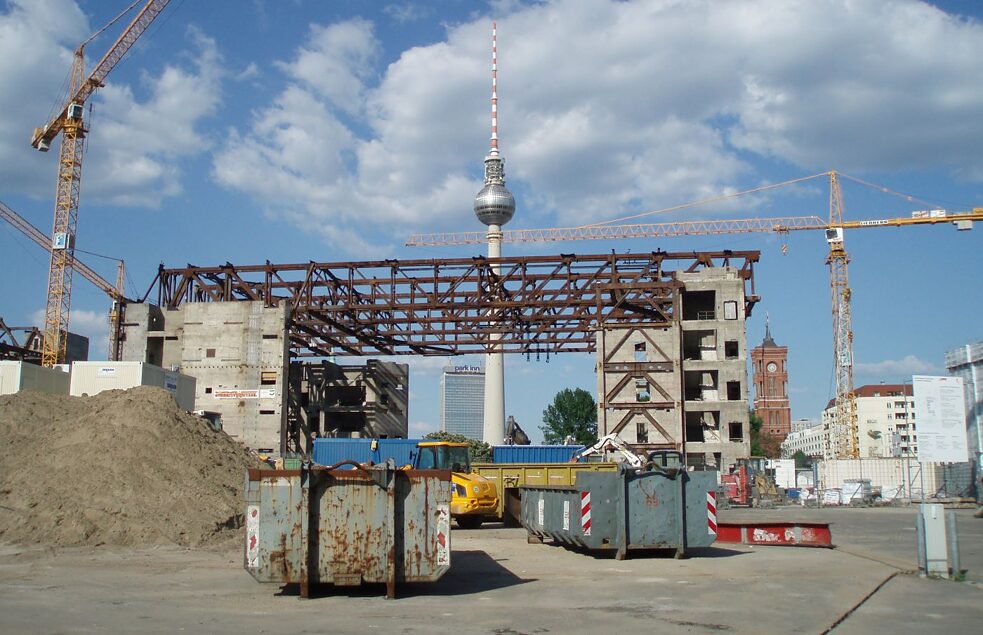 voted off the island

Yet this palace lasted nowhere near as long as its predecessor. After Reunification, Germans busily discussed whether to save the building or demolish it, thereby erasing what some deemed to be a politically unsavoury memory. At the same time, a debate kicked off about the possibility of rebuilding the Berlin Palace. Regardless of which history would ultimately be commemorated at the site, there was some serious biohazard work to be done first as the building contained over 5,000 tons of asbestos.

In 2003, the federal parliament finally voted to get rid of what remained of the socialist skeleton. I find it a shame that the Palace of the Republic was not retained in some form. For better or worse, the GDR is a major part of German history and one that deserves to be remembered. The demolition of the Plattenbau monster took two years to complete, as lingering asbestos and nearby buildings meant that dynamite was a no-go. 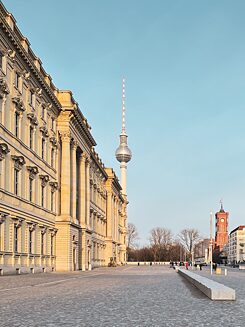 The southern façade of the Berlin Palace replica | Credit: Paul Hermann / Unsplash The next victory in the island’s political memory struggles was chalked up in 2007 when the federal parliament signed off on the construction of a simulation of the Berlin Palace. This post-modernist’s dream is known as the Humboldt Forum: Three sides of the structure recreate the Baroque majesty of the Prussian original, while the fourth side is a grey concrete slab that belies its modern interior. Inside, you won’t find the usual trappings of royalty—the Humboldt Forum is a modern museum that houses Berlin’s collections of ethnological artefacts and Asian art.

This Prussian pastiche brings us back to the “Big Bowl”. The newest layer of the Museum Island cake is currently being baked onto the western terrace of the Humboldt Forum, where it will perch atop a massive plinth that had previously showcased a statue of Kaiser Wilhelm (until the East Germans gave it the boot). From up there, tourists will soon be able to watch the setting sun while slowing tipping back and forth in line with the will of the masses.

“Citizens in Motion” is scheduled to open in early 2022.