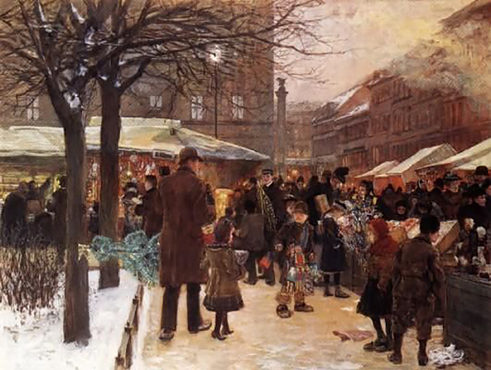 In Australia, December marks the beginning of the ‘silly season’: a busy time of Christmas shopping, boozy socialising, TV re-runs and frivolous news stories. But while Aussies are slopping on sunscreen, Germans are slipping into thermal underwear and lighting Advent candles as they countdown to Christmas. Here in Germany, the festive season’s gastronomic delights and magical markets offset the downsides of a dark and freezing European winter.

Last year I spent Christmas with my family in Australia. Blistering 40-degree heat kept us cooped up inside, lounging in an air-conditioned bubble. Torn wrapping paper was thrown in all directions and we gorged on an array of salads, cold cuts and beer. There’s a lot to be said for wearing shorts on Christmas Day as you watch a miniature plastic fir tree slowly melt in the sun, but I have to admit – I missed the quaint charm and traditions of Weihnachten in Berlin.

The German festive season is cosy and contemplative, traditional and tacky, beautiful and bizarre. Families crunch along icy streets scattered with gravel, juggling shopping bags and eating steaming crepes filled with Nutella. Actual fir trees are dragged into offices and homes, leaving trails of needles in their wake. People gather together to set fire to rum-drenched lumps of sugar, which slowly drip into big pots of mulled wine waiting below. Dried fruits and peeled almonds bob on the surface of the resulting Feuerzangenbowle, which is best enjoyed with hearty fair such as roast goose, potato dumplings and red cabbage. 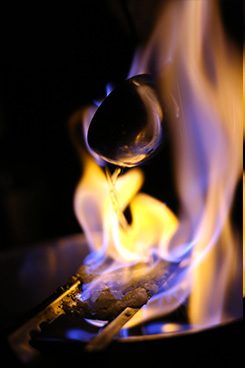 Feuerzangenbowle: mulled wine with rum and sugar. | Wikipedia Commons / Tobias Klenze / CC-BY-SA 4.0
By the time Christmas Eve rolls around, Santa Claus has already been and gone. He does the early shift in Germany, filling kids’ shoes with chocolates and lollies on 6 December. Instead, children eagerly await the arrival of the Christkind (Christ Child), who delivers gifts on the evening of 24 December. The thought of baby Jesus delivering game consoles, bath bombs and onesies seems odd at best (and blasphemous at worst), however the Christkind usually takes the form of a small blond girl with angel’s wings. Yet on the weirdness scale, all of this pales in comparison to what goes on in Catalonia, where a special Christmas log is ‘fed’ and kept warm so that it will defecate presents on Christmas Day.

In the market for a good time

The traditional festivities I missed most while celebrating Chrimbo back in Melbourne were the Christmas markets. There is something genuinely satisfying about braving the cold to meet friends among the fairy lights, warming your hands on a mug of Glühwein (mulled wine) and perusing a selection of handcrafted knickknacks. Admittedly, not all markets are quaint and magical – the Wintertraum am Alexa is a glitzy fun fair where teenagers ride the Mad Mouse in sub-zero temperatures. 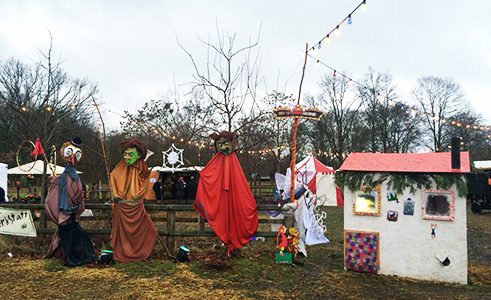 Fairytale characters at Schloss Britz's medieval Christmas market. | © Brianna Summers My favourite is probably the medieval Christmas market at Schloss Britz, a former manor house and estate established in the 18th century. Advertised as a “historical fairytale Christmas market with Nordic flair”, this annual gathering of festive punters, local businesses and cosplay enthusiasts is not to be missed. The magic of Santa’s Workshop meets the ye olde kitsch of Kryal Castle. It’s a match made in heaven, perfectly complemented by the classics of German outdoor entertaining: meat, alcohol and Schlager music.

Lurid dreamcatchers sway in the breeze, illuminated by the twinkling lights of an enormous Christmas tree. Bearded men wearing jerkins, cloaks and Nikes chat to damsels in flowing gowns and puffa jackets. Sellers tout medieval paraphernalia, while a central stage showcases the local talent. There are jesters and jugglers, choirs and cover bands, as well as a theatre group performing fairytale classics like The Devil and the Stolen Pancake.

May your Christmas dreams come true

Wonderfully daggy and down-to-earth, Schloss Britz is truly a (mystical) gem among Christmas markets. Children can play aboard a replica Viking ship, ride ponies around a muddy field, or hold on tight to the muscle-powered historical merry-go-round. And while your kids are making hand-dipped candles or practicing their crossbow skills, you can slip away to buy a Bratwurst and another mug of piping hot mead.

And of course, no visit to Neukölln’s most enchanting Christmas market would be complete without making a wish at the wooden water wheel. As in times gone by, this historic water mill slowly rotates above a trough of water on a mobile platform. Electrical cables snake their way from beneath the platform to a nearby power generator that shudders and churns. A handful of copper coins dance below the cascading water, inviting passers-by to make a wish. Go on, toss in a coin and may all your Christmas dreams come true!