The crew at Passenger Coffee in Berlin | © Meike Kenn Fotografie

Coffee shop owner and Australian expat Garth Gregory has been keeping Berliners caffeinated since 2004. His old school approach favours blends and darker roasts, while his Passenger coffee shops focus on bringing people together rather than dissecting nuanced flavours. I had a chat to him about starting a business in Germany, gentrification and the perils of third wave specialty coffee.

Garth first came to Germany as a 15-year-old exchange student. During that trip he attended the Love Parade in Berlin, began learning German and discovered that the local coffee culture wasn’t worth writing home about. Those early experiences sowed the seeds for what would become a successful entrepreneurial expat life. After studying design in New Zealand and Bremen, Garth hung around in Auckland’s coffee shops, plotting his escape from the antipodes and fantasising about starting a business in Germany.

In 2003 Garth and his mate Callum took the plunge. They flew to Berlin, bought an old coffee machine and started selling Australian-style coffee at music festivals. Their business plan? “We knew that [German] coffee was bad, we knew that we knew how to make coffee, cause we’d only ever worked in coffee shops,” Garth recalls. “We spent a lot of time trying to find machines, trying to find someone who could roast us a half decent bean. They were pretty wild years, as anyone young coming to Berlin will know. We spent a lot of time drinking and doing things other than whatever you’re supposed to be doing.”

BACK IN MY DAY

Even in 2003, the word on the street was that Berlin had already peaked. Despite the naysayers, Garth embraced the city’s rough and ready vibe, renting a 30 square metre coal oven-heated flat in Friedrichshain with some friends. “Instead of there being a whole lot of hipsters and intellectuals here, there were lots of lefties and punks and the ex-squatting community,” he says. Alongside the festival circuit, Garth and Callum also sold coffee at the Boxhagenerplatz fresh food market. “Back then it was a square piece of dirt covered with punks and drunk people and their dogs, lots of dogs, shitloads of dogs. I heard that the reason there were so many dogs is because if you were unemployed and you had a dog, you got extra money to feed the dog. So there were so many dogs. And dog shit. Everywhere.”

While setting up their mobile coffee company they wrote a proper business plan, invested in a van and a coffee machine, and headed to the Bezirksamt to get everything rubber stamped. After considering his paperwork, the clerk looked up thoughtfully and asked whether they had considered not selling coffee. Maybe they would like to sell ice cream, flowers or fish instead? Apparently the law only permitted mobile vendors to sell ice cream, flowers and fish. Coffee just wasn’t on the list. The expats were unprepared for this spectacular display of German dedication to regulatory compliance (and love of rational problem solving). “Luckily we figured out that you can sell coffee on privately rented spaces, so at street festivals or markets. But she didn’t say that. She was just like ‘why don’t you change your plans?’” 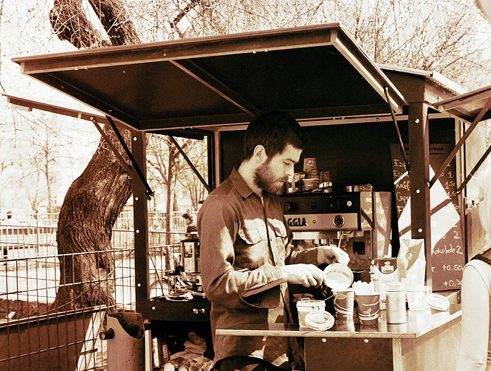 IN IT FOR THE LONG HAUL

In 2010 shit started to get real. Callum had returned home and, as always, Garth was on the lookout for a new project. He teamed up with his German friend Jan and together they opened the Passenger Espresso coffee shop in Kreuzberg’s Oppelner Strasse. “I promised my business partner, I said ‘look, I’m here for the next ten years, I’m going to do this with you’, so I suppose I do call Berlin home now,” he says. True to his word, Garth is still here, although in winter he is often overcome by an intense desire to escape. I’m sure many Australian expats can relate to his description of the monotony and madness of Berlin’s winter: “You get to January and you start losing it. Then you get into February and you’re like, ‘oh my god, is this going to end?’ Then in March and you’re like ‘I gotta do something’. Even in April you’re like ‘Christ, is summer ever going to come’?”

As someone who has borne witness to the spectacle of Berlin’s ongoing gentrification, how does Garth view his constantly changing city? “For me, the most negative thing I’ve noticed is the loss of tenants’ rights or tenant security,” he says. “Almost every building has been renovated in the last few years and broken up into individual apartments and sold off privately, which basically drove rent through the roof.” Garth also seems mildly astonished that people in Berlin actually appear to have jobs these days: “I’ve run coffee shops here for seven years and I’ve noticed that people are actually working now. They get up in the morning, even like at seven o’clock, and leave their house, purchase a cup of coffee and go to work! Which is a development, I mean, when I got here, there was no-one on the street before ten o’clock. No-one was working. You couldn’t find a job. So gentrification also has a whole thriving aspect to it. People can make money doing what they want to do.”

Garth and Jan’s business is thriving, too. In 2015 the Passenger Espresso team launched Passenger Coffee, a cafe/roastery in Treptow that supplies small businesses in the hospitality industry with coffee beans and professional advice. Unlike the many third wave specialty coffee shops and roasteries that have saturated the Berlin market in recent years, Passenger blends its beans (shock!) and roasts them a little darker (horror!). Garth is slightly bitter about the fuss surrounding lightly roasted specialty coffees, as this artisanal approach to caffeine tends to focus on where and how the beans are grown, the roast profiles, innovative brewing methods and so on. For him, coffee shops are first and foremost a place for social interaction. “We’re interested in spaces where people come and talk…and not to talk about coffee, but to talk about something else. I grew up in New Zealand sitting around coffee shops and I think it’s a really healthy sign of a society when there are thriving coffee shops,” he says. 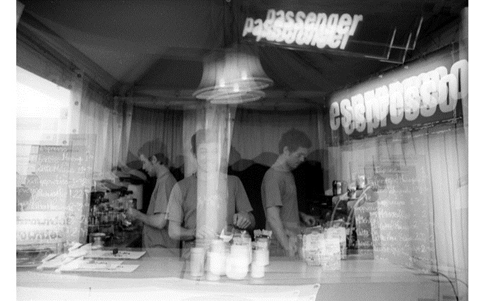 Preparing caffeine for the masses at a music festival. | © Martin Schwemin But is coffee wankery really such a sin? According to Garth, the correct preparation of specialty coffees is a fine art that places huge demands on the barista. He explains that “[in the hospitality industry] you can’t really afford to pay the kind of employees who have the knowledge and skills to prepare the coffee properly, so that you can taste the apricot that’s growing in the field next to beans, you know? Cause that’s what you want to do with this kind of coffee. You want to taste that apricot. If you mess it up, you’re not going to taste apricot, you’re just going to have a mouthful of sour shit.”

In the future, Garth would like to grow his own apricots. When I enquired about his upcoming projects, he indicated that a treechange is in order. Lookout, Brandenburg, there might be a Passenger coffee shop travelling your way soon.