My own initial encounters with alcohol took place when I was a teenage exchange student in the Ruhr Valley. My exchange partner and I were both 16 – the legal drinking age in Germany – so on the weekend we would meet up with her friends at the local pub, sit around chatting and drink a beer or two. It all felt very civilised and grown up. By contrast, my teen drinking experiences in Melbourne inevitably took place in parks or at friends’ houses without parental supervision and people would drink whatever they could get their hands on. Usually this meant slabs of tinnies or cheap goon. One friend of mine favoured vodka. Not because she liked the taste, but because it was “cheap and effective”. While another had a collection of road signs in her bedroom, stolen while roaming the streets after various park piss-ups. Alcohol was forbidden and exciting and the aim of the game was quantity, not quality.

Australians are drinking more responsibly than they were ten years ago, according to DrinkWise. Yet some Australians still take a ‘go hard or go home’ approach to drinking and alcohol-related violence continues to cause headaches for law enforcers and policymakers. The Australian Institute of Criminology reported in 2017 that “there is a well-established drinking culture in Australia of ‘drinking to get drunk’.” Have we inherited a dysfunctional relationship with alcohol from the mother country? Is it a hangover from the ‘six o’clock swill’ caused by 1960s liquor licensing regulations? Or maybe it’s because we invented the wine cask? Sure, Germany also has drunken yobbos and problems with alcoholism, but on a night out in Berlin you’re less likely to encounter unprovoked aggression or see someone vomiting into a municipal rubbish bin. 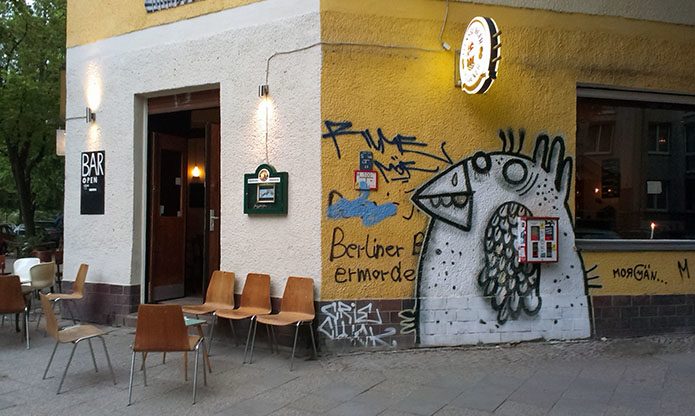 One of the many bars in Kreuzberg. | © Brianna Summers Germany has a long and proud brewing tradition and beer is not heavily taxed, so it costs about the same as water. Alcohol is everywhere in Berlin, yet excessive drinking with the aim of getting completely legless seems to manifest mainly in tourist hot spots (or behind closed doors?). Perhaps the ubiquity and affordability of alcohol provides less incentive to stockpile and binge? Beer, wine and spirits are available from every späti (late-night corner store) and ID checks are few and far between. There’s even a decent selection of wine in shops like Rossmann, the German equivalent of Priceline. Day and night, people can be seen walking the streets with half-litre bottles of beer swinging from their hands.

Opting out of the drinking game can raise eyebrows in both countries. Not drinking socially in Australia may prompt questions or invite a bit of ‘good-natured’ ribbing. Your non-alcoholic options are often limited to Coke, Sprite, Fanta & Co, while in Germany, there’s a wider range of acceptable alternatives for people who choose to drink less or no alcohol. Berliners are crazy for Club Mate, a lemonade infused with mate tea extract, and there’s also a whole raft of organic soft drinks with more natural flavours. The Radler (beer mixed with lemonade) is another handy option for designated drivers – and unlike the English word ‘shandy’, Radler (which means cyclist) isn’t spiked with negative connotations.

A big night out on the turps in Melbourne is likely to involve being ‘carded’ by bouncers and buying rounds of drinks, a common tradition that encourages everyone to be involved in the communal inebriation. German drinking conventions vary from region to region, but anstoßen, or clinking glasses before you start drinking, is a universally practiced custom. As with any cultural tradition, there are various ways of doing it wrong. The drinkers’ arms must not cross over (if there are many people involved) and it’s imperative to have eye contact when the glasses meet. I have experienced Germans actually withdrawing their beer from my incoming beverage if I’m not looking directly at them. Often this gesture is performed in an exaggerated, theatrical way with arched eyebrows and wide, bug-like eyes. As the two glasses meet, you can choose from a variety of well wishes, such as Prost and Zum Wohl, as well as the diminutive Stößchen and Prösterchen that are often used tongue-in-cheek. They’re the equivalent of saying something like ‘clinky winky’ or ‘cheersy weersy’. I’ve even heard the English word ‘cheerio!’ used erroneously in this context, which sounds like a pre-emptive farewell before the well-wisher drinks themselves under the table. 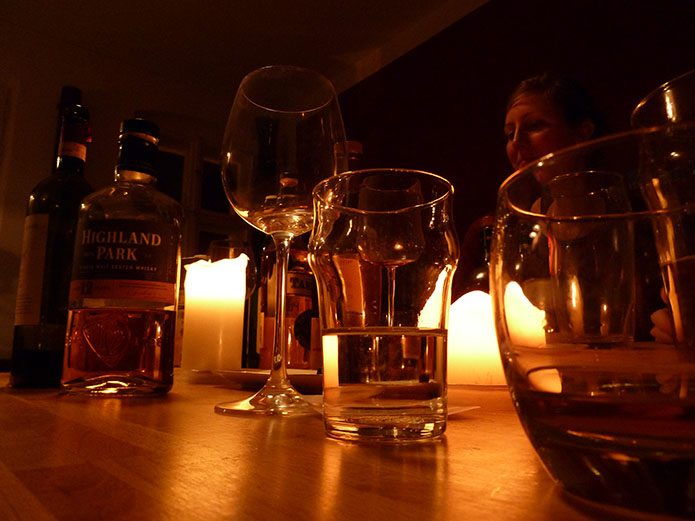 A boozy dinner party. | © Brianna Summers While Germany and Australia share a heavy drinking culture, their love of booze is expressed in different ways (and with different consequences). Living in Australia, you could be forgiven for thinking that there was some kind of intrinsic link between alcohol and violence. Yet based on my own experiences and observations in Berlin and Melbourne, I doubt this is the case. As Berlin-based journalist Tim Gregg wrote in the Sydney Morning Herald, “Australia doesn’t have a problem with alcohol. Australia has a problem with violence”. Despite its own complicated relationship with the bottle, Germany shows us that a high rate of alcohol consumption does not automatically translate to a high rate of alcohol-related violence. Now that’s worth drinking to.