With international travel shut down in response to the COVID-19 pandemic, touring around Germany is off the cards for the time being. But if you’d like to do the next best thing and pretend, these ten films and TV shows will show you the country from your couch.

Cinema’s ability to transport viewers to another place should never be underestimated — in normal times, and especially when a global pandemic has changed the world as we know it. Whether watched in a darkened theatre filled with fellow movie buffs, or viewed at home from the comfort of your own couch, a film can bring faraway places into your orbit. A television show can too, and on a regular and prolonged basis.

With international travel ceasing due to COVID-19, seeing the world via a screen is the only option there is at present. Thankfully, German-produced and German-language cinema each provide an ample array of material. Spanning streaming and DVD options — and both films and TV programs — here are ten worth watching.


Thanks to Head-On, Soul Kitchen, In the Fade and The Golden Glove, Fatih Akin has brought his hometown of Hamburg to the screen multiple times, in different ways, and while casting it in various lights. But in Goodbye Berlin — known to German cinemagoers as Tschick — he leaves his trusty usual setting behind for a youthful road trip through regional Germany. Here, a pair of teenager outsiders (Tristan Göbel and Anand Batbileg, pictured above) steal a car and hit the road outside the German capital. The likeable coming-of-age story takes a recognisable narrative path; however it also offers a nice tour through plenty of vivid scenery. Goodbye Berlin is available via SBS On Demand, Google Play and YouTube.


Focusing on a hip-hop producer in Frankfurt am Main, Skylines hones in on Jinn (Edin Hasanovic). When he’s signed to a record label Skyline Records, he discovers the seedier side of the business — including its links to organised crime. There’s no shortage of plot in this Netflix-produced German series, with plenty of ebbs, flows, twists and turns jam-packed into its six episodes. And while it only lasted one season, with the streaming platform cancelling the show just a couple of months after its late 2019 release, Skylines makes hefty use of its Frankfurt (and occasionally Berlin) setting. Skylines is available via Netflix. 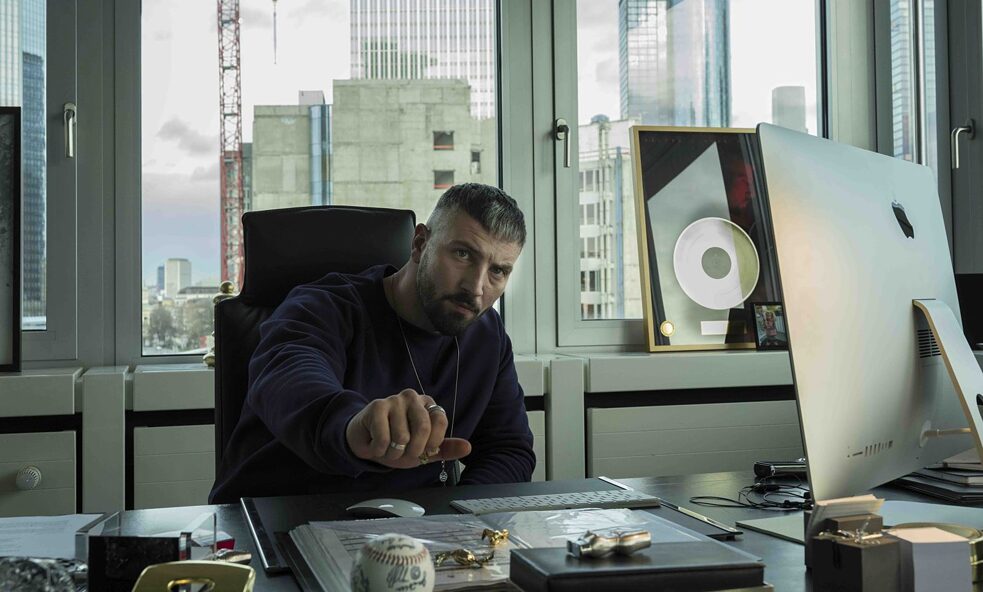 
While Netflix’s twisty, time travel-filled sci-fi series Dark boasts no shortage of highlights, its mood and look — and the locations that contribute heavily to both — rank among its best traits. There’s no such place as Winden in reality, with the small town a figment of series creators Baran bo Odarn and Jantje Friese’s imaginations; however a patch of forest an hour outside of Berlin does a spectacular job at helping convince viewers otherwise. The bulk of the show is shot in the German capital, but you’d never guess it. Also, any trip to the country’s scenic woodlands is worth taking. Dark is available via Netflix.


Food is the main focus in Mostly Martha, as one would expect in a romantic comedy about a workaholic chef. Also attracting plenty of attention in Sandra Nettelbeck’s film: the ups and downs of Martha Klein’s (Martina Gedeck) life, especially after tragedy completely changes her status quo. But the city of Hamburg still gets a fair look-in, as the city where Martha lives and dedicates her time to cooking up a storm at a gourmet restaurant. Sometimes, the best ways to explore a place via film is by watching someone just go about their day, which Nettelbeck realises. Mostly Martha is available via SBS On Demand, Kanopy, Google Play and YouTube.


Given that this film's German title is Gladbeck, there are no prizes for guessing one of the locations this German mini-series visits, with this industrial North Rhine-Westphalia town thrust firmly into the spotlight. Its other title, 54 Hours, stems from the amount of time that armed bank robbers-turned-kidnappers Hans-Jürgen Rösner (Sascha Alexander Gersak) and Dieter Degowski (Alexander Scheer) were on the run — with their hostages  — as they attempted to flee through Germany. Jumping across the state, the series chronicles the tense real-life events from 1988, including the German media’s live pursuit of the culprits. 54 Hours is available via SBS On Demand.

KINGS OF THE ROAD


The third part in Wim Wenders’ mid-‘70s Road Movie trilogy — following Alice in the Cities and The Wrong Move — Kings of the Road spends its time with two strangers as they journey together along the eastern side of the inner German border. It’s a film about men (Rüdiger Vogler and Hanns Zischler) grappling with life; however it’s also a feature where taking in the landscape they pass through proves just as important as peering at the characters themselves. Indeed, before Wenders roamed through Berlin to such striking effect with Wings of Desire, he roved his lens over West Germany's border area in much the same fashion. Kings of the Road is available via Kanopy.


Rainer Werner Fassbinder’s hometown of Munich features heavily across his filmography. That includes in Ali: Fear Eats the Soul, which sets its dramas a few months after the attack at the 1972 Munich Summer Olympics. One of the prolific and iconic writer/director’s best works, the film continues his dissection and exploration of post-World War II Germany, this time by following the romance between an elderly woman (Brigitte Mira) and a Moroccan migrant (El Hedi ben Salem). It’s also an example of Fassbinder’s renowned speed and efficiency, with the movie shot in less than two weeks. Ali: Fear Eats the Soul is available via DVD.


Tom Tykwer’s breakout film literally pounds Berlin’s busy pavements, all as its titular red-haired heroine (Franke Potente) sprints around the city to help save her desperate and distraught boyfriend Manni (Moritz Bleibtreu) — by finding 100,000 marks in 20 minutes. Relaying three possible outcomes and pondering fate versus free will in the process, the energetic Run Lola Run is filled with tension and thrills from the outset. It’s also a Berlin sightseer’s delight, exploring the German capital — a place that’s no stranger to screens — at street level beyond the usual tourist destinations. Run Lola Run is available on DVD. 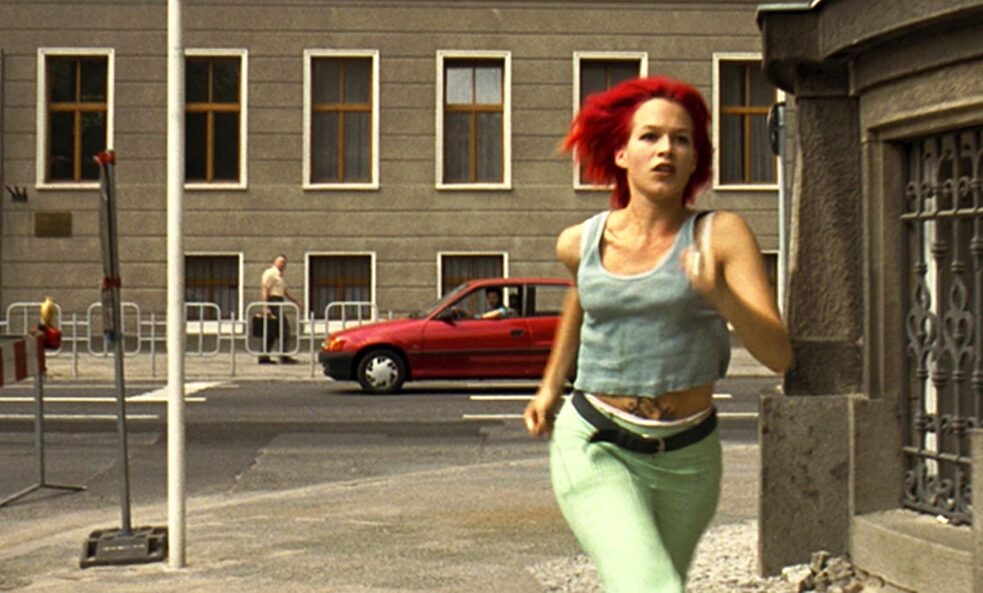 
In The White Ribbon German-born Austrian filmmaker Michael Haneke ventures to Germany’s north to serve up a dark exploration of moral corruption and its insidious impact in the lead up to World War I. His on-screen setting, the Protestant village of Eichwald, is fictitious; however Christian Berger’s Oscar-nominated cinematography soaks in the film’s real-life locations with an exacting eye. As splashed across the screen in crisp black-and-white, the Palme d’Or-winning movie makes the most of places such as Leipzig, Lübeck, Michaelisbruch, Netzow and Dassow. The White Ribbon is available via Kanopy, Google Play and YouTube.


For her second film, Australia director Cate Shortland went to Germany, adapting The Dark Room by British novelist Rachel Seiffert. Set as World War II comes to an end, Lore chronicles the experiences of its teenage titular character (Saskia Rosendahl)  — the daughter of a Nazi officer, sister to four siblings, and the person charged with guiding the family from their Black Forest cabin to her grandmother’s house in Hamburg. As it tracks their trek, as well as their chance meeting with a concentration camp survivor (Kai Malina), the masterful and moving drama also surveys the southern German countryside. Lore is available via Kanopy, Google Play and YouTube.