Nina Hoss is reliably exceptional in this purposefully challenging sophomore feature from filmmaker Katrin Gebbe, which first premiered at the 2019 Venice Film Festival, and now makes its Australian debut at the Brisbane International Film Festival.

The idea that parenting isn’t easy is no stranger to cinema screens, whether fuelling the overt terrors of The Omen, the comedy of Parenthood or Problem Child, or the empathetic drama of 2019 German feature System Crasher. Combine the latter with another film on the topic, Australian horror hit The Babadook, and Pelican Blood just might be the end result. Katrin Gebbe’s sophomore feature after 2013’s Nothing Bad Can Happen is never as schematic or as straightforward as that combination might sound, however. Indeed, it eschews easy categorisation and easy answers at every turn, and easy portrayals as well. Naturally, it helps that the feature stars Nina Hoss, a master of complex performances — but Gebbe has matched her lead actress to her material in an astute fashion.

Hoss plays horse trainer Wiebke, who runs a North German farm used by the police force to prepare its equestrian squad. With the team of officers, she helps the galloping creatures get accustomed to the type of noise, movement and distractions they might encounter at riots and demonstrations — and, as her tenderness with and commitment to a horse by the name of Top Gun shows, she doesn’t believe in giving up on any animal. Single, albeit attracting the attentions of squad member Benedikt (Muruthan Muslu), she’s also a mother to adopted nine-year-old Nikolina (Adelia-Constance Giovanni Ocleppo). Wiebke is happy, as is her daughter, but they’re also eager to expand their family by welcoming five-year-old Raya (Katerina Lipovska), another orphan from Bulgaria.

Alas, where Nikolina is dutiful, kind, loving, studious and visibly comfortable in her surroundings — and, from her strong bond with Wiebke, it appears that has been the case since her arrival — Raya proves the opposite. At first, Wiebke chalks up the younger girl’s outbursts to the struggle to adjust to the move and to her new circumstances, but she soon devolves from smashing plates and being generally petulant to a near-permanent unsettling state, including screaming non-stop because she can’t get her own way and instilling fear in her preschool playmates. As Gebbe’s script has already made plain via its protagonist’s treatment of the animals in her care, Wiebke is unwilling to even stomach the possibility that her home mightn’t be the place for Raya. With the child already hailing from a troubled background, Wiebke is haunted by the belief that relinquishing her role as her mother would only result in further trauma. 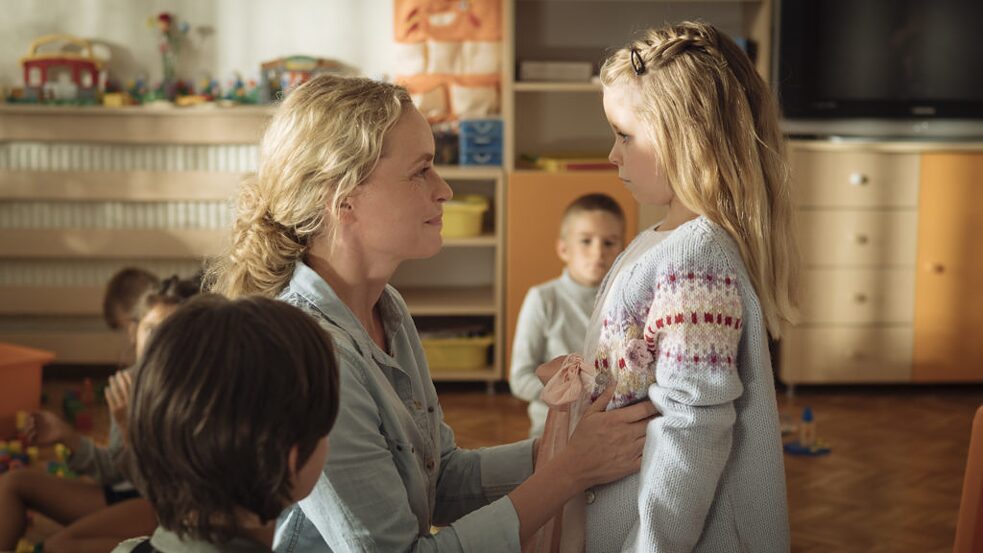 
Casting Hoss rarely proves anything less than a masterstroke, as the filmography of Christian Petzold demonstrates. Earlier this year, Stephanie Chuat and Veronique Reymond’s My Little Sister also benefited from enlisting the actress in one of its main roles, and the weepy cancer drama won’t be the last film to reap the rewards of that choice. Pelican Blood actually pre-dates My Little Sister, premiering at last year’s Venice Film Festival, but Gebbe joins a growing list of directors who’ve bettered their features through Hoss’ presence. Of particular importance here is Hoss’ longstanding, reliable and exceptional ability to ensure that, no matter who she’s playing or what scenario she’s facing, there’s never anything simplistic about her characters. A stressed-out mother grappling with a difficult new child might seem instantly familiar thanks to much of cinema history, and yet Wiebke feels anything but in Hoss’ hands.

That texture is evident just by peering at the graceful Hoss, which Gebbe and her cinematographer Moritz Schultheiß (another Nothing Bad Can Happen alum) do often. No one can fault either the writer/director or the director of photography for constantly wanting to direct the lens Hoss’ cowboy hat-wearing way — she’s an arresting presence — but each glimpse helps build a portrait of a woman determined to soldier on even in the toughest and most testing of instances. In a film that doubles as a character study, such shots lay a pivotal baseline, allowing audiences to notice as the toll of raising Raya leaves an imprint on Wiebke. Hoss provides a quiet, internalised performance, with Gebbe’s script tasking her with saying more with her demeanour than with her words, and these moments couldn’t be more important.


Pelican Blood wants its audience to understand Wiebke, and her subtle complications, to see where her response to her difficult situation stems from. Unsurprisingly so; it’s quite the reaction. Without spoiling details any further than mentioning The Babadook does, the film doesn’t just chart the dramas caused by Raya’s behaviour, but veers into superstitious and supernatural territory. As a result, its central figure makes a variety of choices about how to handle her new daughter that, if they weren’t grounded in such a strong portrayal, might seem outlandish. They continually speak to Pelican Blood’s steadfast refusal to serve up easy answers, because motherhood rarely tracks the intended course, and they’re purposefully thorny. In other words, it’s a perfect role for Hoss.

Amidst the patient and warm-hued sights of life on the horse farm, the obvious but never too heavy-handed symbolism of Top Gun and his fellow steeds, and the tentative romance between Wiebke and Benedikt, Pelican Blood uses something else to illustrate its embrace of complexity: the young Lipovska. There’s a volatility to her performance that keeps the entire film on edge, as Wiebke clearly is. And yet, Raya’s actions are so unnervingly erratic that it’s impossible to continually predict how she’ll lash out — or, very occasionally, not — even after she’s diagnosed by a child psychologist as sociopathically lacking emotions and empathy.

In fact, the overall feature shares as much in common with Lipovska’s portrayal as with Hoss’, including in a finale that threatens to stretch a little too far. Caring in life is an act of commitment, and never a clear-cut one. Continuing to be compassionate when warnings are literally being yelled at you, and fires deliberately lit, could never be breezy either. And so, in exploring this fact in a multitude of ways, Pelican Blood chooses a challenge again and again.