Directed by German photographer-turned-filmmaker Jim Rakete, and screening in Australia via the environmentally focused Transitions Film Festival, this impassioned documentary follows young activists from around the world as they attempt to combat climate change.

Some climate change documentaries feature Al Gore talking through the most important PowerPoint presentation you’re ever likely to see. Others take Leonardo DiCaprio to different parts of the planet to witness global warming’s impact, or watch Australian actor Damon Gameau as he steps through the currently available technologies that could help stop the earth’s current environmental trajectory. Beyond the likes of An Inconvenient Truth, Beyond the Flood and 2040, however, a growing number of films are finding their content in everyday faces. German documentary NOW is one such effort, tackling its crucial topic through the young activists who have turned it into their crusade. That may seem like a specific niche, but this category of films is certain to keep expanding, as it should.

In the past five months alone, both the Greta Thunberg-focused I Am Greta and Wild Things, which charts Australian eco-activism across the course of a year, have reached cinemas Down Under. Everyone with an interest in the future of the planet — so, that’d be everyone — should hope this subgenre of documentaries continues to grow. Films about environmental activism bring the fight to save the earth down to street level. They may make impassioned pleas and talk through the impact of climate change but, crucially, they detail the hard-fought and still-ongoing quest to even get world leaders to pay attention. Such footage truly can speak more than a thousand words, as the old adage goes. Stopping rising temperatures and the environmental conditions they bring really shouldn’t be a battle, after all, and little helps cement that point as firmly as the sight of crowds of thousands waging that war because they have to. 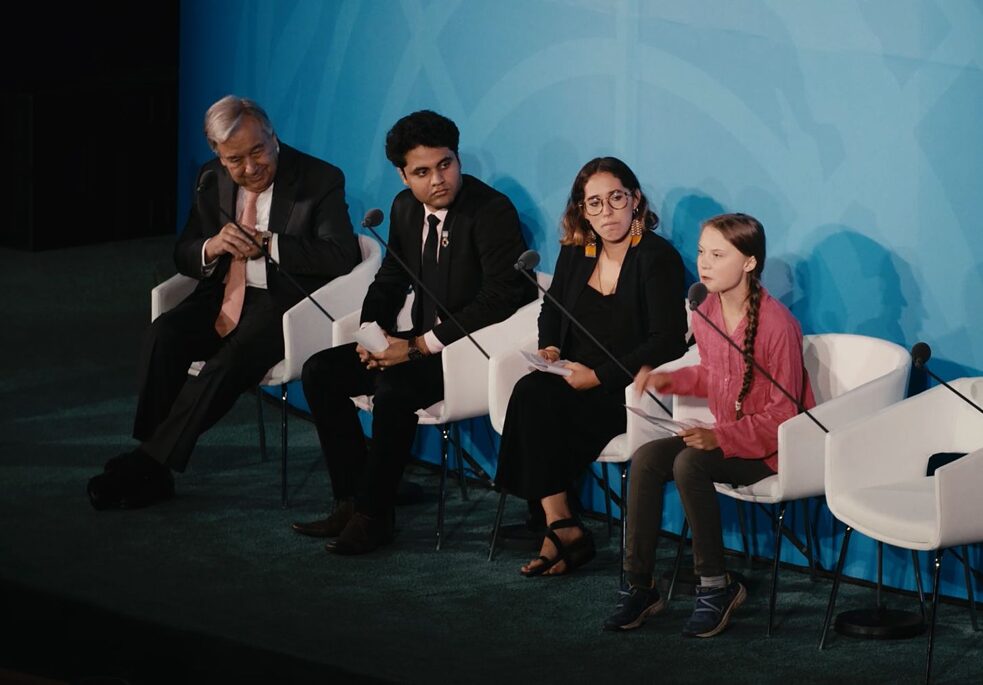 SURVEYING THE NEXT GENERATION OF ECO-ACTIVISTS


As both I Am Greta and Wild Things did (the former in full, the latter in part), NOW dedicates its frames to today’s young activists. As Thunberg routinely mentions in her addresses and interviews, 21st-century teenagers and twenty-somethings don’t want to spend their time trying to convince their elders to do what’s right, but it’s the only way they can see themselves having a future. The Swedish activist casts a shadow over NOW — her speeches are featured, the film’s interviewees sing her praises and attend her rallies, and some have even worked with her — but this documentary roves a wider eye over the youth activism scene. Luisa Neubauer leads the German leg of Fridays for Future, the weekly school strike movement. Marcella Hansch founded Pacific Garbage Screening, which aims to help clean up the planet’s oceans. Nike Mahlhaus and her environmental group Ende Gelände stage civil disobedience actions in German coal mines.

They’re just three of the feature’s array of subjects, with German photographer-turned-filmmaker Jim Rakete using his directorial debut to celebrate their stories, weave in on-the-ground footage, garner contextualizing expert input, and also gain the perspectives of Nobel laureate Muhammad Yunus, musician Patti Smith and film director Wim Wenders. The latter inspires one of NOW’s most obvious edits, switching from the acclaimed auteur’s face to the Berlin Victory Column that features so heavily in his 1987 masterpiece Wings of Desire; however, there’s unmistakable power in this single cut. Elsewhere, Rakete includes ample vision of Berlin, and of protests on its streets throughout 2019. Thousands of people walk, shout and hold placards, and stand out amidst the city’s landmarks. The Berlin Victory Column is one such well-known sight, with NOW encouraging viewers to see it in two modes: as a monument towering over a constant fight for humanity’s survival that spreads far and wide and, just by featuring Wenders in the documentary, as the place where Wings of Desire’s infatuated angel Damiel (the great Bruno Ganz) peered down at the world, fell in love and ultimately decided to forsake his immortality to walk among the masses.

TACKLING A GRIM SITUATION WITH HOPE


In Wings of Desire, when Damiel makes his choice, it’s motivated by love and hope. NOW is also driven by the latter emotion, even if it might seem at odds with the bleak scenario painted by climate change’s worsening impact, not to mention the stern figures that speak to earth’s declining plight. With a photojournalist’s eye, Rakete perceives the reality, but he also knows how to frame it. He doesn’t shy away from the data by any means, or the situation as it is, but he also chooses to let Luisa, Marcella, Nike and their fellow activists’ passion shine through. Accordingly, he enlists experts such as economic anthropologist Dr Jason Hickel to make it clear how much needs to change to reverse the influence of global warming — and not just physically, but in our entire approach to the production, distribution and consumption of goods and services — while showing what NOW’s determined young subjects are doing to enact that kind of shift.

That’s a potent combination. Blending a dense but accessible rundown of the facts with details of the fight, it’s inspiring as well. As its title conveys, drastic action is needed immediately to stop a future that no one wants, so NOW hones in on the spirited quest to make that happen. It shows that everyone can do their part in different ways, too, a message that can’t be underestimated. In the process, Rakete also turns a largely straightforward movie into an ambitious and astute addition to the expanding climate change documentary genre.

NOW is showing at the online edition of the 2021 Transitions Film Festival from February 26, 2021, supported by the Goethe-Institut. Tickets are available here.