Rainer Werner Fassbinder casts a shadow over the 2021 German Film Festival via Enfant Terrible and Berlin Alexanderplatz — with the former film directly bringing his life to the screen and the latter a new interpretation of a book that Fassbinder famously adapted.

It couldn’t be more fitting that one of Rainer Werner Fassbinder’s best-known and most acclaimed projects is named Berlin Alexanderplatz. The title comes from Alfred Döblin’s 1929 novel — but, just as the city's TV tower does over the busy and sprawling city below, Fassbinder looms large over German cinema. Almost four decades have passed since his death at the age of 37, leaving more features to his name — over 40 — than most directors manage in a lifetime twice as long. Time hasn’t tempered the potency seething through his work, nor his status as Germany’s prevailing point of cinematic reference.

The filmmaker is rarely far from a screen, whether his creations are lighting up a theatre again or another filmmaker is dancing with his shadow — by exploring his tumultuous tale, or by endeavouring to walk in his footsteps. At the 2021 German Film Festival, amidst 40th anniversary celebrations of Lola, one of the three features in Fassbinder’s BRD Trilogy alongside The Marriage of Maria Braun and Veronica Voss, the director’s impact proves inescapable. Where Enfant Terrible engages directly, dramatising his filmmaking life in an unflinchingly warts-and-all biopic, the latest version of Berlin Alexanderplatz brings fresh eyes to a text so memorably adapted by Fassbinder as a 14-part television miniseries.


When a filmmaker spends a decade and a half making 44 movies and TV series — and directing 15 plays as well — anyone who endeavours to tackle their story faces an unshakeable dilemma. In making Enfant Terrible, director Oskar Roehler and screenwriter Klaus Richter are overwhelmingly spoiled for choice, or at least for research materials and cultural reference points; however, they’re also simultaneously forced to confront an already-pervasive image of their prolific subject. As this biopic’s title makes plain, Fassbinder’s reputation is as famous as his work ethic. It’s impossible to know if his filmmaking pace might’ve been slower or his creative vision changed without the drugs and sex and chaos that marked his private life, but his is the near-quintessential tale of a shining talent burning bright, strong and all-too-fast.

For audience members who already know that walking into Enfant Terrible, the film proves happy to recite the obvious. It dramatises the ups and downs of a workaholic who boasted that his day had 26 hours, and of a creative who keeps his entourage of actors, crew members and hangers-on both shocked and in awe. It never glosses over Fassbinder’s spiky edges, or merely celebrates him as a tortured artist. But it’s also content enough to just tread in his shoes — or, to be precise, to let Oliver Masucci strut, scowl and snort, clad in little more than his underpants, all while frequently and cruelly lambasting and terrorising his inner circle.


Best known of late for his role in Dark, Masucci doesn’t much resemble Fassbinder. He’s also more than a decade older than the man he’s playing was when he died — and over three decades his senior in the character’s early scenes — a fact that can’t be passed off as excess-driven wear and tear on-screen. But, alongside Roehler’s decision to stage his movie on stylised sets that call attention to the theatricality of it all, Masucci’s hulking impersonation is impossible to avert your eyes from.

Enfant Terrible flits between various points in its subject’s life, but is far more interested in Fassbinder’s behaviour and reactions than his professional successes or even struggles. No matter the acclaim or hatred showered his way as he hops from Munich to Berlin, Cannes and New York, he keeps working, drinking, doing cocaine and cycling through a series of lovers, and also refusing to toe anyone’s line but his own. The film explores his fated relationships with Ali: Fear Eats The Soul’s El Hedi Ben Salem (Erdal Yildiz) and bartender Armin Maier (Jochen Schropp), as well as his influence over actor Kurt Raab (Hary Prinz), and yet the most important connection it examines is between Fassbinder and his own impulses — desires and actions that Masucci conveys as effortlessly as breathing, even if everything about Fassbinder screams of force.


If Enfant Terrible leans into the engrained image of Fassbinder with gusto and glee — an image that has only solidified as documentaries keep bringing him back to the screen — then, in adapting the same Alfred Döblin’s 1929 novel he once did, Berlin Alexanderplatz swerves in the opposite direction. Writer/director Burhan Qurbani knows that Fassbinder’s name will always be mentioned alongside the book’s title, and that any subsequent adaptation will earn obvious comparisons. He keeps the brooding, moody tone in his new take on the story, but thrusts the tale into his own terrain.

Qurbani's setting is obvious, with Berlin's famous TV tower a frequent sight in the distance. No one is a tourist here, though. Instead, Francis (Welket Bungué) is a new arrival from Guinea Bissau, and his fraught trip across the Mediterranean Sea is just the beginning of his difficult journey. The source material dictates that he’ll spend time in prison for murder, but that isn’t the catalyst it traditionally has been in this narrative. As the breathy voiceover explains, Francis wants to be a good man. He wants to start a new life in Berlin, and make the most of his surroundings after spending his entire life so far as a refugee. Alas, he’ll find himself tested, including by everyday discrimination, in the toxic friendship he sparks up with unhinged drug dealer Reinhold (Albrecht Schuch) and in the romance that springs with sex worker Mieze (Jella Haase) after he falls into her care following a traumatic accident. 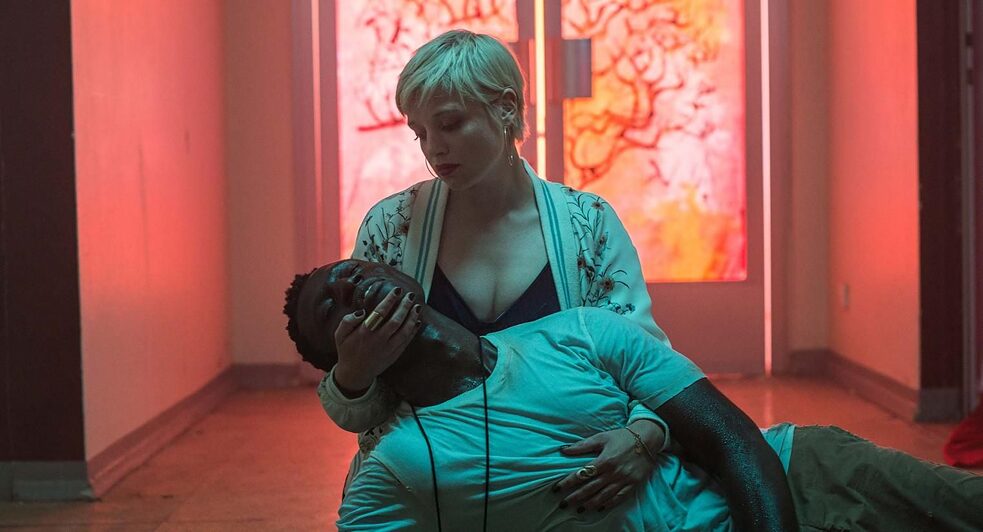 Jella Haase and Welket Bungué star in Burhan Qurbani's version of "Berlin Alexanderplatz" | © Berlin Alexanderplatz Qurbani doesn’t point the camera towards the Brandenburg Gate, or stroll through the Tiergarten, or peer up at the Berlin Victory Column, but this vividly shot film captures Berlin’s atmosphere. It thrums with the pulse of a city that’s always on edge, and always moving — a city that Francis, who’ll soon be rechristened Franz, might lose himself in if he isn’t careful. Charting his ambitions to live a worthy life, and the costs paid and sacrifices made as reality inevitably intervenes, Berlin Alexanderplatz is a film about choices and the forces acting both for and against them. It ponders both the yearning to be a person of substance and the futility of trying to chase any dreams when life will always have other plans. And, although it can’t match the scope or breadth of Döblin’s text or Fassbinder’s TV series, it spins a compelling, albeit heavy-handed, story nonetheless.

The movie’s visual sheen doesn’t just colour Berlin’s gritty underbelly in vibrant hues, with neon lights aplenty, but exposes how all the shine that sparkles in Francis’ eyes ultimately proves empty. Qurbani approaches the material with energy, too; however, he’s best served by his cast. In the wily Bungué, the feature finds a powerful, soulful and conflicted anchor. In Haase, it has a gentle but resourceful heart. And in Schuch, who turns in a masterfully villainous performance, it delivers an insidious manifestation of desperation and opportunism allowed to run its course.

Head to the German Film Festival website for session times of Enfant Terrible and Berlin Alexanderplatz in your capital city.