Across an eight-episode run that’s currently streaming on SBS On Demand, international drama Shadowplay steps inside a fractured Berlin that’s both reckoning with the cost of World War II and just beginning to contemplate what life looks like on the other side. The highlight amidst the rubble: German star Nina Hoss, who brings her trademark texture and depth to her pivotal supporting part.

In what remains of Berlin in the summer of 1946, in eight-part TV drama Shadowplay’s vision of a city devastated by war and trying to literally pick up the pieces, women who’ve lost almost everything band together to form neighbourhood police forces. They administer law and order partly because there’s no one else to do so and partly because it’s something for them to do; World War II wasn’t kind to them, so playing this part in the German capital’s slow reconstruction is a case of grasping onto the small things that can make a difference. At the head of one ‘scarecrow’ constabulary sits Elsie Garten, a woman who is as haunted by the past as she is determined to find a path forward — and who proves both plucky and fragile because she’s played by the inimitable Nina Hoss. Elsie isn’t the series’ lead character, but she’s what viewers clasp onto, because even a supporting performance by Hoss is a wonder worth building an entire show around.

Shadowplay’s central point of focus is New York City cop Max McLaughlin (Taylor Kitsch), who has been seconded to Berlin’s American sector to help Elsie and her scarecrows — so named because they don’t wear uniforms — as they endeavour to evolve from a citizen brigade to a professional policing outfit. But behind his broad NYC accent sits a secret he isn’t that fussed about keeping, with Max only taking the posting because he’s searching for his AWOL elder brother Moritz (Logan Marshall-Green). Complicating his stated and clandestine missions is crime baron Dr Werner ‘Engelmacher’ Gladow (Sebastian Koch), who tricks raped women into working for him after helping them with abortions; American vice-consul Tom Franklin (Michael C Hall), a smarmy career diplomat who likes to dabble in toying with both the British and the Russians; and Tom’s UK-born wife Claire (Tuppence Middleton), an unhappy socialite who takes a quick shine to Max. There’s also the difficult matter of Max and Moritz’s tragic past, and of the latter’s new calling, with the ex-soldier so traumatised by being among the first to liberate the Dachau concentration camp that he’s taken to dispensing his own brutal punishment upon Nazis. 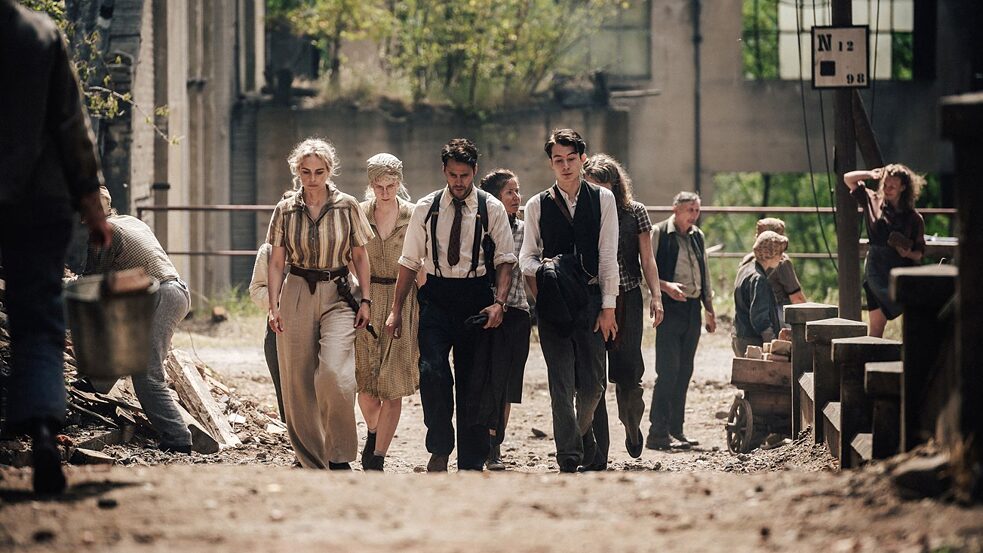 
As more than seven decades of screen stories have done before it, and countless future years will continue to deliver as well, Shadowplay contemplates a cascade of topics that’ll never stop being relevant. It ponders what war asks of, and takes from, absolutely everyone touched by its horrors; what it draws out of people that wouldn’t have been sparked otherwise; and how anyone manages to live, or struggle to, when the conflict and its consequences will always cast a shadow over every second of their futures. Via its layered narrative — something that comes as no surprise given that creator Måns Mårlind and his co-director Björn Stein also have Nordic noir hits The Bridge and Midnight Sun on their resumes — it also makes good on its title, filling its frames with stealthy deeds and covert acts that spread like spidery tendrils through Berlin’s darkness. But the series always leans in one firm direction, even if that isn’t always by design. There’s much within each and every episode to capture the audience’s attention, whether detective tales, revenge quests, survival stories or the aftermath of World War II piques one’s interest; however, it’s Hoss that Shadowplay always and inescapably gravitates towards.

Max keeps being pulled towards Elsie, too. She’s a rock amongst Berlin’s rubble that hasn’t yet crumbled, even though that’d be easy to do. She’s ready to form a new foundation instead, in fact. And, from their first meeting early in the program’s debut episode, her quiet influence upon him plays a significant part in his character arc. That said, Hoss’ imprint upon Shadowplay isn’t simply a product of the script. As 2020 Berlinale competition entry My Little Sister also demonstrated, the rightly acclaimed German actress can turn any part into a beguiling masterclass in steeliness and vulnerability — and makes every role, large and small, feel as if it’s unique, gives new shades to recognisable emotions and struggles, and is so fleshed out that whichever character she happens to be playing at that very moment could walk right off the screen and into reality. With heightened intrigue, surreptitious scheming and serial killers driving most of its plot, Shadowplay doesn’t generally boast the type of traits that Hoss always brings when she’s demanding the camera’s gaze. But every time she’s in the centre of the frame, working through Elsie’s pain and perseverance, she lifts the entire show. Long-term fans will see shadows of two of her most famous performances for Christian Petzold, Barbara and Phoenix, in her efforts here. Even just glimpsing Elsie in a bombed-out Berlin brings the latter movie to mind. Hoss never merely repeats herself, though, and Shadowplay smartly doesn’t ever ask her to.


The padding around the gem


Shadowplay wrings highlights out of the bulk of its cast. Kitsch turns in one of his best performances since Friday Night Lights brought him to fame 15 years ago, Marshall-Green makes the most of his suitably shadowy part, and Middleton ensures what could’ve been a cookie-cutter role has depth, for instance. Consistently impressive rising star Mala Emde — fresh from her powerful lead portrayal in 2020 German Oscar submission And Tomorrow the Entire World — proves one of the series’ secret weapons. She plays Karin Mann, a waitress raped by American soldiers, then trapped by Engelmacher into doing his dirty work after she seeks his help with getting revenge on her attackers. In the process, she adds further texture and additional shades to one of Shadowplay’s underlying fascinations, with the series exploring how Berlin’s women have been forced to cope with everything the war has brought their way.

Indeed, Karin’s part in the storyline evokes the same response as Elsie’s, because both feel like the show’s true core. Everything around them — and especially around Hoss’ phenomenal performance — can resemble mere padding, even with Mårlind’s tight and twisty plotting, the series’ handsome production design and lensing, and an obvious aim to tell more than just the usual World War II tales.

If you are resident in Australia, you can stream Shadowplay on SBS On Demand here.