Streamable content
Ecocide presents an impassioned environmental ‘what if?’ 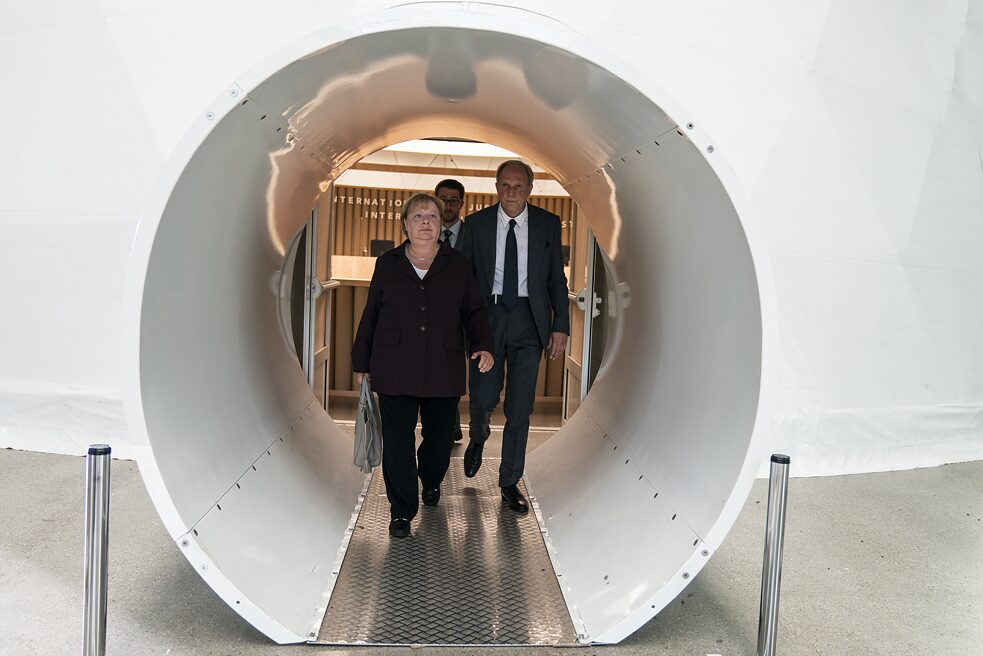 After directing 2017 documentary Beuys, writer/director Andres Veiel now ponders the future anger that could be directed at today’s ecological decisions — and the politicians behind them — in this Transitions Film Festival selection.

Long is the list of films that explore the future consequences of humanity’s current actions, with the science fiction genre filled with movies that predict dystopian horrors to come thanks to poor choices made now. Indeed, 2022 marks the year that one such famed vision is set, and thankfully the narrative of Soylent Green hasn’t quite come to pass in reality — but hypothesising where abysmal environmental choices may lead us is a sci-fi move that remains as powerful as ever. Ecocide adapts the general concept, but gives it a twist. It isn’t interested in musing on the bleak day-to-day reality that may greet us in the year 2034, but in the price that future generations may wish to exact from today’s leaders. Humanity remains its own worst enemy in this blend of eco-thriller and legal procedural, which is set in the International Court of Justice, but the humanity of tomorrow wants its predecessors to pay for their actions.

Made for German television and initially airing in 2020, Ecocide imagines the world in just over a decade, when 31 countries that’ve borne the brunt of the earth’s changing climate seek justice. Dubbed ‘the Global South’, the group takes the Federal Republic of Germany to trial in International Court of Justice, with sizeable damages and a ruling in their favour their desired outcome. Their accusation: that Germany had a duty to enact climate change policy that would help mitigate the warming planet, and therefore protect human life and shelter it from the worst of the environmental fallout. It isn’t a fanciful notion, or one simply dreamed up by writer/director Andres Veiel, who helms the film fresh from making 2017 documentary Beuys. Thanks to a Dutch Supreme Court judgement in 2019, there’s a real-life precedent for Ecocide’s train of thought, with the verdict in that landmark case decreeing that the government of The Netherlands was legally responsible for taking appropriate actions to save its citizens from climate change’s life-threatening consequences.

Veiel uses his film to envision how such a court case against Germany might play out, and to examine and conceptualise how the legal system might have a key role in forcing nations to act. The latter is a crucial element of Ecocide, with a movie-sized game of ‘what if?’ arising as a result. But the feature is also a vehicle to sift through the German government’s policy choices, as well as the corporate behaviour that has been emboldened and allowed courtesy of those decisions. The more that its 90-minute running time ticks by, the more apparent it is that Veiel and his co-writers Jutta Doberstein and Thomas Wendrich see their movie as a mechanism for informing their audience about the moves made, or not, that’ve already had significant environmental repercussions. Attacking that task, Ecocide and the team behind it couldn’t be more unflinching or impassioned.

From Germany’s existing plan to phase out coal-fired power plants by 2038, four years after the film is set, to the historical ways that the automobile industry has navigated new climate-minded legislation, Ecocide spills out the details of decades of decisions via its courtroom setup — and, unsurprisingly, it’s a dense film. It’s an angry movie, too, also understandably, as it works through its considerable catalogue of information. Often it unfurls its facts with the future versions of past and present leaders (veteran actress Martina Eitner-Acheampong plays Angela Merkel, for instance) weathering the Global South’s onslaught of data and fury. Using a gleaming, almost clinical set, Veiel has an eye for making a visual imprint, as surveying a trial over a country’s climate policy is designed to; Ecocide isn’t an aesthetically breathtaking or striking feature, but the image of litigating today’s ecological decisions in tomorrow’s courts leaves a lasting impression.

Lawyers plead their cases, including Larissa Meybach (Friederike Becht) and Wiebke Kastager (Nina Kunzendorf) for the Global South and Victor Graf (Ulrich Tukur) for the defence, but Ecocide cares about people en masse more than its individual characters. Veiel and his co-writers endeavour to flesh out their key players and their motivations just enough, largely to ramp up the film’s sense of tension; however, their focus is firmly on the feature’s big creative risk. It’s a bold move to make a movie that’s fuelled by so many facts, figures, statistics, legislation and case studies that it’s often one small step away from a documentary or a dramatised lecture. Accordingly, Ecocide always feels ambitious, even if it is also feels far too data-heavy. The intensity behind the film is always palpable, too, as is the vigour with which Veiel and his collaborators advocate for making meaningful changes now rather than resorting to relying upon legal action later.

Ecocide is available online as part of the Transitions Film Festival. Screenings can be purchased here.

Click here to find out more about the Transitions Film Festival.