Although eco-friendly, ethical, and sustainable fashion has only been a recent awakening for the global fashion industry, Bangladesh has been a quiet champion practicing it in silence for multiple generations.

The values of slow fashion or upcycling aren't anything new. We have been raised with the ideologies of conserving, saving, and respecting nature from a very young age.

I grew up in a joint family where the practice of hand-me-downs played a vital role. This was evident as I would see my grandmother, mother, and aunts would all wear each other's (handed down) sarees and kamizes. They adored each other and although they would never admit it then, it made each shaggy sharara that much more special. As I was coming of age, my fashionable model and actor aunt gradually began to trust me with collections from her wardrobe. Now, I have a closet which is a time machine pulling from some of the most interesting period pieces of the last four decades.

This stands true for most households back in the day. Turn the clock back ten years and we were using old sarees to make kanthas or quilts every winter and repurposing oldies but goodies to make new ones. Frankly one of our most important artisanal heritages, if I may say so, was sewing for our family. Weaving a community through craft and tradition, was no small task. Quilting itself has been around for centuries. From the times of the pharaoh to the burning crusades of 12th century Europe and from 18th century colonial American grandmothers to my grandmother, quilting has been an art form to capture the essence and stories of great civilizations and small families alike. The cloth we weave is not just a commodity or a statement we bought off some designer’s rack, but it is the very fabric that binds us together. Tattered sarees and time-honoured traditions have united communities and cultures across time – don't just take my word for it.

Global textile production emits 1.2 billion tonnes of greenhouse gases annually. Bangladesh produces up to 350,000 tonnes of waste garments, which equates to one fourth of the production it makes ending up in a landfill or being burnt (according to Reverse Research 2017). Bangladesh is the second largest readymade garments manufacturer in the world. Doesn't this mean we hold just as much accountability?
Last year, global brands such as Burberry, Gap, H&M, Kering, Levi’s, and Inditex have decided to pledge to a series of industry-wide commitments that includes a target of 30 percent greenhouse gas emission reductions by 2030 . (Vogue, 2019)

Therefore, as a Bangladeshi fashion designer and owner of my own circular fashion brand, Broqué. I wanted to check my responsibility and uphold my culture and time honoured traditions by taking a chilly winter trip to one of the most beautiful and historically important parts of Bangladesh – the north, from Dinajpur to Rangpur and back.

As I sat on the airplane, I had no idea of what to make of this solo trip except for the fact that I needed to find a common thread to link my post graduate thesis on sustainable textiles in Bangladesh, research for the fine people at Goethe-Institut's feature on Bangladeshi culture, and find an ethical vertical integration opportunity for Broqué. So, I narrowed down my research to focus on the artisanal marvel of hand embroidery and our history of producing natural dye for textiles in Rangpur.

Artisans of the North 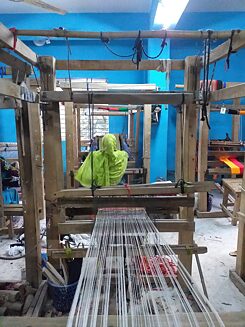 Satranjihandloom factory in Rangpur | © Mahenaz Chowdhury Home of amazing artisans who have handed down the art and skill of quilting and hand-embroidery over hundreds of generations. Rajshahi, Rangpur, Dinajpur, Lalmonirhat, and Saidpur are some of the areas that I was able to cover physically or through interviewing the people I met during the trip.

The versatility in the craftsmanship and form of work I got to witness over just a week, was mesmerizing and reassuring to say the least.

Satranji is one such form of traditional handloom fabric weaving, making mats and rugs, which dates back to 1830 AD and is a core craft element of  Rangpur.

The north has been an integral part of Bangladesh in terms of harvesting a leguminous plant called legume. This plant is then processed to produce the natural indigo dye.During the British colonial period, a heavy tax was imposed on the farmers to lease the land and seeds to grow legume. On the other hand, very low prices were given for the indigo dye. As a result, this created a vicious cycle of increasing debts for the farmers. As a collective community, they decided to stop producing this dye and rid themselves of this debt cycle from 1940 onwards. We had not produced this dye since a certain turn of events a decade ago. 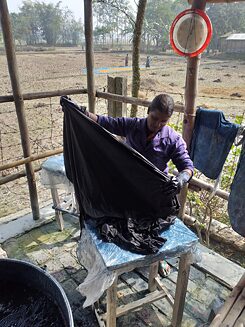 Indigo dying process | © Mahenaz Chowdhury In the region of Rangpur, generations had completely erased any memory of the indigo dye production and the shortcomings of a colonized region. Murtaza, Project Lead of Living Blue Bangladesh and a proud local, sits across the table from me at Care Bangladesh HQ in Dhaka as we sip tea and enlightens me with this incredible story of a lost art and how they played an important role in reviving the north. Casually and coincidentally laying the seeds that sprouted my Goethe getaway. 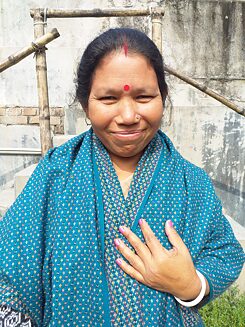 Sona finalist of Loewe Craft Prize 2017 for her white on white peacock quilt pattern taking a full 2 to 3 months to complete one kantha | © Mahenaz Chowdhury The best part of my trip was when I met the extraordinary weavers who create beautiful designs and textures to keep this culture alive. Traditionally, the women of the household would bring in extra income for the home through taking on commissioned kantha work from the neighbourhood. Each of the colourful personalities had a volume of strength and wisdom to share with me regarding their practices and how they still manage the entire household and get on with their kantha stitching jobs. They took great pride in their work but worried that the newer generations, their children and grandchildren, had no interest in craftsmanship and wanted nothing to do with heritage

“Foreigners and Bangladeshis living abroad care more about our traditions and artisanal craftsmanship than people in our own communities.” says warm and compassionate Sona Rani who I connected with immediately over the hot pink nail polish that she had painted her nails.

In fact, to my surprise every one of the ladies had their own distinct and individual fashion statements, wearing prints and patterns representing different regions of the north. Surprised because international fashions are more or less the norm these days and modern identity a globalised cornucopia of ideas and beliefs. So, to find people so rooted in the cultures of their home was indeed a rare find for a city girl trying to make her mark on the world. Truly humbling.

Next, I was able to take a quick tour of the Living Blue facilities which gave me an opportunity to check out the sustainable practices they had in place. They produced stunning colours for their beautiful fabrics out of the most unexpected sources – eucalyptus, betel nut, banana, and onion to name a few. The water reservoirs from the dying plants are made available to the farmers in the area free of cost for re-use to irrigate their crops. The organic nature of the process allows for such a seamless integration
.
I ended my trip with delightful local experiences and tasty local treats, specials only available in Rangpur. Chingri chops (shrimp fritters), kebabs in a bun by the street, and hot sundried shidol regional shutki (dried fish) at the Living Blue Kitchen. With my heart, head, and belly full, I returned to jolly old Dhaka.

The traditions and values we hold are crucial in building future conscious generations. I hope our stories of heritage and conservation are carried forward as a beacon of hope and future potential.

But one thing is clear. We need to protect and preserve our heritage of kantha stitch, natural dying and handloom fabrics. It impacts not just localities but future generations and the direction of our communities' culture and values. 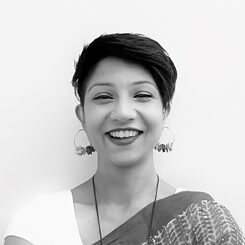 Mahenaz Chowdhury Mahenaz Chowdhury, creator and artist at Broqué. While obtaining a master’s in Environment Science & Management, she lives and creates in Dhaka. Mahenaz is a Local International 2020 batch graduate, a programme funded by the German Federal Foreign Office.