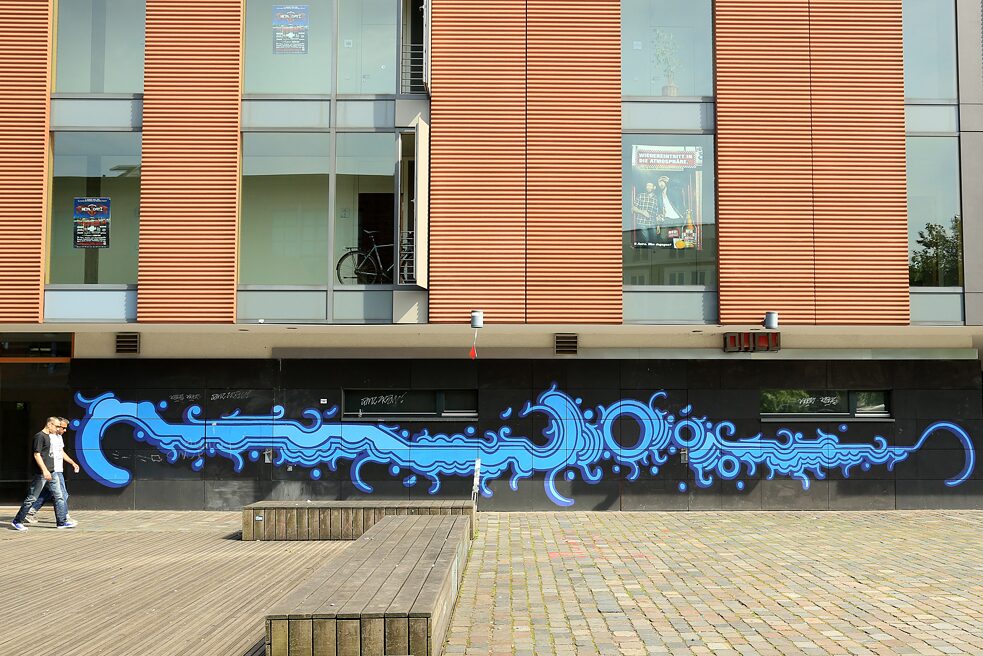 José Augusto Amaro Handa, also known as Zezão, is from São Paulo. In the nineties he embarked on a mission as a graffiti artist to bring more color and light to the underworld. His style is unmistakable – and normally consists of variations of his signature word “Vício” (i.e. vice) in blue.

Inspired by the art of Jean-Michel Basquiat, Zezão felt it was legitimate for his art to leave the familiar trails and blaze new ones. He works in sewage tunnels, gullies, abandoned building ruins, in dead-end streets and the dark spaces beneath bridges in order to make these places more visible. Over time, he has also built up stocks of more and more materials: he salvaged everyday items from trash and then reassembled and painted them. To this day, he uses timber taken from barricades in São Paulo for his wooden collages, or uses what he finds on the street - like mirrors, trays, car doors, bedframes and the like – as the basis.

Turning trash (Brazilian: lixo) into luxury (Brazilian: luxo) is what Zezão’s works are all about. What emerges are many-layered puzzles comprising all kinds of political and social aspects such as poverty or violence, as well as aspects relating to the environment. This is because he sees his link to run-down neighborhoods, buildings fit only for demolition, contaminated water, smog and dirt, and the reuse of discarded items, as contributing to the general debate of issues such as sustainability and recycling.


Art in the vicinity of garbage, the bodies of dead dogs and broken pieces of furniture on the fringes of society – Zezão sparks a dialogue between the underworld and the surface world because he wants to be debated. The word vício, which he translates as addiction, marks the starting point for his typically abstract signatures in blue, a kind of secret message and an attempt to mediate between the underground and the surface.

He has already staged numerous exhibitions in his homeland of Brazil, especially in Rio de Janeiro and São Paulo. His graffiti also adorns walls, sewers and viaducts around the globe. He has already exhibited in places such as New York, Hamburg, Prague, London, Florence, Los Angeles, Paris and Sydney The vício signature is reminiscent of bubbling water under pressure that splashes onto his backgrounds like from a faucet. Though it is not clear whether water is really being portrayed or whether it constitutes merely an aesthetic borrowing. There is in any case a strong link – Zezão is passionate about working with water as an activist for the Water is Life project. Its aim is to improve the supply of drinking water for everyone, especially those living in developing areas. Each year, over one billion people get sick from consuming contaminated water, yet such diseases can be eliminated by modern technology. According to the project website,  2.5 billion people lack sufficient access to proper sanitation and 1.8 billion lack safe drinking water. The project hopes to improve these shocking figures – by providing donation-funded wells or filtering methods such as the Sunspring it developed itself and the portable Clean Sip Straw.