Mother sighed with exasperation. ›Look, there aren't any people in charge of death. When you die you move to another part of London, that's all there is to it. Period.‹

Will Self – The Quantity Theory of Insanity

»Going down« – each time the elevator announces its prophecy, a little shudder hits me. For what we know it will go down, break through the hotel’s floor, the car park’s unflattering concrete shell and deeper, through the bones and the gravel, the smiling teeth of witnesses that didn’t get to speak, down to compressed plants and animals united in revery, crouched together, awaiting the approaching abyss and, layer over layer, progressed into the future that it is now. Ground floor. All off. I lift the curtain, open the door, the sun hits me, it commands: I look down.

The ice age is coming, the sun is zooming in / Engines stop running, the wheat is growin' thin / A nuclear era, but I have no fear / ‘Cause London is drowning, and I, I live by the river.

In 1928, the Great Flood of London flooded big parts of the inner city. Mostly working class and the poor, living in cramped basements close to the river, fell victim to it. It sparks first planning ideas of a barrier on the Thames. Only in 1974 constructions took off. The Thames Barrier has been in operation since 1982. It is these barriers that make the land safe enough for the rich.

Long Water leading up to Hyde Park. A map: You are here. Hide and Seek.

The old trees are fenced, the little green parrots dream of summer. Follow a horde of tourists into the bushes.

A group of trees and fluffy white clouds form an atomic mushroom.

The Physical Energy Statue where Watts didn’t choose the rider as carefully as the horse. Allegoric phantasm of the patriarchy, blinded by the sun. The dictates of the sun: The horse rears up. A nuclear era, but I have no fear.

Kensington Gardens. A sanctuary for waterfowls and moths.

Please do not feed the squirrels; […] Grey squirrels cause extensive damage to trees by stripping bark from the main stem and branches.

The Cinnabar moth caterpillars can turn cannibalistic. This is mainly due to lack of food. Often, very few survive the pupal stage, mainly due to finishing the food source before reaching maturity; many will die from starvation.

Pass the Peter Pan statue. When Peter has faith in his ability to fly, he is able to escape through the window of his London home and returns to Kensington Gardens. A crow lets him know him that he is still more of a human than a bird and somehow stuck in between – »Betwixt-and-Between«. Only now that he knows, only now that he stops believing, he is stranded in the gardens. He discovers a world of magical inhabitants that appear after »Lock-Out-Time«.

I leave the gardens, pass Paddington station and walk towards Regent’s Canal.
Construction sites: Waterfront living with the world at your feet.
Renderings of things to come.
Christmas music everywhere.
Holidays are coming. This is the season, it’s always the real thing.
A line of tourists buses, one of them named Collins, I misread it as COFFINS first.

It’s only in the Rembrandt Gardens of Little Venice (a cropped image on a tourist’s digital camera; the impudence of the claim) where I really enter the wetlands of London: Smells of fresh leaves on the ground, fresh paint coming from the boats, fresh weed from under the bridges.

A bench: Derek Caves’ Friends Have Placed This Here for you to enjoy watching the little Venice he loved so much.

Please help keep the Gardens clean and attractive by observing the following.

The Jubilee Greenway along the Regent’s Canal.
Cyclists Dismount
Warning: Razorwire
Social housing up on the other shore.
Low grey-blue skies, palm trees to the left, houseboats to the right.

According to the city of London, the waterways are home to at least 4,000 to 5,000 residential boats. About 10,000 people live on the water. While some use these boats for luxurious short-term stays, others, unable to afford London’s rents, live on them in desperate conditions; a dozen on one small boat, sharing one chemical toilet and limited access to electricity. 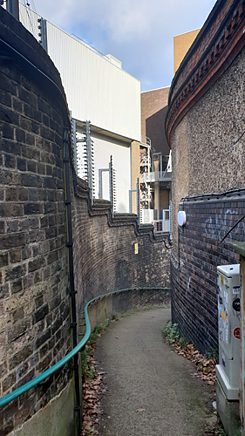 Crossing Edgware Road.
National grid
St. John’s Wood 275kV Substation.
Danger 275.000 Volts
A small pathway between old brick walls and cables that transport energy leads down to the
canal: Lisson Grove.
Semi-public spaces, the backyard of the boats, at land.
A tree trunk on a deck.
The name of the boat is Romulus.

The road at Lisson Grove was once one of the main Roman thoroughfares. When the Romans arrived, the broad grassy way had already been used by the Britons for centuries, linking the English Channel with the inland. The Romans paved the road and set it up it for centuries to come. It was used as a boundary of many historic administrative units. After industrialisation, Lisson Grove became an unloading point for barges delivering coal to the adjacent electricity station.

More signs, they are not a threat, they are a warning:

When the area developed into a crossroads for goods and passengers during the industrialisation of the 19th century, it became one of the extremely poor, run-down neighbourhoods of London, known for crime, drinking, and prostitution.

The character Eliza Doolittle in George Bernard Shaw’s play Pygmalion that inspired the musical version My Fair Lady was born and raised in Lisson Grove, living in a room that »wasn’t fit for a pig to live in«. 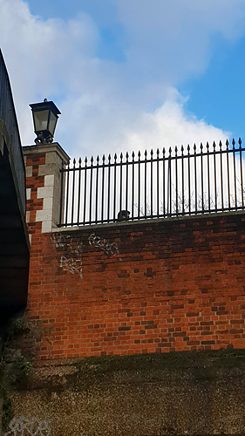 In 1885 the case of Eliza Armstrong, a 13-year-old who is sold to a brothel keeper in Lisson Grove for £5 caused a public outcry. The deal was staged by investigative journalist W. T. Stead in order to get a new criminal act for the protection of girls and women passed. While the criminal act got passed, Stead himself got imprisoned in the aftermath. The street in Lisson Grove where  Eliza Armstrong lived at got renamed in order to restore its reputation. W. T. Stead died 27 years later when the Titanic sank.

Until the 21st century, Lisson Grove remained a territory of rivalling gangs, Lisson Green Mandem believed to be on the earliest of them. In 2007, after the murder of Jevon Henry, most likely connected to gang rivalry, five gang members of Lisson Grove have been jailed for life.

A grove is a group of trees that grow close together. It is an old English word dating as far back as 1,000 years ago. The origin of the word is unknown. In pagan, pre-Christian Germanic, Nordic and Celtic cultures, groves were considered sacred. 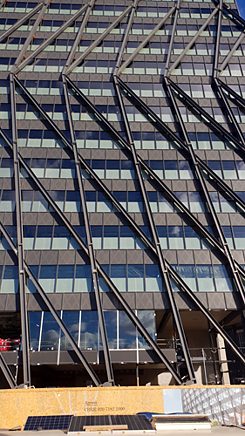 Metal bridges hanging low, townhouses to the left.
Trespassers will be prosecuted / Guard dogs on Patrol
In the woods on the other side of the river, a tent and fragments of emergency blankets.
Traces of the former rope grooves, like guarding marks along the banks.
No Skating / No Cycling
Columns hold up the bridge, a rectangular coffin-shaped cardboard box, abandoned on the other bank.

Onwards, pass the great Mosque, the biosphere reserve of the Zoo, leading up to Camden, up the canals, the sad tourist markets, and overcrowded bridges, until they are left behind. Further North, inland, the water disappears.

go to Part I: Holloway