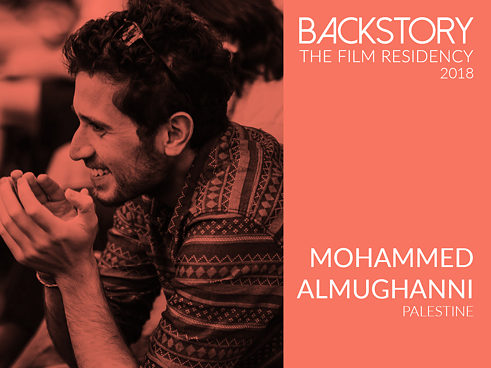 Mohammed Almughanni is a director, screenwriter, and cinematographer. He was born in 1993 in Gaza. He is a student of Film Directing at the Film School in Łódź. He returned to his homeland as a director to tell the story of the communities living in the shadow of the Israeli-Palestinian conflict. He is an author of documentary and feature films, including "Falafala" (2018), "Where’s the Donkey" (2018), "Operation" (2018), "Maria" (2015) and "Halawan" (2012). His previous documentary "Shujayya" (2015) won numerous film festival awards.

After graduting from the American University of Beirut, Mohammed plans to go to Europe to enroll in a 4 years medical programme. He starts working as a biology teacher in Burj Albarajneh refugee camp, that way he collects 400USD each month. After finishing school, Mohammed works as a taxi driver. His family is trying to make him stay in Beirut and get married but he wants to go to the Polish embassy to apply for a visa.

Almughanni's knack for compelling narrative and gripping visuals exhibits a high-level consistency regardless of the different styles he approaches.
His works are ever-so-consumed by his Palestinian origins and not surprisingly concerned with themes of mobility, identity, and self-betterment.
This new project builds on Mohammed's relationship to Poland where he pursued his cinema studies, to draw semi-biographical parallels with his character's aspirations to leave a refugee camp in Lebanon and aim for a medical program in Europe. This Beirut residency will afford Mohammed access to his research and project development within a community of film professionals but also a Palestinian extended family on the other side of an otherwise impenetrable border.