After almost five years of living in what the Lonely Planet once referred to as “the coolest little capital in the world”, I am still not quite sure what exactly it is that makes Wellington so special to me. Part of the city’s magical charm, though, is without a doubt its stunning natural environment: the rugged coastline, native bush and local wildlife.

Audio wird geladen
For the past four years my daily commute to work has been characterized by the sweet scent of jasmine, the lush green of ferns and trees, a colourful orchestra of native birds and, not to forget – a considerable change of altitude, which is almost always rewarded by a breathtaking view.


Besides coming to terms with Wellington’s hilliness, I have learned that the city has most certainly a unique sonic identity – the tui (a native bird) being a major voice of the urban orchestra.

Apart from Wellington’s natural wonders, the city claims to have more cafés, bars and restaurants per capita than New York City. Particularly the “Cuba quarter” presents an colourful melange of cafés, bars, restaurants, music venues, op shops, ateliers, music retailers and tattoo parlours, which reinforce the city’s status as a vibrant and creative destination. Frequently there are buskers and other performers roaming the streets, blending into the urban (sound) environment – such as this flute player who performed next to the “Bucket Fountain” in the centre of Cuba Street.

Flutes and fountains: busking by the buckets… 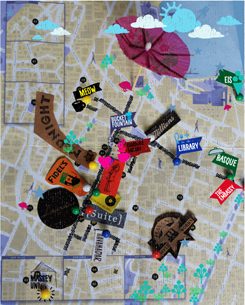 Kartendesign © Neat Places Ltd.
Even after five years of exploring the city’s culture and music scenes there are always some new and exciting audio-(visual) treats to be discovered; such as last week’s Sound Synaesthesia event, which took place at the Wellington Museum and showcased an eclectic blend of vinyl delights, reaching from Turkish, Indian and French tunes to Reggae, Krautrock and American Country. 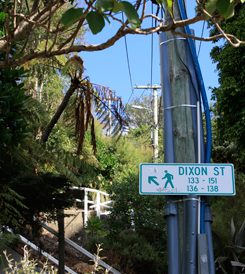 © Katie Rochow
The sounds were complemented by specific olfactory and gustatory titbits such as sweet tea, spicy curry, cheese or sauerkraut. It wasn’t really until I left Germany that I realized the frequent appearance of German language in foreign cultures. Sauerkraut wasn’t the only word that made the rounds that night – the upcoming Oktoberfest, Wellington’s “Bavarian Showdown”, was a hot topic, including Hefeweizen, Dirndl and Lederhosen. I thought I would maybe join the festivities for the first time this year – but I didn’t. Probably because Wellington always has plenty of cultural treats on its plate - so I never really feel a craving for Sauerkraut, Dirndl or Lederhosen.