Please pre-register Burhan Qurbani talks with Roy Grundmann, Professor of Film at Boston University about his new interpretation of Alfred Döblin’s classic novel. Qurbani’s award-winning adaption (Silver Bear at last year Berlinale, 5 German Film Awards) reimagines the petty criminal, Franz Biberkopf as an illegal immigrant from Guinea Bissau while Rainer Werner Fassbinder made the story relevant by simply presenting it as a period piece, leaving the audience to draw their own parallels between the divided Berlin of that time and the depressed Weimar Republic city of Doblin’s novel. 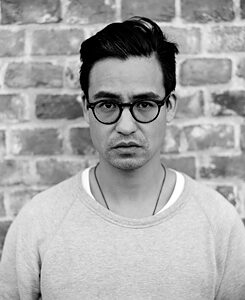 ©Malik Vitthal Burhan Qurbani was born in 1980 in Germany after his parents moved there in 1979 as political refugees from Afghanistan. His father was a civilian employee in the U.S. Army and so Burhan grew up in different cities all over Germany. In 2002, he started studying film directing at the Filmakademie Baden-Württemberg. For his short films he received the Short Film Prize of German Film Critics, the German Camera Prize for best short and the “Black Pearl” for the best upcoming filmmaker at the Middle East International Film Festival in 2008. His graduation film, Shahada (2010), premiered in competition at the 60th Berlinale in 2010 and was critically acclaimed and awarded at many festivals around the world. His second feature, We are young. We are strong (2014) opened the competition at Rome IFF and Hof IFF and received multiple awards worldwide. ©Mark Hennessey Before earning his graduate degrees in the United States, Roy Grundmann studied film and literature in Germany and England. Focusing on film in its modernist and postmodernist context, he publishes on American and European narrative cinema, international avant-garde film, film theory and cultural theory, and gay and lesbian film history and queer theory. He is the author of Andy Warhol’s Blow Job (Temple University Press), the editor of A Companion to Michael Haneke (Wiley-Blackwell), and a co-editor of the four-volume The Wiley-Blackwell History of American Film. Grundmann is the curator of several landmark film series, including the first comprehensive retrospective of the films of Michael Haneke. Grundmann’s publications have appeared in numerous journals and anthologies. He is a contributing editor of Cineaste magazine.