On behalf of our partners and sponsors, I would like to thank you all for joining us for the 16th edition of the German Currents Film Festival 2022!

This year's festival took place from October 21 - 23 as an in-person event with screenings at the American Cinematheque and the Goethe-Institut. German Currents 2022 opened Friday, October 21st, at the Los Feliz 3 Theatre, with the LA Premiere of acclaimed director Andreas Dresen's multi-award-winning  RABIYE KURNAZ Vs. GEORGE W. BUSH, based on Rabiye Kurnaz's real-life fight to free her son from Guantanamo Bay. Opening night continued with the west coast Premiere of director Natalia Sinelnikova's debut feature film,  WE MIGHT AS WELL BE DEAD, which opened the program Perspective Deutsches Kino at Berlinale 2022.

German Currents continued on Saturday at the Goethe-Institut with the LA Premiere of veteran Filmmaker Andreas Kleinert's DEAR THOMAS, an intimate portrait of the East German artist and provocateur Thomas Brasch. Saturday closed with the LA Premiere of PRECIOUS IVIE. This multi-award-winning drama from Writer-director Sarah Blaßkiewitz focuses on a young Afro-German woman searching for her true self. The Goethe-Institut also hosted the return of the beloved annual family matinee with a screening of Christian Theede's THE PEPPERCORNS AND THE SECRET OF THE DEEP SEA, a family-friendly adventure filled with courage, humor, and action. a family-friendly adventure filled with courage, humor, and action. The Goethe-Institut also welcomed classes from the Goethe International Charter School on Monday for a special school screening the PEPPERCORNS, presented in cooperation with our educational outreach partners, Creating Creators.

This October also marks our one-year anniversary in our new location in this diverse community. We are grateful for the deep connections we have made in the community and are happy to have celebrated this milestone with our wonderful German Currents audience.

We look forward to seeing you next fall at German Currents 2023!​

All the best,
Lien Heidenreich-Seleme & the German Currents team 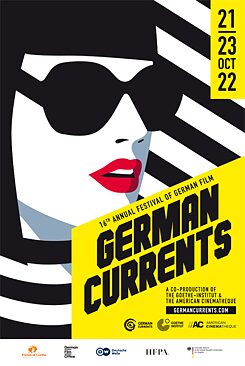 
The German Currents Film Festival is produced by the Goethe-Institut Los Angeles and the American Cinematheque in kind cooperation with the German Consulate General, and with the support of The Friends of Goethe, The Hollywood Foreign Press Association, the German Film Office, and media partners Deutsche Welle.