Bauhaus 100
Walter Gropius’ Bauhaus principles: In his own words

In 1954, renowned Sydney architect Harry Seidler invited the Bauhaus founder Walter Gropius to Australia. During his visit, Gropius delivered a speech to the national broadcaster, ABC, as guest of honour. Seidler’s wife and professional partner, Penelope Seidler, has provided the full transcript of this speech to Goethe-Institut Australien. Although well over half a century old, the speech still resonates today, as it discusses the struggle between art and the unstoppable march of technological advancement.

“What do you imagine will be the design character of your future cities, buildings, and everyday goods? Do you feel confident that the world will experience one day a specific Australian regional character of architecture, derived from your landscape, your habits and your own culture, developed through native creativeness? All civilised countries, which have gone through the inevitable social revolution of our period, are faced with this same central cultural problem of how they may regain – with contemporary means – that unity and beauty of pre-machine cultures lost in the industrial upheaval.

No doubt most people are still deeply confused by the struggle between traditional and modern conceptions of design so evident in our cities and houses. I remember that before this last war the modern trend in architectural and industrial design was curiously enough branded by the Nazis as “Bolshevistic“, by the Russians as being of “western bourgeoisie“, while democratic countries were sitting on the fence.

What sort of architectural forms flash through your mind as being truly modern? Perhaps flat roofs, large windows, cantilevered slabs and concrete wings hovering on stilts? Well these are only some of the outward characteristics of modern functional design. But if we look closer we discover that design has changed from inside out in accordance with human social progress and with the development of our new means of production, not in accordance with this or that transient fashion or form of political government. Its new spirit has put the emphasis on conceiving a more freely developed house plan and on using skilfully the great gains made in science and technique. In all civilised countries the roots of modern design have meanwhile struck through the quicksand of fluctuating fashions into solid cultural ground. Its sound principles established by a generation of pioneer designers have evolved already such standards of excellence as cannot be destroyed by transient political powers. Is this a symptom that we are standing at the threshold of a new culture?

If such contemporary standards of design already exist, however, why then are the forms of so many houses and every-day goods here, as well as abroad, still contradictory in their character, ignoring often what we may call our new language of vision? Has perhaps the sweeping speed of the spiritual and intellectual revolution of our time surpassed the limits of human adaptability? For although our intellect is capable of quickly grasping the significance of changes, we have to go a long way to transform new knowledge into widely recognised form, into definite habits of art expression. The process of transformation in our time seems to be fast and radical indeed compared with the prevalent attitude towards art and design in the last generation.

The social revolution caused by the invention and development of the machine had suddenly cut off slow regional growth of creative art. The succeeding, gigantic struggle of coming to terms with the machine and getting it under control had absorbed most of the vitality and creative power of that generation. The old conception of the basic unity of all art in its relation to life was lost in the machine revolution. A shallow “art for art’s sake“ was all that remained. The outward forms of former periods of art were borrowed and used commercially to satisfy only mentality of business being an end in itself. Good taste became a substitute for creative art. The architect turned archaeologist. Design was heading for a “slip cover“ civilisation. A trade mentality had superseded the desire for a balanced life, the work of imagination had become suspect and discreditable. But has not always the thinker, the poet, the artist determined the future trend of human, spiritual development; the man of vision and not the materialist? 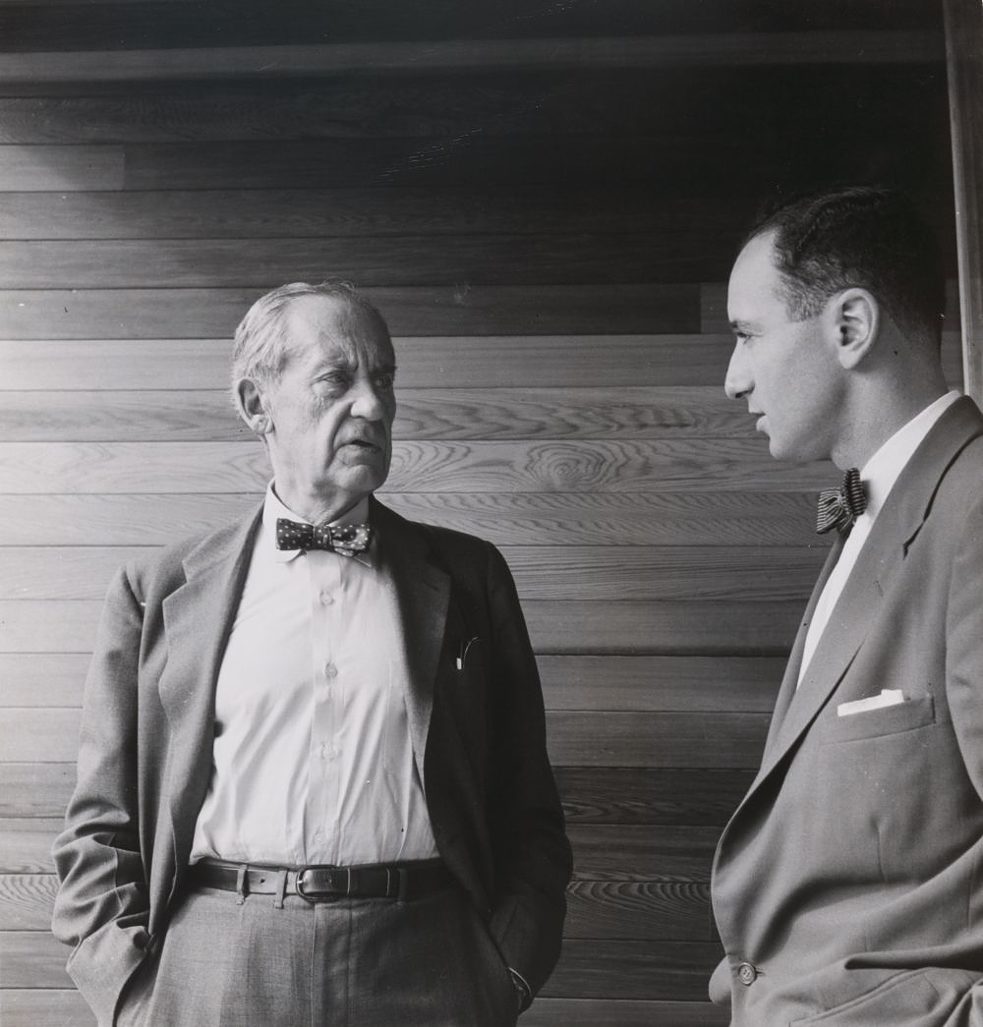 Walter Gropius and Harry Seidler, May 1954, by Max Dupain. Collection: National Portrait Gallery, Canberra. Purchased with funds provided by Timothy Fairfax AC, 2003 | Imitation had become a fatal habit, however, hard to exterminate. People humbly believed that beauty is something which has been decided upon centuries ago in Greece and Italy, and that all we can do is study it carefully and then apply it again for our own surroundings. What do we think of when we say a building is beautiful in the old classic sense – do we think of its columns, porticos and cornices? But are these the form and elements which can satisfy our own present way of life, so different from former periods. The simple epithet “beautiful“ has become the most deceiving designation. For many see beauty tied up with the achievements of the past only, as prejudice prevents them from enjoying original manifestations of living art. They succumb to the widespread superstition that buildings should be built in a style instead of with style. Instead of adapting their buildings to their innate wishes, they adapt themselves to any style to be stylish and thus lose their freedom. Enslaved by the fixed idea that beauty means period design, they are not aware that beauty, although eternal, changes its image continuously. For, as soon as we stop renewing it incessantly, it fades away. Established standards of beauty dissolve with changing standards of living: they cannot be stored away for future re-use.  Tradition does not mean imitation of the past nor the complacent acceptance of bygone aesthetic forms.

Try to scrutinize in your own dwelling the origin of form for the various parts of your household. Which ones show contemporary forms? Certainly refrigerators, bathroom fixtures, radiators, electric bulbs – but what about your furniture and your carpets, your windows and the exterior of your house? Compare your present surroundings with any original example of the Georgian, Gothic or Greek period. Did the architects and clients of those great periods ever think of imitating the style of their forefathers as we do? No: They were proud of pioneering into new form expressions of their own. Their new technical processes caused new and adequate form characteristics which they accepted. What they called tradition was a floating process of constant renewal and change of form. We misinterpret the creative sense of tradition if we try to perpetuate any one of its episodes. For its nature is dynamic, not static. For instance, the Colonial style started in England and further developed in the United States was certainly beautiful. We all love it. It expressed excellently the living conditions of its period. But our present way of living, our means of production, differ ever so much from those of Colonial times. It is a poor and weak performance to disguise the bulk of contemporary buildings behind Colonial columns or Victorian mouldings and gim cracks. Can’t we emerge from that deadening inertia and complacency towards conceptions and visions of our own?

Indeed a revolution against sentimental pseudo-art was due. A living art, vital and essential for the whole community, became the aim of a new generation of pioneer designers. They have rediscovered that man should be the focus of all design, that animation by simple means derived from natural environment is needed to rebuild new space for living, freed of aesthetic „stunts“ and borrowed adornment. Science is to be the safeguard against relapsing into aesthetic sentimentalism. Man’s scientific knowledge of himself, of nature, has to furnish the practical answers – concise and expressive – to many new requirements of life, psychological, technical and economic. Science has to control the purpose in the process of designing. But the demands imposed on the form are of purely spiritual nature. The form is not a product of intellect but of human desire and dream closely associated with the individual, with the people, and with place and time. Creative design must satisfy both the spiritual and material needs of life; it has to renew the human spirit by transforming science into art. Can there be any doubt that the quest for such a basic, organic simplicity of form, colour and function for our communities, houses and tools is a task far superior to the former rehearsal of borrowed period design with varying doses of modern flavour?

Indeed the new principles of design have already proved their soundness. Slowly but surely they will sweep away that home-sweet-home mentality of faked candlesticks slipped over electric light bulbs or of those stylish house facades which, like straitjackets, prevent a freer, more natural life of the inhabitants. Those who have withdrawn into that sentimental and outmoded dream-world will be deprived of such blessings as the easy relationship of outer and inner living space through large windows, the simplified housekeeping, the good furnishings and implements relieved of false pretences.

Already a generation ago the great American writer, Ralph Waldo Emerson, warned the American artists against imitative design. He said, ”Why need we copy the Doric or the Gothic model?...if the American artist will study with hope and love the precise thing to be done by him, considering the climate, the soil, the length of the day, the wants of the people, the habit and form of the government, he will create a  house in which all these will find themselves fitted, and taste and sentiment will be satisfied also.“ These words are as fitting today as they were then. They anticipated precisely the credo of the modern architect and designer. Here then seems to be the true spirit of tradition to guide us in the future!

Sound principles of modern design for which we have plenty of evidence are ready for use. In addition, material means in abundance are at our disposal to build modern cities and houses in the spirit of the twentieth-century man. But surely, the right mentality must be prepared first and a will to make a pattern for our communities out of the preceding pioneer work of a few.  Education must restore in our growing-up generation the conviction that beauty is a basic requirement of life and that the presence of man-made beauty in our surroundings will be an infallible sign of a mature and dignified civilisation.

The conditions created today by a highly developed science seem to present a flaming challenge that we should seize this grandiose opportunity to add quality to quantity for a final cultural success. Such a development will depend entirely on you and me, on whether the average man will be indifferent or whether he will understand, respond and act.”

To commemorate the global influence of the Bauhaus school of design, architecture, and applied arts, and to mark its 100th anniversary, the Goethe-Institut is collaborating with our Australian partners to present exhibitions, show films, bring together international artists and discuss the school’s significance with leading researchers. For more information on our 2019 program, click here.