Germany is a world leader when it comes to up-scaling sustainably grown produce. Foodtech entrepreneur Anne-Kathrin Kuhlemann is now taking "bio" to the next level, with her organic fish farm in the heart of Berlin.

The German capital’s first and only commercial fish farm, StadtFarm, is hidden in plain sight between a cemetery, a power station and a hospital in the eastern district of Lichtenberg. Three immense greenhouses form the unlikely home for a colony of African catfish, who moved into the neighbourhood in 2016. These slippery new residents form part of a self-sustaining system that produces 50 tons of fish and 30 tons of vegetables every year.

I first stumbled across the StadtFarm after seeing an ad promoting its monthly fresh food market. Always on the lookout for new and unusual weekend excursions, I roped in a couple of friends and we met at the urban farm on a crisp spring day. The small market was clustered in and around the third greenhouse, which, my nostrils informed me, contained the fish tanks. Families and foodies sampled the farm’s marinated fish skewers (hot off the barbecue), sipped organic coffee and stocked up on fresh veggies.

We were hoping to see the catfish splashing around in their new urban home. Instead, they huddled in the comforting dark of their non-transparent tanks, where they exist as part of a closed ecological system. Their waste water is pumped into the other two greenhouses, where it is used to grow vegetables such as lettuce and tomatoes. After the plants have absorbed the nutrients in the fish excrement, the water is further cleaned by bacteria, a specially designed substrate and a mechanical filter, before being pumped back into the tanks. Nothing goes to waste: Even the gunk from the filter is used to feed their worms.

One of the entrepreneurs behind this compact, inner-city food factory is Anne-Kathrin Kuhlemann. I subsequently had the chance to ask her about how this closed water cycle system came about. She explained that normal industrial aquaculture has to fully replace its tank water every week (“that’s a lot of water!”), so she and her fellow co-founders aimed to develop an environmentally friendly system that didn’t produce any waste. “StadtFarm doesn't even have a sewer connection,” she enthuses. 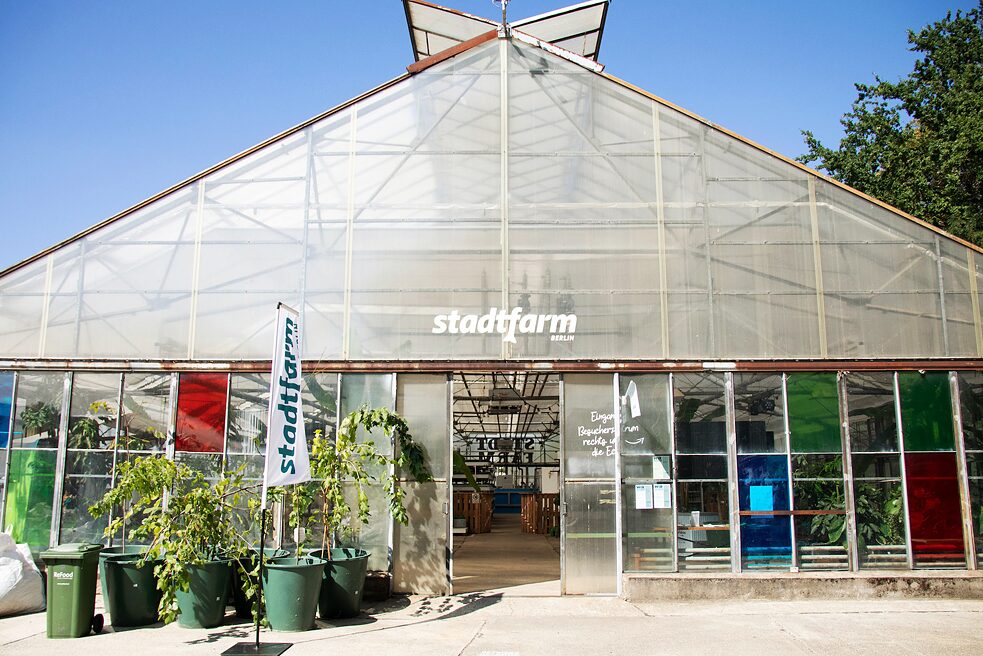 One of the greenhouses at StadtFarm in Berlin | © Mathea Millman

From Africa to Germany

So why African catfish? I’d previously only encountered this strange species in a BBC documentary, in which they flung themselves about in slow motion. Well, the clue is in their incredible adaptability. In the wild during the dry season, they survive by huddling together in the remaining puddles of water. Then, when their puddle dries up, they go in search of water by flipping and flopping themselves along the ground, protected by thick rubbery skin and an ability to breathe oxygen. The key word here is “huddling”: African catfish naturally enjoy living at close quarters, which means they can be farmed in large numbers on a very small amount of land.

StadtFarm inherited its three greenhouses from a flower farm that was built and run by the East German government during the 1980s. Kuhlemann tells me that 50 hectares of greenhouses were used to produce gerbera flowers for export to Western countries. Three of the structures somehow survived the Wende and lay derelict until StadtFarm moved into the site. 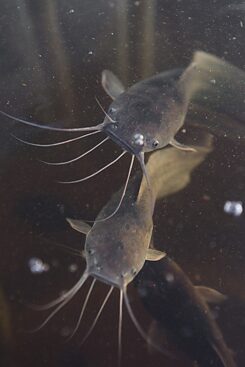 Given the world’s overfished oceans, depleted soils and the massive amount of food that goes to waste each year, it’s not surprising that the StadtFarm concept has garnered interest around Germany and abroad. The Australian Minister for Water Resources, David Littleproud, even dropped by to do a reccy on behalf of the government in 2019. Since his visit, StadtFarm has been contacted by an Australian company curious about its technology. “Hopefully those talks will move forward,” says Kuhlemann, “as the market for planet-friendly food that you can savour with a clear conscience is booming now”.

Before my friends and I left the market, I bought some smoked fish to take home for my fish-obsessed Finnish husband. He tore open the packaging in seconds, took a bite and was surprised to discover it tasted almost like pork. This unexpectedly meaty consistency could work in Stadtfarm’s favour, as organic catfish might also appeal to people who are not particularly keen on the fishiness of fish. Kuhlemann certainly hopes so: “To be really impactful, we hope people will eat less meat, and actually substitute some of their meat consumption with our fish”.

Berlin is clearly continuing to provide fertile ground for start-ups while Germany remains a driving force for green technologies and sustainable solutions worldwide. Let’s hope Australia takes a (lettuce) leaf out of the German playbook and gets real about climate change mitigation before all our options go up in smoke.