Berlin’s first reported COVID-19 case was diagnosed on 1 March, 2020. Since then, it’s certainly been a month to remember in the German capital. Infections have grown exponentially and Berliners have slowly come to realise the extent of the crisis.

Monday, 2 March – 3 reported cases
I’ve spent the past few weeks in Australia and tonight I’m flying back to Berlin. As I board the first leg of my long flight home, I slip on a FFP3 fine dust building mask that I purchased back in January to protect me from smoke haze. It feels like Australia’s catastrophic bushfires have segued seamlessly into the COVID-19 crisis.

Tuesday, 3 March – 6 reported cases
I only see two other masked passengers on that flight. While changing planes at Doha Airport, more masks begin to appear and I no longer feel like a hypochondriac. While washing my hands in the bathroom, I overhear two young cleaners talking about their colleague who had recently been off work with a fever. They joke about how it might be the coronavirus and giggle nervously. I wear that mask for 24 hours. It is a major relief to finally step outside at Tegel Airport and take the bloody thing off.  On my way home the taxi driver mentions the cancellation of ITB Berlin, the world's largest tourism trade fair, which was due to start the following day. The decision will likely put a dent in his income and leaves me with a lingering sense of unease.

Sunday, 8 March – 40 reported cases
In Berlin I slip back into my usual routine, albeit with increased hand washing. I work at my shared office, host a dinner party and go to the cinema.  But with every passing day the news becomes increasingly dire. 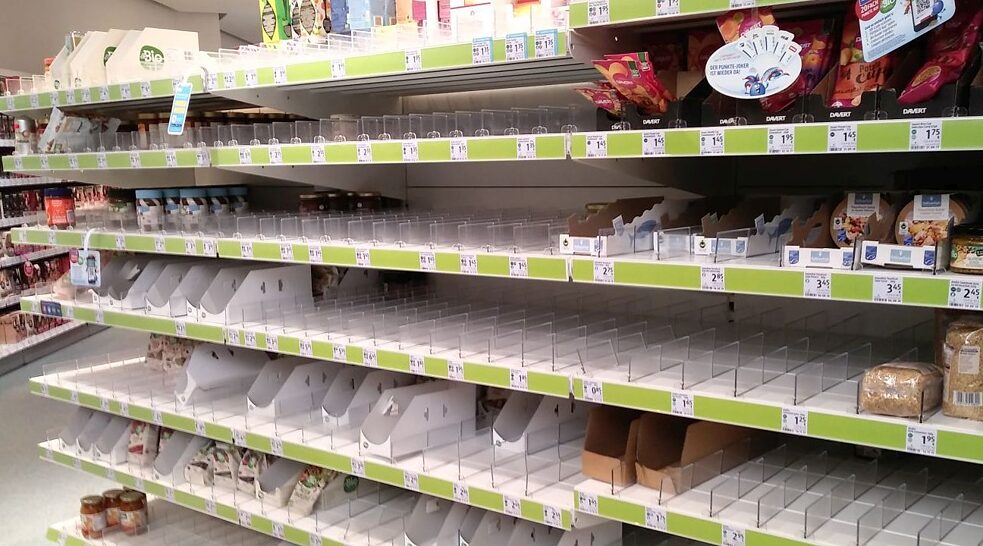 Empty shelves at a DM store in Berlin | © Brianna Summers Wednesday, 11 March – 81 reported cases
This Saturday my husband and I are supposed to be travelling to Poland for a minibreak. Despite the “business as usual” atmosphere in Berlin, we’re weighing up the pros and cons of going. What if we get sick at the hotel? What if Germany announces a lockdown while we’re away and we get stuck in Poland? We decide to cancel. Two days later, Poland closes its borders to all foreigners. Delving online for more breaking news, I read that Berlin’s most famous nightclub, Berghain, will close until at least 20 April.

Thursday, 12 March – 118 reported cases
I’ve now been back in Germany for a week. The shops are bustling, toilet paper is flying off the shelves, people are still going to work at my co-working space and meeting their friends in pubs. I’m beginning to feel wary about sitting in close quarters with others and decide to work from home. My husband, who is also a freelancer, works from home today as well. Although we don’t realise it now, this is Day One of our self-isolation.

Saturday, 14 March – 263 reported cases
Keen for some fresh air, I decide it’s safe to venture out for a short bike ride. I have quickly developed a quarantine mentality and am surprised to see how many people are out and about, eating ice cream in groups and hanging out at cafes. I don’t see a single face mask. Am I overreacting? Tonight we’re invited to a friend’s birthday dinner. Surely this is safe, right? Four people having dinner at someone’s flat? He ends up cancelling, because one of the guests has a sore throat. I feel relieved.

Monday, 16 March – 332 reported cases
I jump on nebenan.de, a social media platform that brings together residents living in the same neighbourhoods. My spirits are buoyed by all the generosity and solidarity on display. People are offering to help their elderly neighbours and others in high-risk categories by doing their grocery shopping or walking their dogs. I also discover a new website called Coronaport, where people can offer or request help at the click of a button.
Of course, not all older people use the internet. Recognising this, the non-profit organisation Moabit Hilft has drafted a form called Corona Neighbours, which can be printed out and hung in the entrance of shared residential buildings. Neighbours willing to lend a hand can write their name on the list, so that those in need can request assistance by putting notes in their letterboxes. 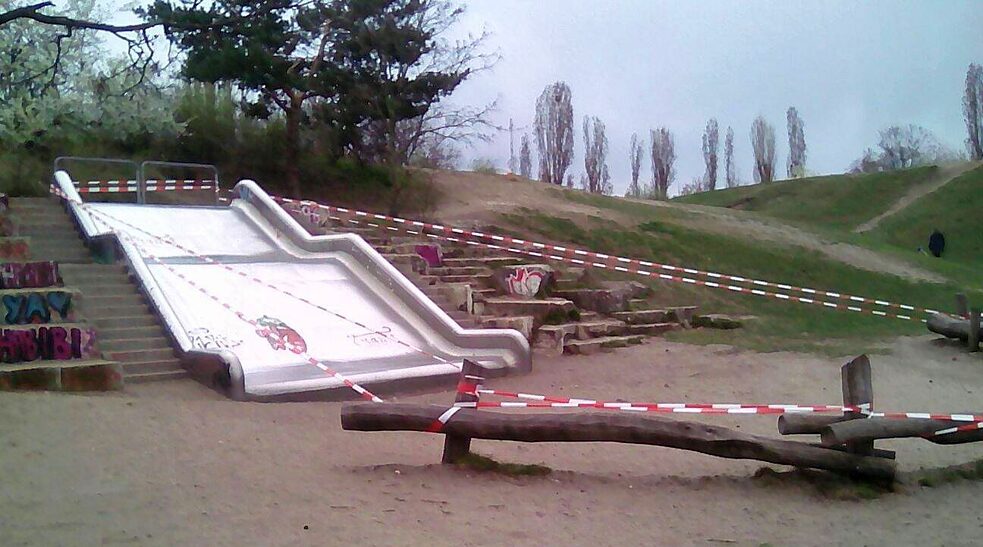 Cordoned off playground at Görlitzer Park in Kreuzberg | © Jenny Hackney Wednesday, 18 March – 519 reported cases
This evening German Chancellor Angela Merkel makes an emphatic speech to the nation. The core message: this is serious and must be taken seriously. She calls for solidarity and discipline as she announces the federal government’s new emergency measures that are designed to shut down public life and slow the spread of the virus. All non-essential shops will close, as well as all cultural and educational institutions. There will be no more sporting events, trade fairs, concerts or religious meetings of any kind. Even playgrounds are off limits. In Berlin, only three S-Bahn lines are still running. Restaurant opening hours are now 6:00 AM to 6:00 PM. Fresh food markets can stay open, but the city’s iconic flea markets will disappear for the foreseeable future. Vitally, there will also be immediate financial support available for businesses and the self-employed.

Thursday, 19 March – 688 reported cases
What a strange week this has been. As I work, the silence is punctuated only by the chirping of birds and the sirens of ambulances racing along the main road near my flat. I cycle to my office to pick up a few last things. It is a gorgeous spring day and families cluster around ice cream shops, older couples sip coffees in the sun and groups stand around waiting for buses. I see just two masked faces. I can only imagine the frustration felt by Berliners who have spent much of the last four months indoors escaping the cold. They’ve just made it through the city’s infamously grey winter, only to be told to stay home. It must be a bitter pill to swallow.

Saturday, 21 March – 1,025 reported cases
Four friends and I spend Saturday evening together on Skype. It’s so good to see their faces again and we all can’t stop smiling. I have the feeling this is the first of many such “get-togethers”.

Wednesday, 25 March – 1,645 reported cases
The federal government has announced further restrictions that will apply for the next two weeks, but, thankfully, an Italian-style lockdown is not (yet) going ahead. Public gatherings of more than two people are banned. Restaurants must close or exclusively offer takeaway and home delivery. You can still go outside to exercise if you are alone or with members of your household, but you must carry ID and proof of your address. Who knows where things will go from here. Despite the uncertainty, I feel reassured by Germany’s clear and (mostly) uniform response to the crisis. Let’s hope the social distancing and financial measures help to “flatten the curve” and keep people afloat over the weeks and months to come.