To the untrained eye, Mauerpark looks like an abandoned lot. This grungy yet hugely popular green space is renowned for its sprawling flea market, open-air karaoke and historic significance as a former site of the Berlin Wall. Every weekend it attracts a cavalcade of tourists, locals, families and freaks. And now, thanks to the completion of a major redevelopment project, there’s twice as much room to party.

Like so many of Berlin’s gritty and beloved locations, Mauerpark was born in the 1990s. It hails from an era of squatted flats and underground techno clubs, social disruption and creative renewal. Mauerpark (literally “Wall Park”) is situated in Prenzlauer Berg on the site where the Berlin Wall and its infamous death strip ran north from Bernauer Strasse. The park’s rundown, DIY aesthetic and “anything goes” vibe has proven an enduring formula for success.

I used to live around the corner from Mauerpark. My flatmates and I sometimes hung out there after work to enjoy a few kiosk beers and some excellent people watching. After locating a patch of grass not completely fouled with broken glass and cigarette butts, we would settle in and wait for the show to begin. Buskers and street performers competed for acoustic dominance and there was always at least one person wearing vaguely medieval getup juggling with Diablo sticks. Plumes of acrid smoke rose from barbecue coals doused with lighter fluid and, up on the hill, graffiti artists sprayed and resprayed the park’s remaining section of the Berlin Wall. 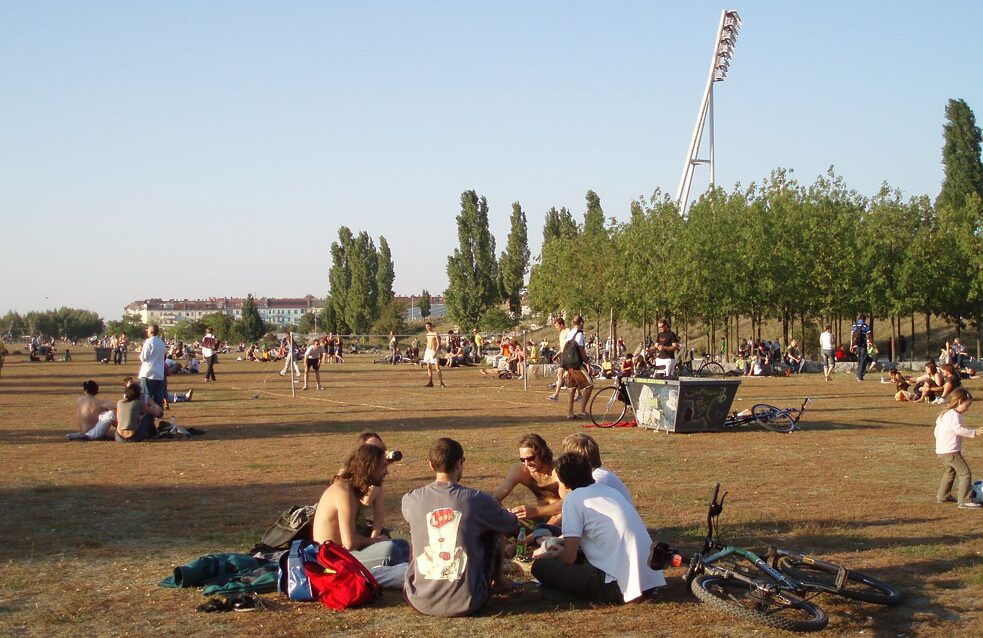 Mauerpark in 2006: The flea market was just two years old and there was no public karaoke | © Brianna Summers

From utilitarian beginnings to tourist magnet


Today’s filthy party park was originally a military parade ground, then a freight yard, before becoming some kind of commercial area after WWII. A few train tracks and an old potato hall are all that remain of this early history. When the Berlin Wall was erected in 1961, the eastern section became a heavily patrolled stretch of land between the inner and outer walls: the death strip.

After German Reunification the city commissioned landscape architect Gustav Lange to turn the former death strip into a park. Lange’s creation opened on 9 November 1994, exactly five years after the fall of the Wall. Berlin didn’t have enough funds to purchase and redevelop the western section, which remained the property of a special administrative body that manages Germany’s federal railway assets. The western half was fenced off and always seemed abandoned to me, although apparently parts of it were rented out for the storage of building materials.

The basketball half court and stone amphitheatre in 2008 (left) and 2020 (right) | © Brianna Summers In 2004 the southwestern corner was leased to a flea market organiser, thereby ushering in the next stage in the evolution of this iconic site. Mauerpark began notching up rave reviews in blogs and travel guides. People flocked to the market, smoked weed amongst the weeds and basked on the sunny hillside that rises up towards the Friedrich-Ludwig-Jahn-Sportpark. Sometime in 2009 an Irish bike courier starting bringing a portable sound system to the park’s stone amphitheatre every Sunday afternoon. Bearpit Karaoke is now an unstoppable cultural phenomenon: adored by the flea market crowds and tolerated by the park’s neighbours.

Bizarre juxtaposition of old and new


I moved away from Prenzlauer Berg at the start of 2010 and Mauerpark fell off my radar. Years passed. Unbeknownst to me, the space continued to mutate and expand. Like a one-celled organism undergoing mitosis, over the past three years the park has replicated itself and doubled its size. The newly minted western section was unveiled in June this year and is anything but an identical copy of its parent cell. Freshly laid lawns, smooth asphalt walkways and a shiny new playground are just a few of its bells and whistles. Even the cracked and cobbled flea market area has undergone a major facelift. 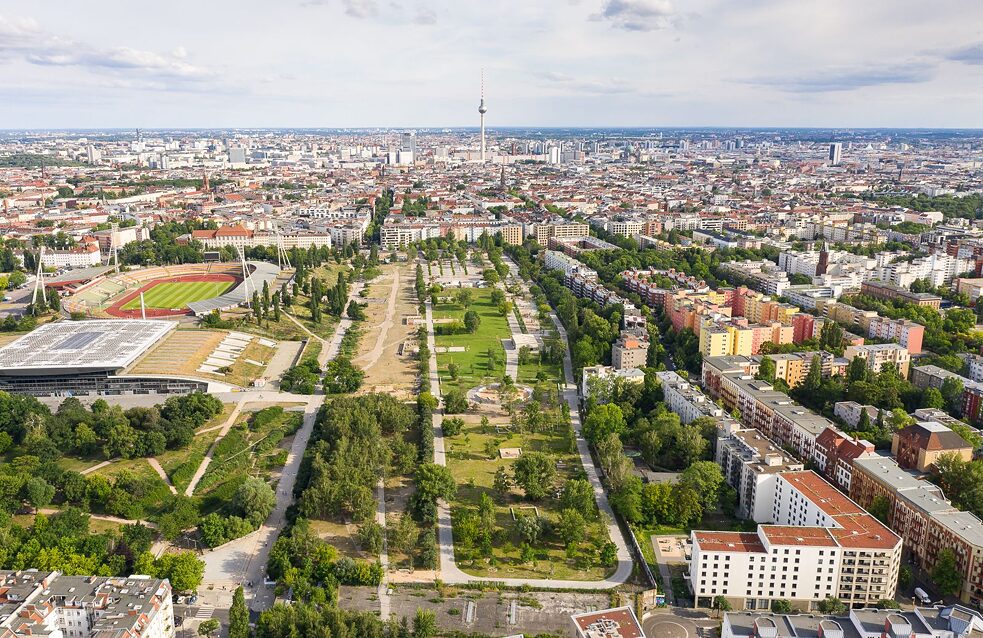 Mauerpark’s older eastern section (left) and the newly developed western section (right) | © Archiv Grün Berlin GmbH While there are clear stylistic references to the older east side, such as the granite block arrangements and large wooden swings, the redevelopment has more in common with Kreuzberg’s modern and manicured Gleisdreieck Park. I guess it’s not surprising: both were designed by the Grün Berlin Foundation. Like Mauerpark’s west side, the seven-year-old Gleisdreieck green space also rose from the ashes of a former freight (and mail) yard.

Returning to Mauerpark in 2020 was a surreal and nostalgic experience. I sat on a clean hunk of granite in the lush new section and surveyed the balding scrub on the other side. I saw 23-year-old Brianna perched on the hill, wearing a black hoodie and tapping away on her Nokia 3310. For others who have lived in Berlin longer than me, it must be like looking through a wormhole to the 1990s. Over at the amphitheatre, some kind of open mic “speakers’ corner” had drawn a reasonable crowd. The adjacent half court was, as always, full of young men shooting hoops. While in the redeveloped area around me, families picnicked on the immaculate lawn and a man jogged past pushing an expensive pram.

Unlike other (maligned) aspects of Berlin’s gentrification juggernaut, I think it’s safe to assume that this redevelopment and beautification project will be well received. Surely even the diehard fans will appreciate the expanded space for their extended drinking sessions, not to mention those pristine stone blocks just waiting to be tagged.