Bicultural Urbanite Brianna
Pandemic holidays: Making the most of summer

This summer many Germans are holidaying in Germany. The Baltic Sea coastline is rammed and short-stay rentals are booking out around the country. I too opted for a local getaway to avoid the virus-related risks of international travel. Instead of Barcelona or Barbados, I hopped on my bike and cycled 400 kilometres through Bavaria.

The perils of the pandemic have caused a surge in domestic tourism. When school holidays kicked off in June, beach-loving Germans stormed the country’s coastline. The most popular seaside villages became so overloaded that several motorway exits were temporarily closed to prevent further sun-seekers from joining the fray. By August, overcrowding in Berlin’s recreational areas led police to issue warnings, tweeting that the city’s “parks, lakes and public swimming pools are bursting at the seams”. 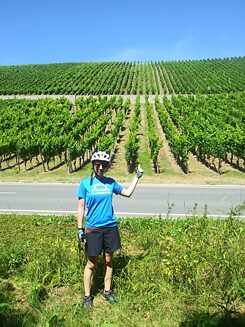 Last year 26% of German holidaymakers travelled within Germany and in 2020 this figure could reach 40-50%, according to the Stuttgarter Zeitung. Those who decided to spend the summer here in the capital are doing what they can to cool off in the face of yet another European heatwave. Relatively relaxed coronavirus restrictions mean that Berliners can largely pursue their usual summer activities: Beer-drinkers float down the Landwehr Canal in dinghies, bikini-clad women lounge in parks and families fling themselves into lakes. However inner-city swimmers now have to head online to secure coveted slots at the city’s public pools.


With the virus flaring up around Europe, my husband and I decided to spend the summer break exploring our own backyard. By which I mean Bavaria. Our last-minute “she’ll be right” approach to trip planning led us to randomly select the Main River Cycle Route for our two-week escape. I subsequently discovered that this “five-star cycling trail” is very popular among retirees and envisaged us trundling along in a slow-moving cavalcade of grey nomads. In reality, we were among a fairly small number of cyclists who had decided that pedalling a combined 50 kg of camping gear nearly 400 km in 35 degree heat was a winning formula for rest and relaxation. Traffic did pick up on the weekends however, when unburdened day trippers breezed past flashing encouraging smiles. 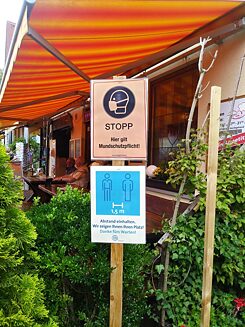 Going to the pub is a different proposition in COVID-19 times | © Brianna Summers Two weeks in the saddle gave me plenty of time to study German cycling fashions. Functional clothing abounds and there is a prevalence of couples wearing matching outfits, which Germans refer to as “Partner Look”. We, too, were guilty of this fashion faux pas. Our limited clothing supply meant that we both often rode wearing a blue t-shirt and black shorts, like an amateur husband and wife Tour de France team that had failed to garner any meaningful sponsorship deals. Similarly attired duos cycled past grinning and nodding at us, either in greeting, solidarity or amusement. Naturally, I also spotted the native German MAMIL (middle-aged man in Lycra) racing along solo or in pairs. And I can report that the latest trend among local commuters is a surgical mask dangling from the wrist or elbow—an unwelcome reminder of the New Normal.


Despite the presence of such corona accessories, it was easy to forget about the pandemic while freewheeling past vineyards, fields and forests. Clusters of families swam in the river and sunbathed on burnt grass with minimal regard for the 1.5-metre rule. The real reminders that the world had changed lurked in the restaurants, ice cream parlours and campsites, where hand sanitiser flowed freely and “mouth-nose protection” was mandatory indoors. 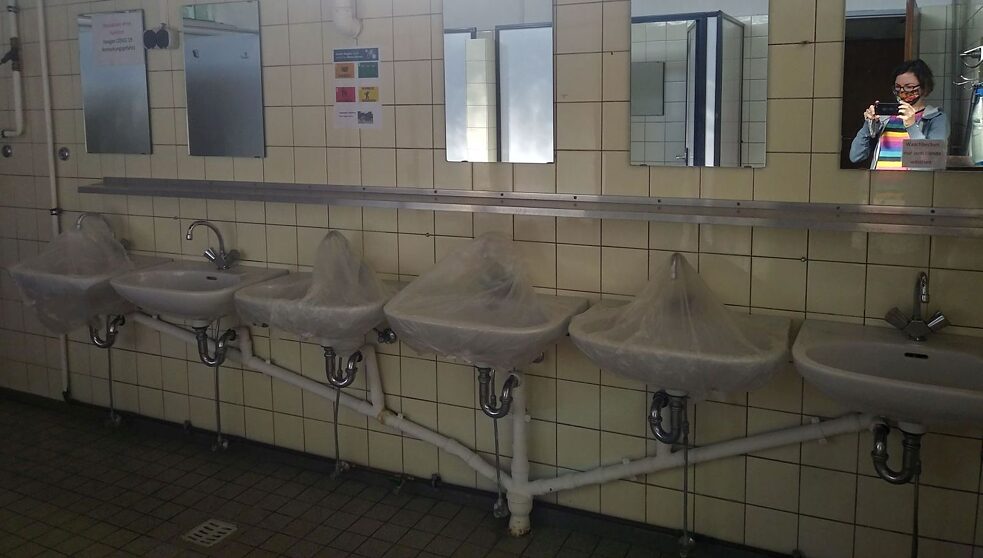 Campsite washbasins covered with plastic bags to enforce social distancing | © Brianna Summers Al fresco dining areas set up on footpaths and public squares were often cordoned off with tape to prevent overcrowding. Signage at the entrances of these flimsy security systems shouted “We will show you to your seat! Thank you for waiting!” Retailers proudly promoted their new contactless payment options: a revelation in a county where cash is still (mostly) king. At the campsites, strict limits dictated how many people could enter the bathroom facilities and most of the communal washbasins were covered with hazard tape or plastic bags to enforce social distancing. Masking up for all of three seconds while walking from the entrance to the shower cubicle did seem somewhat ridiculous, although I was grateful that the coronavirus risk was being taken seriously.

Soon enough it was time to don our FFP3 masks for the bus journey home. Seven hours later we were deposited at a temporary coronavirus testing centre behind Berlin’s central bus station. Was testing mandatory? In lieu of clear directions from the bus driver, passengers simply collected their luggage and scuttled off. And so we followed suit, happy to return to our non-communal abode where we could sleep a real bed and shower without thongs.