German Traces in New Brunswick
​​​The Treitz House in Moncton

The oldest house in New Brunswick, Treitz House, lies on the banks of the Petitcodiac River in downtown Moncton. It’s named after Jakob Treitz, who reputedly built the house for himself and his family in 1769. This was only a couple of years after his arrival in the territory of Acadia, which had been recently conquered by the British. The Treitz family was of German descent and belonged to the so-called ‘Permanent Settlers’, a group of eight German-speaking families who travelled to New Brunswick from Pennsylvania and contributed to the settlement of the Moncton region. 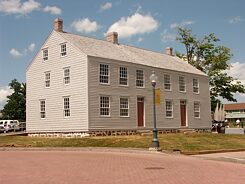 The Treitz house in summer | © Collection de Place Resurgo Place Collection The Treitz House is a part of the local history and a rare example of the early construction characteristic of New Brunswick. In addition, it is a tangible remnant of the German traces that can still be found in Moncton to this day.
Dendrochronology (tree-ring dating) has shown that the easternmost part of the house is the oldest section, built back in 1769. Other architectural details suggest that an extension was later added on to the original construction. The style of this addition reflects the architecture of the Georgian era and is thought to have been built in 1820. Despite these various chronological and aesthetic reference points, however, the specific architectural style and layout of the original structure remain unknown.

According to the Moncton Museum, the house is also an example of the mutual assistance and collaboration between the new German-speaking settlers and the Acadian families who had escaped deportation after the British conquest. This hypothesis is supported by the use of H-frame vaulting in the timber construction of the original building, which is rather unusual for Anglo-American architecture of the time. This suggests that Acadian craftspeople probably participated in the construction of the house. Even though the style and layout of the building are not clearly defined, the Treitz House also presents a unique opportunity for researching the architectural heritage of Moncton, particularly the building style and methods used in the late 18th and early 19th centuries.

The back of the Treitz House | © Collection de Place Resurgo Place Collection The house has been owned by several different Moncton residents over the course of its 250-year history. For example, when Ichabod Lewis was the owner back in the 1820s, it primarily served as a lodging house and hotel. It was later divided up into apartments and rented out for most of the 20th century until becoming the summer location of the City of Moncton’s municipal tourism information centre. Now visitors can attend small exhibitions and see a historical recreation of the house’s interior.

The Treitz Family in Literature 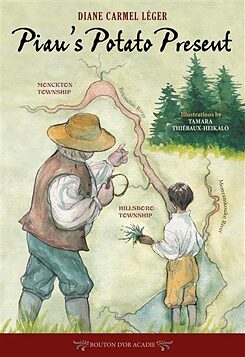 © Bouton d'or acadie The Treitz family can also be found in Canadian literature: Canadian author Diane Carmel Léger describes the story of a friendship between Acadians and the German immigrant Treitz family in her book La patate cadeau (Editions Bouton d'Or-Acadie). The book has been published in English under the title Piau's Potato Present : The true Story of the Poutine Rapee (also on Bouton d'Or-Acadie).

Contents:
Christian Treitz, the youngest son in a German family immigrated to the Monckton Township, learns that the trauma of the Acadian Deportation is still alive. The Treitz family is hungry and cold. Luckily, Christian meets Pierre Belliveau, who could have left Moncton’s newcomers to their unhappy fate. Instead, the Acadian has brought with him the seed of a new beginning. Despite the obstacles between them, their unexpected friendship blossoms on the banks of the Petitcodiac River.