Tanith
"We have to play this music now!"

He was one of the first electronic music DJs in Germany, and also one of the most successful: Thomas Andrezak (aka Tanith) began his career at Berlin’s legendary Ufo Club at the very beginning of the techno era. Shortly after, he became a resident at Tresor, playing a pivotal role in turning the niche genre into a nationwide movement that would prove to be a defining force in culture.

How did you first get into techno?

Tanith: For me, electronic music actually started in the early '80s. It was around then that I discovered Throbbing Gristle and Cabaret Voltaire. Electronic music always felt like sci-fi to me, like Isaac Asimov or something. Clinical, sterile stuff in outer space. It was the future. Throbbing Gristle were something different than, for example, Kraftwerk or Jean-Michel Jarre, who always had a slick aesthetic. I came from punk. I preferred a harder aesthetic and I found that in electronic music. That started back in ‘81, though it wasn't called techno yet. But for me, it was actually always the direction I wanted to go in.

I used to always buy these cyberpunk books from an American bookstore in Berlin. At that time the Wall was still up and the rawness of the cyberpunk world meshed very well with Berlin. And then a track like Stakker Humanoid or 808 State’s Newbuild album would come along. They were like really cool soundtracks for those books. You’d go down into the subway and you’d suddenly see the city in a totally different way. The fantasy that you’d have in your head became like a drug with this music. I was actually listening exclusively to this raw acid stuff then – but without vocals, just industrial. It was a perfect soundtrack to it all.

You moved to Berlin in ther mid-80s. Was the music scene in the city a reason for moving? 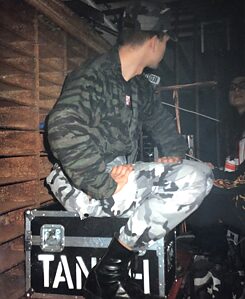 Tanith | © Tanith Yes. At the end of 1986, I actually moved from Wiesbaden to Berlin because of the music. For industrial music like Einstürzende Neubauten or Sprung aus den Wolken, Berlin was Mecca. I also knew Dimitri Hegemann from the bar Fischlabor, who later opened Tresor. Then things started with acid in 1988. So actually I moved to Berlin because of a completely different kind of music. The '80s were a decade of distinction. If more than three people liked something, you didn't like it anymore. Then with the '90s came this attitude of, "Oh, it doesn't matter. Let's just be cool. Just let it be!"


So how did you end up as a resident at Ufo?

We all knew each other in those days from Fischlabor. We were a motley crew of 150 people who were interested in this kind of music. The rest of Berlin didn't care. Dimitri Hegemann still had the Fischbüro in Kreuzberg. There was a coal cellar underneath the club that was set up as a sort of mini-disco. The ceilings were so low that you couldn't jump while dancing, otherwise you’d bump your head. The only stuff in there was a lava lamp, a '60s slide projector, and a PA that was more for guitars. The DJ booth was in a corner. That was the first Ufo: a really shabby, damp, nasty basement that you had to climb down a two-meter ladder through the basement hatch in Fischbüro to get to. I fell into the DJ job because I was an extreme record buyer. I would have rather eaten less and bought a record than given up music. People would always come up and say, "If you already have the records, why don't you just put them on?" Since we all knew each other, we just took turns. We had no professional aspirations at all, just idealism: "We have to play this music now!"

And then you’d wait for the UPS guy at Hard Wax. That's what Mark Ernestus told me.

That was the next meeting place. All the DJs would hang out there; DJ Rok, Jonzon, Kid Paul and I would wait around for the UPS guy to come. Then everything would be unpacked and whoever wanted the record put his finger in the air. We even had a little game: Sometimes only one or two copies would come, but all four of us wanted them. So we’d draw matches. Roc would have the matches in his hand and whoever drew the longest one got the record. I was always lucky (laughs). It was rare that I lost. Everyone else was annoyed because I was always the one to make off with them. But it was really pure luck. There were no tricks involved, but the others always knew: "Ah, if he’s going to draw again, I might as well not even bother!" (laughs)

What was important for you when DJing?

A DJ always has several things to consider. First, how to kick people's asses as hard as possible so that they dance. How do you get a euphoria going? And at the same time, they have to be challenging tracks, whether it's acoustically or arrangement-wise. Anything where you can guess what's going to happen beforehand is going to be boring. When techno was first taking shape – it was first called acid and then techno came out of that – there weren’t yet these formulas for what a techno track and a trance track should sound like. It was all still in the discovery stage. Although it was always defined as "harder," for me it wasn’t so much about the hardness, but about wanting to challenge. It could be something unusual, sometimes particularly hard or even something undanceable in between, which then leads back to dancing again.

There were no differences between East and West anymore


You've played so many times in your life. Is there a particularly special moment that’s stayed with you?

Because it was the first time, the first Tekknozid raves stood out. We were never more than 150 to 200 people in the club. On Wednesdays at the Cyberspace Club, there were 50 people at most. But then the Wall came down. East and West came together, and in early 1990 we had 500 people at the first Tekknozid in the Haus der jungen Talente. Everything meshed. There were no differences between East and West anymore. The crowd was huge by our standards, and the sound system was massive. It was all dark and the crowd went off like crazy, including people who used to smirk at me before: "You with your electronic crap." All of a sudden you’d see people standing on top of the speakers and going off. That was a moment where you could say: "Now we've really made something here. Let's keep doing it!"

Can you explain the concept behind Tekknozid a bit more?

Tekknozid was the first German rave. Wolle XDP, Johnnie Stieler, Zappa and I were thinking about making techno a bigger thing. There were a lot of places opening up in the East at that time. On Oranienburger Strasse, there was suddenly Obst und Gemüse. The Tacheles was squatted. You knew it was possible to get people excited about new things. So we did just that in the Haus der jungen Talente. The concept was: Everything dark. Stroboscope. There were four DJs that night. There was no need for more. It all worked out great. On top of that, ecstasy was also emerging at the time. That, of course, gave the whole thing a powerful boost, literally.

When you look back now: How has techno changed your life?

I never thought about becoming a professional DJ. I rather fell into it. But I'm very grateful for this freedom to think independently, to assemble my own little universe and present it to other people. I hope that I can also put those vibes back out there and inspire others. There is a better world than the “normal” one.  Just follow your flow and see where life takes you instead of following prefabricated paths.

Do you have any questions about this article? Write to us!