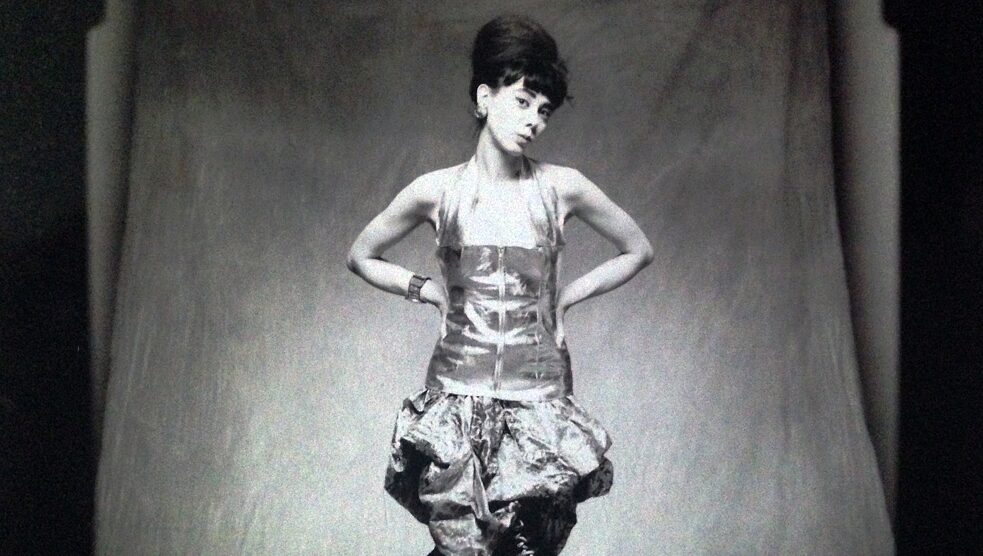 Danielle de Picciotto | Used with kind permission of the artist

American artist, musician and filmmaker Danielle de Picciotto was among the first to define the visual and stylistic facets of techno. In our interview, she speaks about the great moments and the far-reaching upheavals of the new era.

Can you still remember your first encounter with techno?

Danielle de Picciotto: Yes, but more with acid house, because that was the precursor. (Dr.) Motte and I lived together and he used to get all the records sent to him from every record company you can imagine. They came little by little beginning around 1988, one here, one there. It was a fluid development; It wasn't techno straight away, it was acid house first.

Was there perhaps a rave experience you remember as well? 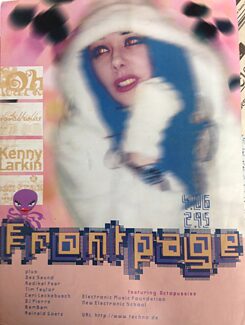 Danielle de Picciotto on the cover of "Frontpage" magazine | Used with kind permission of the artist I got my real kick when Motte and I decided to go to London, because there wasn't much going on in Berlin at the time. Neither of us had ever been to London before. Motte had never even flown. We really had no clue at all and just asked around. That's how we ended up in a club called Heaven and experienced our first techno party. That was the initial kick there, where we thought, “Wow, what's going on here?” The music was so radical, like we’d also experienced punk at the time, but the mood was so friendly. There was a pink fog. Everybody was dancing so strangely, and it was all kind of politically correct, like the hippies. But the sound was as radical as punk. And that totally gave us a rush. That was really the moment when we said, “We have to do this in Berlin, too!” Then we started doing our own parties in Berlin at the Turbine club.

reduced to the rhythm

What exactly was so radical about the music?

It was constructed music. We already knew about hip hop, of course, but there were still vocals and usually a melody. OK, you had Eric B. & Rakim, who sort of rapped without music. But that it was so reduced to the beat was super radical for that time. Back then, you’d always have something with vocals or with rap. And that there were no drums, just electronic beats, that was extremely radical. The music in the clubs in Berlin back then was rock. There was a huge rock scene, a tiny hip hop scene, and a huge 70s revival scene. And in all the gay clubs it was all 70s. That's all extremely melody- and vocal-based. Rock, pop, Neue Deutsche Welle, too. And this was music that was not live, but electronic, and totally reduced to the rhythm. That was incredible. 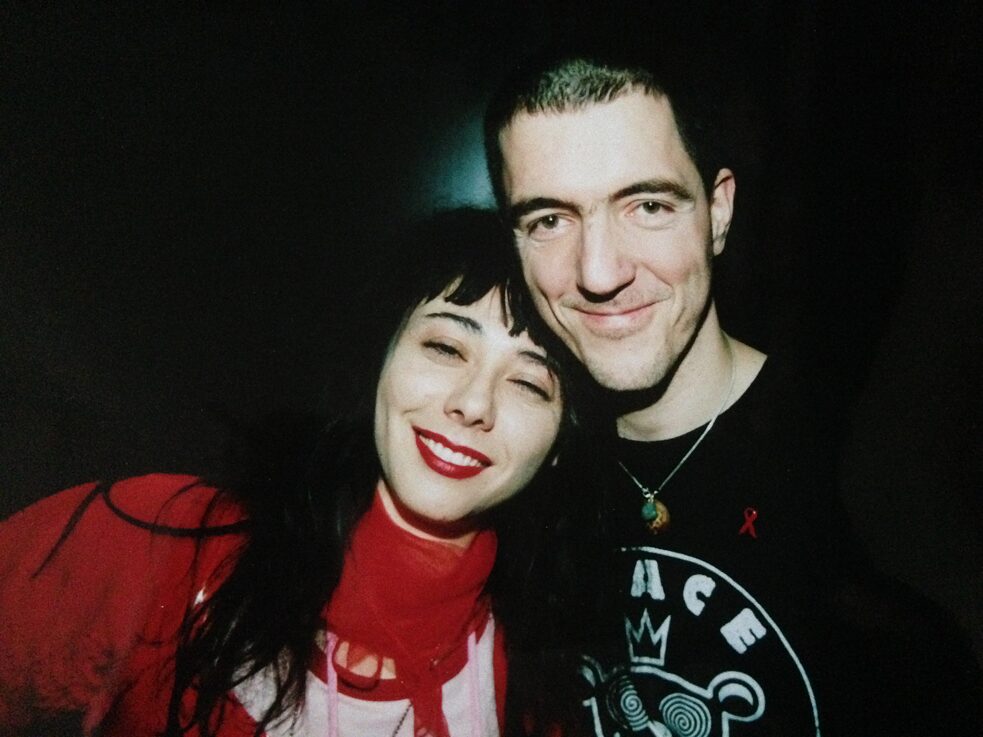 Danielle de Picciotto and Dr. Motte | Used with kind permission of the artist Did you immediately see that new paths in art were opening up through this?

From 1987 to 1995 everything changed. No one talks about how extremely different the fashion was in the 80s vs. the 90s, after the Wall came down. In the 80s everyone wore black and looked like a New Romantic. People had black shirts with little ruffles, dyed black hair and bright red lipstick. They wore white makeup. Then suddenly colour was in. It was like somebody had put on a colour film. Even at the first Love Parade, I tried to get people not to wear their black clothes or just t-shirts, but to be colourful. My whole fashion was also like that, sort of with flowers. You just had the feeling that an era was over and that it was enough already.

The atmosphere in Berlin was already extremely gloomy in the 80s. It was like a deserted island. You were surrounded by people who took an extreme amount of drugs at the end of the 80s. There were a lot of heroin addicts. There was still a post-war mood, which I, as an American who didn’t arrive until 1987, felt very intensely. I just thought, “This can’t be. Why is everybody talking about the war here? What war? The world war?” And when suddenly the wall was gone, everything was immediately different. It was so crazy. It's hard to describe it.

Did the clubs come to you to do their interiors?

That was the great thing in the beginning, from 1989 to 1995/96. The visuals were part of this new music. Before that, there were really no visuals. But at the first techno parties, it went without saying that the whole place would be lit up with them and that there might also be accompanying pictures hanging up. Sometimes it was also lasers. You’d basically changed the whole interior by illumination and generated a trompe-l'œil with the art, because it was so intangible. Many of these visuals consisted of film loops, slides and colours. It was supposed to be a manipulation of the psyche.

our music and our generation

What did the opening of the Wall change for you? Did new artists and trends come along with it?

I knew a lot of artists from the East. Because I was American, I could easily get in and out of the East, compared to the Berliners. I met an American woman very early on, in the first week I think, who was always going back and forth because she had met an artist/fashion group there. She introduced me and I became friends with them. That's why I was in the East quite often. So there wasn’t much of a division for me. Of course it was different, but it was part of the whole. East and West Berlin were essentially already one city. When the Wall fell, of course they came in. But completely different kinds of people also came over, for example the many investors who bought entire blocks.

When you see art today, do you sometimes think that there's still a bit of techno in there?

Most of all I think that when I see digital or new media art today. I remember the first Croma Park at E-Werk exactly. It was an attempt by various artists to show what kind of art was coming up. They rented computers and made projections for the whole E-Werk. I still remember how the computers were set up in a circle and no one really knew what to do with them. They were old Ataris. Then, of course, the first people started doing stuff with them. That's how techno art started for me. Basically, the whole digital art world is associated with it now. I always remember how we stood in front of them thinking, “What are we supposed to do with these things?” (laughs)

Is there a moment you remember particularly fondly?

Motte and I started throwing illegal parties after the Wall came down. We walked around and looked for places where we saw, “Look, there's the door open. You can get in there.” That's how we discovered E-Werk, funnily enough. We walked by there at one point and said, “Oh, look.” You could get in anywhere because a lot of the buildings were just abandoned. On the top floor, we said, “Come on, we're throwing a party here!” Those were always theme parties, for example, “Everybody has to come in white. Or everyone has to come with a hat.” At one party, everyone had to show up with a rose. We danced like crazy until sunrise and then went up on the roof. There was some New York “it girl” there. Somebody had invited her. She happened to be in Berlin and said the whole party was the most incredible thing she'd ever experienced because there were roses all over the floor. We were practically dancing on roses and then we were all lying around up top when the sun came up. There were 300 to 400 of us on the roof, completely unprotected of course, watching the sun come up and listening to music. There was a moment when we all had the feeling that we were conquering the world. That was really amazing. You don't notice it while you're at it. You don't reflect on it. But that was the moment when you realized:  something new is happening, something really special. And it’s us! It’s our music and it’s our generation! That was totally magical.

Danielle de Picciotto is an American artist who has lived in Berlin since 1987. The musician, author and filmmaker became known for her collaboration with the German DJ and musician Dr. Motte by initiating the first Loveparade in Berlin in 1989. She left her mark on the Berlin club art scene and was able to make a name for herself internationally. Her works are exhibited internationally.