Jürgen Laarmann
“The magazine that set the trends“

“Frontpage” Magazine was one of the driving forces behind techno’s meteoric rise. In our interview, the magazine’s late editor, Jürgen Laarmann, looks back at the early days of the movement.

Frontpage was a German magazine for electronic music and techno culture. It was first published in May 1989 with a circulation of 5000 copies and 8 pages as an in-house fanzine for Technoclub, an influential party with an exclusively electronic soundtrack held at  Dorian Gray, a club in Frankfurt Airport. Alex Azary, the founder of Technoclub and a veteran of the Frankfurt club scene, funded the early version of Frontpage as a local advertising medium, but its reach grew over time. When Azary’s funding ran out, Frontpage contributor and later publisher Jürgen Laarmann took the opportunity in 1992 to move the magazine and its focus to Berlin. From this it developed into one of the most important German techno magazines, with a circulation of 70,000 copies and 140 pages in 1996. The last issue of Frontpage appeared in April 1997.

Many people from the early days of techno have told me that it felt like a new era to them at the time. Did you have the same feeling?

Jürgen Laarmann: Yes, I would agree with that opinion: Into a new age. There was always this feeling of being a part of something completely new, and you were allowed to be excited about how it was developing. From the two thousand people at the Love Parade in 1990, you didn't yet know 100% that a million people would eventually come. But you could already guess it.

a magazine that was unique at the time

When did you decide to make a magazine that covered techno? 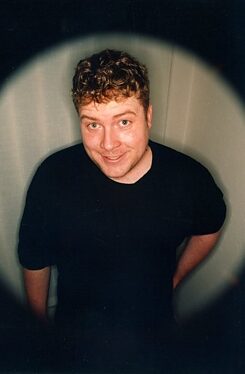 Jürgen Laarmann (1995) | © J. Laarmann In the beginning, my motivation to get involved with Frontpage came from the fact that as a freelancer for Spex – the indie newspaper at the time – I only ever got a very small section for techno. That was simply too little, because there were more and more interesting releases coming out. They had no clue what to do with them. Actually, they were just happy that someone edited it at all. But it shouldn’t have taken up more than a quarter of a page in the whole issue. So we thought, together with the people from Technoclub, that we would start our own magazine. But soon they couldn’t pay anymore and got into debt with me. To keep it running, we agreed in 92/93 that I would take over. I forgave their debts and the magazine belonged to me. At the same time, I had finished almost all of my pre-diploma exams in one semester while studying social and business communication at the University of the Arts. But that didn't seem as exciting to me as making my own magazine, which at the beginning could also earn me a bit of money.

How did you go about “making money”?

The whole Frontpage principle in the early nineties worked symbiotically. With Frontpage, we had a magazine that was unique at the time and still kept a special position until it stopped. We promote our own events with it. With the Frontpage tours, we had 150 tour dates throughout Germany and Europe. Dr. Motte then came to me in 1991 to ask if I wanted to work on the Love Parade, because I had promoted it with Frontpage. And after the Mayday festival came into being, we also supported it with Frontpage. That worked quite well for another 5 years.

What did an editorial meeting look like? Did they exist at all?

Yes, there were a few staff members. Everyone had their own section. We already controlled what kind of interviews we wanted to have. Sometimes record companies approached us and wanted us to announce new releases. Then there were the different sections. At the front there was always “scene news” and updates. Then there were a few artist portraits and some special features and record reviews as well.

You were actually THE event magazine for techno at the time...

Absolutely. Frontpage was seen as the techno bible for a long time. The great thing about it was that for a long time it was a freely distributed magazine that was only available through record stores. You could only get it if you were an insider, because it went out of stock very quickly if you didn't subscribe to it. Later we arrived at the kiosks and the whole thing was less mythic.

Did you also identify trends with Frontpage?

Without a doubt. After the first big wave, we were the first to launch super ultra hard gabba in early 1992 and then to promote trance as a big overarching trend. Frontpage was always the magazine that set the trends. I also thought at the time that it would stay as exciting as it was at the beginning of the 90s, that there would constantly be new trends. Unfortunately, that wasn’t really the case. It just became commercial.

To be with the pulse of the times, you have to mingle with the ravers, don’t you?

Frontpage always had the so-called “City Reports”. We were closely connected with the techno makers in the other scenes. We always had 8 pages of reporting on what was happening in Würzburg, Hamburg, Munich or New York. That was quite a good overview.

Where can you still see the influence of Frontpage in today’s magazine landscape?

Theoretically, Frontpage is a predecessor of magazines like Vice and others. The comic strips can also be found in the techno newspapers that came after. On the other hand, Frontpage was probably unique in terms of groups of people and involvement in the rave scene.

What has this magazine changed in your life and where do you still see these effects today?

From the beginning to the middle of the 90s, it was my purpose in life. If someone makes a movie about the ’90s in Germany and the movie is only 10 minutes long, there's still a minute of Love Parade in it. Frontpage significantly influenced that, so it rightly has a special place in history.

Have you archived your magazines at home?

No, I threw them all away, to be honest. If I ever wanted to reread something, I could go to the Archive of Youth Cultures 3 kilometers away. Maybe they’ll be digitized soon. Then you can also rummage around a bit in Canada.