In the era of digitization, the impending death of public libraries has often been announced. Faced with all these upheavals, they have managed to reinvent themselves, and the Grande Bibliothèque, located in Montreal, is a fine example of success and popularity.

Once known as the city of a hundred steeples, Montreal had more Catholic churches than libraries, reflecting a Quebec where religious fervour surpassed that of reading. It must be said that Quebec society has long maintained a neurotic relationship with knowledge, the province having already been led by a premier, Maurice Duplessis (1890-1959), always ready to boast of his having "never read a book". And imagine the reaction of American billionaire Andrew Carnegie when, at the turn of the 20th century, Montreal authorities refused his $500,000 donation for the construction of a public library worthy of this designation. Westmount, a small wealthy city with an English-speaking majority located in the heart of the Quebec metropolis, has owned its own since 1899....

The Quiet Revolution of the 1960s fostered a historical catch-up in terms of school enrolment and literacy, and libraries still play an essential role today. In 1961, barely 6% of the Francophone population had access to a library; by 2005, the rate had risen dramatically to 91.5% according to the Institut national de la recherche scientifique.

What was to become a Quebec variation of the famous Staatsbibliothek in Berlin sparked heated debate when it was announced by Lucien Bouchard's PQ government in 1997. Covering 33,000 square meters and developed at a cost of $1 million, it was regarded as an outdated extravagance. Some called it a cultural Olympic Stadium (the ultimate insult after the Montreal Olympic deficit in 1976!) others the death knell of the ill-functioning network of neighbourhood libraries. Many believed it to be the whim of the former director of the newspaper Le Devoir, Lise Bissonnette, who already defended the idea in her editorials in the mid-1990s before becoming its first CEO.

Judging by the figures, the follow-up proved them largely wrong. Located in the heart of the Quartier Latin between two educational institutions and above one of the busiest metro stations in the network, the Grande Bibliothèque was quickly inundated: 35 million visitors since its opening, 7500 per day in 2017-2018. With access to 2,3 million documents of all kinds (books, DVDs, CDs, video games, etc.) from the universal collection, and 1,3 million from the national collection. The two collections being grouped under the same roof was an innovative model at the time; several countries and cities are now drawing inspiration from it. 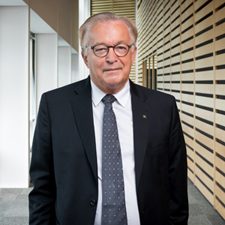 Jean-Louis Roy | © Michel Legendre From the fourth floor, Jean-Louis Roy, new CEO of BAnQ since 2018, his office overlooking the imposing and bright entrance hall of the Grande Bibliothèque, looks to the future. New technologies are far from having eliminated traditional media, "but we must increase our digital offerings, otherwise young people and researchers will go elsewhere," admits this former McGill University history professor who once directed the destinies of the newspaper Le Devoir and the Agence Intergouvernementale de la Francophonie (now the International Organization of La Francophonie).

The digitization of collections is progressing well (almost 30 million titles of all kinds, from books to cultural periodicals to maps), but the task is far from completed. "We have the same challenge as all other cultural institutions," says Jean-Louis Roy. “How to settle into the digital civilization? It is not only an extension of the physical library; it is another world with its own rules and standards.” 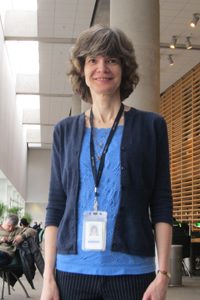 Manon Beauchemin | © André Lavoie To better understand it, the Grande Bibliothèque offers all kinds of spaces and services, starting with a popular Internet portal (6.9 million visits in 2017-2018), interactive environments for children, as well as introductory workshops on the many facets of this universe, including the essential online encyclopedia Wikipedia. This is one of Manon Beauchemin's tasks, in daily contact with users ("A very diversified clientele, from students to seniors and newcomers. "), and one of the two people responsible for the monthly activity Mardi, c’est Wiki! (Wiki Tuesday).

"We are receiving people interested in enriching this encyclopedia," says the librarian. By presenting the scope of our resources, users will be able to add reliable, credible sources and correct erroneous information. We even suggest pages to create. What we want is to promote Quebec, and French-speaking Canada, on the Internet. A long-term task. »

Moreover, the virtual does not hinder BAnQ's plans for geographical expansion- since 2016 the institution has become the guardian of the imposing Bibliothèque Saint-Sulpice, located on rue Saint-Denis, which for a long time was the main focus of the National Library, but has been abandoned for several years. Intended to become a state-of-the-art laboratory library, this $24 million project has not yet been completed, as $3 million has yet to be found from private partners. "When I'm not in my office, I solicit a lot of people for this project," says Jean-Louis Roy. Rehabilitation is a major technical challenge. "Everything is heritage in this magnificent building [in the Beaux Arts style designed by Eugène Payette and inaugurated in 1914], from furniture to stained glass windows and lamps.”

Sometimes a victim of its success 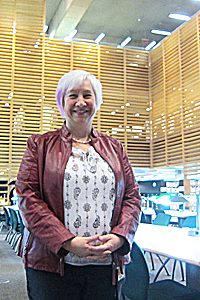 Michèle Lefebvre | © André Lavoie This extension of the flagship of Quebec libraries, covered with glass on the outside (the bursting of several panes made the headlines in 2008) and wood on the inside, belies certain growing pains. The virtual has not sealed the death of books and paper, and the national collection is constantly growing thanks to the legal deposit introduced in 1968, which allows two copies of each book published in Quebec to be collected. Unlike a public library, "we don't cut anything down," says Michèle Lefebvre, librarian at the National Collection. However, it is impossible to converse in "this quiet corner" of the institution, which is highly appreciated by users for its tranquility. "We have to send a lot of documents to our conservation centre, which leads to delays for users and researchers who want to consult them," she deplores, but adds, philosophically, "it is the reality of all libraries that they do not have enough space.”

Despite these problems, the success did not wane, gathering an admirably loyal and devoted base. This is the case of Jean-Philippe Gravel, a film critic and French teacher who has been frequenting the area since it opened. To establish his reading choices, he regularly consults the portal, but also does not hesitate to stroll between the shelves or in front of the thematic displays ("That's how I discovered the French writer Philippe Muray.").

He, who has seen this place transformed over time, appreciates the richness of its 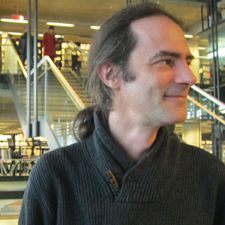 Jean-Philippe Gravel | © André Lavoie collections, including digital ones, as well as the ease of "finding what you are looking for". But the popularity of the places also causes its share of disadvantages. Jean-Philippe Gravel deplores "the attitude of some users who talk in workspaces, talk on the phone, eat, etc. ». But it may also be a sign that the thousands of regular visitors who converge on the Grande Bibliothèque every day do so with contagious enthusiasm, welcomed with open arms by staff who know how to face the music.

As for Jean-Philippe, with his hundred loans on an annual basis, and nearly 2000 since its opening, he does not have to be convinced of the relevance of this cathedral of knowledge in ensuring Quebec's intellectual fervor.

André Lavoie has been a film critic for Le Devoir since 1998, collaborator with various magazines (Coup de pouce, Sélection du Reader's Digest) and radio programs (Aujourd'hui l'histoire), as well as contract researcher at Ici Radio-Canada Télé (Vox Pop). After obtaining his master's degree in film studies at the Université de Montréal in 1992, he worked for several years leading workshops in introduction to cinematic art. Since 2001, he has devoted himself mainly to his work as a journalist, critic and lecturer, in addition to serving on the Board of Directors of the Association des journalistes indépendants du Québec.