Research
What is the environmental impact of helicopter surveillance?

The skies over Los Angeles are the densest net of helicopter surveillance in the world. The LAPD’s aerial division is a constant presence over the poorest parts of the city. The glaring searchlights and cutting noises keep residents up at night, communicating an air of supremacy and control. These birds have long been a focal point for social justice groups seeking to end police brutality/surveillance in Southern California, and are attracting renewed scrutiny in the era of efforts to defund the police. Emblems of bloated police departments, they stick out in city budgets as much as they do in LA’s nightly cityscape.

With all this in mind, a group of interdisciplinary artists are seeking to capture the material, environmental and human costs of this constant aerial surveillance. LA Birdwatchers — comprised of artist Suzanne Kite, technologist Ladan Mohamed Siad, designer Aljumaine Gayle, UCLA anthropologist Nick Shapiro, and mapper Michelle Servin — are using a combination of data collection methods to try and get an overview of the LAPD’s helicopter division. The goal of this art-science project is to capture the sonic stress of aerial surveillance, its areas of concentration, and its disproportionate contributions to climate change. Massive sat down with two members of the project to find out how exactly they plan to surveil the surveillors.

Leon Dische Becker: Let’s start at the beginning. What inspired you to investigate the environmental and human impact of police helicopters, and to turn it into an art-science research project?

Suzanne Kite: The protests were just beginning in Los Angeles [when we conceived of the project] and the helicopters were viciously loud. We were on a Zoom marathon as part of Goethe’s New Nature project and the helicopter noise kept interrupting the event. You could hear them in our microphones. As the situation in LA grew more and more serious, I found it difficult to stay inside. I brought cameras to the protests [for counter-surveillance purposes]. I knew that I had enough computational power at home to collect a bunch of data in a very quick turnaround. I was looking for a way to contribute to defunding the LAPD, and the more I looked at the helicopters, I realized that they were a huge waste of money. I also realized that they're flying below FAA regulation heights. That's why they're so loud.

One Flight from Massive Science on Vimeo.

A visualization of a single LAPD helicopter flight during police accountability marches in Los Angeles, 2020. © Suzanne Kite, Nick Shapiro, Ladan Siad, Aljumaine Gayle
Nick Shapiro: It became clear that studying those helicopters could be a useful way to understand the climate impacts of policing and surveillance itself. The helicopters seemed to be at the nexus of these two vital issues. A lot of work in my lab is about prisons and their environmental health hazards. It was important, for me, to go upstream to policing and surveillance, as some of the institutions that make mass incarceration possible in the US.

SK: Helicopters turn urban spaces into prisons. I experienced that during the [Standing Rock] pipeline protests, how the helicopters create borders and move people around from the sky. That also happens to be a way that the police move around protestors, or the homeless population, in Los Angeles. And these practices are completely intertwined with climate problems. We think of this as just one little art-science project in a sea of very serious long-term coalitions and efforts, but it does help me learn more about what's going on the ground and the different efforts to defund the police.

How will you be collecting and representing this data? What role is data collection going to play in your project?

SK: It’s the baseline. We have been trying to collect as much information as possible about the weeks when the protests were at their height. Even more helicopters were swarming over town. This was a time for LAPD to flex their budget — so they can ask for more next year. The artistic challenge is turning that data into a tangible thing. How do you make that as real to people as possible?

NS: We're working with a variety of different data sources. During the protest, Kite was listening to the helicopter radio chatter, pilots talking to each other. She was doing a kind of counter-surveillance and video collection. That kicked off our research. The LAPD has 19 helicopters, the Sheriff has four, Pasadena and El Monte have four in total and there is one interagency chopper.  We'll be able to calculate how much money these 20-hour a day patrols cost and, based on their fuel burn rate, their CO2 contributions. We've also been utilizing flight navigation data, which captures speed, elevation and geo-positioning, so we can see what neighborhoods are disproportionately targeted and sonically burdened by these aerial patrols. 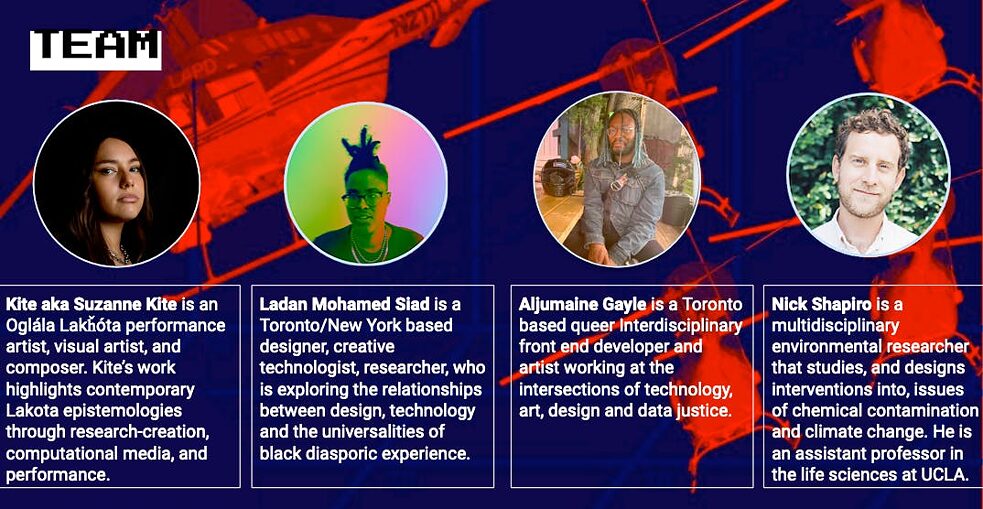 LA Birdwatchers Team | © Ladan Siad You’re not only trying to measure the environmental impact of policing, but also explore the limits of this kind of environmental critique. What do you mean by that?

NS: I think we would like to expand what counts as environmental impact. It's not just the climate footprint; it’s about how people experience their environment. The hypothesis we are testing is that a lot of the sonic impact these helicopters have on the people is heavily focused on neighborhoods of color, which are, at least, vexed and, at most, terrorized by these rotary blades slapping the air over them all night long. We intend to do spatial analysis to see which neighborhoods are most impacted day and night. We’re also curious how the flight patterns changed during the protests.

NS: We see that there are limitations to that kind of environmental critique. If we replace 19 helicopters with one predator drone, we're going to reduce the carbon footprint, but would that be a real improvement in people’s lives? Police helicopters certainly help us understand the knotted history of cars, climate, racism, and aerial surveillance. The history of the police helicopter in LA is heavily tied to racialized surveillance, first being used for full-time patrol work in 1965 during and after the Watts riots, but was first used by the police a decade earlier to monitor traffic. The internal combustion engine and auto-mobility made the militarization of policing and its impact on racialized bodies possible. Transitioning to mass transportation poses not just climate benefits but also benefits for reducing policing from the ground to the sky.

SK: A lot of environmental critique is presented separately from the immediate experiences of people. As I researched policing from an Indigenous perspective, their operation on contentious land — the environmental violence and physical violence perpetrated on Indigenous people, women in particular — I realized that these are 100% the same issue. Our project is a way of saying that you shouldn’t ignore the human — and, by the way, non-human — impact. This one little part of the police budget speaks to a much larger problem.

How do you intend to show the human impact of this constant surveillance on communities?

SK: We’re thinking of ways to capture the Sonic terror. Installation art and screenable art could be really powerful techniques to communicate that kind of thing. When I was listening to the helicopter police’s radios during the protests, I found that the pilots did not speak like they were public servants and the people below them were citizens. They are aggressive. And I think that's reflective of the culture of the Los Angeles Police Department. The ongoing investigation into LAPD, gangs inside the LAPD, is just one little sliver of the underlying cultural problem there. My fantasy goal is that this helps defund this program and eventually ends the entire program, ending this constant surveillance.

How did you personally become aware of these issues, and involved in this struggle?

SK: Besides my personal experiences, walking around LA doing teenager stuff, dealing with the LAPD. I was a research assistant for the Indigenous protocols and artificial intelligence working group and position paper. I'm always interested in linking my artistic practice with broader research questions. The question of artificial intelligence is huge. It’s one tiny slice of that is data collection and the use of data against people.

Looking Up from Massive Science on Vimeo.

A radar view tracking a single LAPD helicopter flight during police accountability marches in Los Angeles, 2020. © Suzanne Kite, Nick Shapiro, Ladan Siad, Aljumaine Gayle
NS: My lab [at UCLA] has been working on something that we've been calling the Carceral Ecologies project. We’re trying to test the hypothesis: can you have mass incarceration without mass environmental hazard for the people that are incarcerated prisons are built on? I've been thinking about what role science has to play in thinking about a different future for criminal justice. If your only point is that prisons are toxic spaces, you can just move prisoners to a non-toxic one where you, you know, clean up the septic tank. Or you just build another (perhaps bigger) prison. And so, a lot of times this environmental critique ends up making bad systems stronger, more resistant to critique. That's giving me pause. Maybe we need different kinds of critique. For me, this project is a way of trying to understand, should science even have a seat at the table for rolling back the surveillance state and our policing state?

I know you’re in the early stages of planning, but how do you envision the final artwork?

SK: I think the dream exhibition is a huge video installation, really extravagant, well-funded, well-attended huge crowd. Ideally, we would project the noise of helicopters with huge speakers on the West Side — projecting phantom helicopters onto Beverly Hills. I think it'll live beautifully as a website, though.