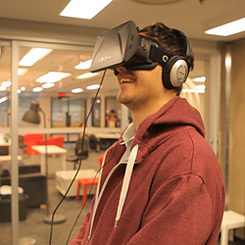 Ryerson University test subject watches the Polar Sea trailer for the first time in VR | © Deep Inc
The VR piece for POLAR SEA 360° has been made not only to show the Arctic, but also to convey a message. This raised the question of the appropriate film language. How can the viewer’s attention be steered? How should camera shots, cuts, scene changes be done? How can a focus be put on characters?

Experiencing the illusion of presence can quickly cause dizziness or nausea. POLAR SEA 360° avoids this problem by allowing users to either explore the virtual world from a fixed point of view or to use a fixed object for orientation such as a helicopter during panning shots. Instead of film cuts, POLAR SEA 360° works with smooth crossfades so that users can experience day and night as well as different seasons in the Arctic within the scope of a few minutes. The soundtrack draws attention to protagonists who appear as if in a dream and tell a story. Special software made it possible to embed documentary sequences in the 360-degree panoramas.