An in situ multimedia installation by the artist group RaumZeitPiraten

Inspired by the concept of expanded cinema, based on art history, the RaumZeitPiraten will create a conglomerate of optoacoustic devices and machines that they will install at the Goethe-Institut, transforming this place and its architectural properties into a walkable audiovisual network. What was historically a cinema experience will be become a futuristic and interactive experimentation place that, instead of presenting the illusion of a project for the future, will transform the passive observer into an active element in a space of possibilities. 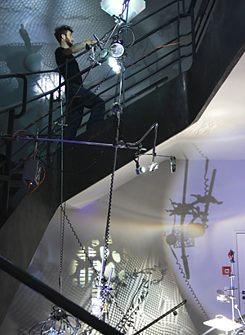 RaumZeitPiraten | © RaumZeitPiraten group. Since 207, they have been misusing and remixing ancient and up-to-date auditive and visual technologies for heterogeneous, organically improvised light and sound architectures. Their activities are aimed at playful, experimental connections of sound, image, object, space and time to an alternately-self-expanding-multimedia-performance-surround-spaceship-laboratory-travel to somewhere between science and fiction. The RaumZeitPiraten perform internationally and their work has been rewarded numerous prizes and grants.

High above the city of Metropolis, Joh Fredersen rules, while underground the workers work. Fredersen's son Freder falls in love with the worker’s leader Maria. At the same time Rotwang, an inventor, creates a steel robot, to which he gives the appearance of Maria on Fredersens instruction. The fake Maria wakes up the workers, who leave their machines and thus cause the flooding of the city. Can the city be saved by Freders and Maria's efforts?

As part of our Nuit Blanche, we are showing the most famous Ufa silent film and one of the most important cinematic masterpieces of all time.

Hardly any other work from the Weimar era of cinema has left so many traces in film history, but also pop culture in general, as Metropolis.

Fritz Lang's science fiction film about the rebellion of the working class against the predominant upper class of the future city Metropolis is also one of the most important restorations in film history. In 2001, METROPOLIS was the first film to be included in the UNESCO World Heritage List.

Are you curious and would like to immerse in the German language, take part in our mini German courses for beginners (duration: 30 minutes). Be surprised how quickly you'll be able to interact in German!