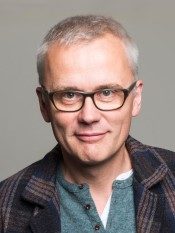 Berlinale Christoph Terhechte, director of the Berlinale Forum and on this year’s Hot Docs jury, introduces and contextualizes Philip Scheffner’s “slow cinema” film Havarie, currently installed at the Goethe Media Space. Terhechte hosted the film’s world premiere in Berlin in 2016, as well as many of Scheffner’s previous films.

Born in 1961 in Münster, Christoph Terhechte studied political science and journalism in Hamburg and has since worked as a film journalist in Germany and Paris for the “taz” newspaper amongst others. Until 1990, he also worked on the film selection and editorial work of the European Low Budget Film Forum in Hamburg. In 1991 he became film editor at the Berlin city magazine “tip”. He has been a member of the selection committee of the Forum since 1997. In 2001 he was appointed head of the Berlinale section. Last year he was honored with the Korean Cinema Award at Busan International Film Festival.