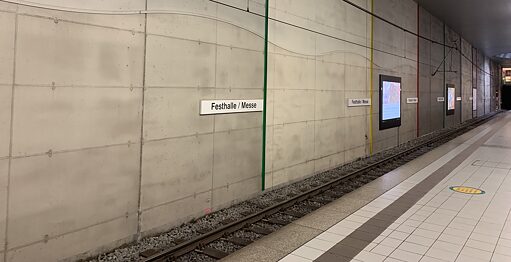 Commissioned & developed by the City of Toronto, the City of Frankfurt and the Goethe-Institut Toronto

In the fall of 2019, the Goethe-Institut Toronto and the cities of Toronto and Frankfurt brought Frankfurt street artist Justus Becker to Toronto to create a downtown mural in collaboration with Toronto street artists Alexander "Bacon" Lazich, Quentin Rockford, Christina Mazzulla and Kyla Buium.

In fall 2020 Bacon is travelling to Frankfurt to work with Becker on a public mural in the city's famous "Messe" subway station in honour of Canada as guest country at the Frankfurt Book Fair. The work will reflect the European Union slogan "United in Diversity" that also connects the sister cities Toronto and Frankfurt.

Alexander "Bacon" Lazich has earned a reputation for his signature graffiti style and vivid murals. He learned in the streets in the ’90s from those on the forefront of Toronto’s famed original graffiti scene, and is now a master who mentors others. Best known for his colourful works lining the alleys and streets of Toronto, Bacon describes the art form as being passed down from one generation to the next. His work has evolved to deconstructing traditional graffiti spray paint techniques to create an abstract graffiti style while maintaining letter form. His use of a mature colour pallet and mixing of realism with stylized graffiti fonts gives his work a unique look with smooth transitions and texture. In 2016, he was thrust into the public realm with ‘Machu Pichu,’ his contribution to StreetARToronto’s New Seven Wonders of the World mural project. He has painted a wall for Miami’s Museum of Graffiti, held solo shows at galleries, and been invited to international mural festivals.

Toronto's partnership with Frankfurt a.M. was formalized contemporaneous with the fall of the Berlin Wall in 1989 and is celebrating its 30th anniversary with this Mural Exchange and the Toronto visit of Frankfurt Mayor Peter Feldmann in fall 2019. Frankfurt is the historic German and European financial centre and home to the headquarters of the European Central Bank.

StART is a suite of innovative programs by the City of Toronto designed specifically for streets and public spaces. Initiated in 2012 as an integral part of the City of Toronto's Graffiti Management Plan, StART has been successful in placing vibrant, colourful, community-engaged street art in Toronto.