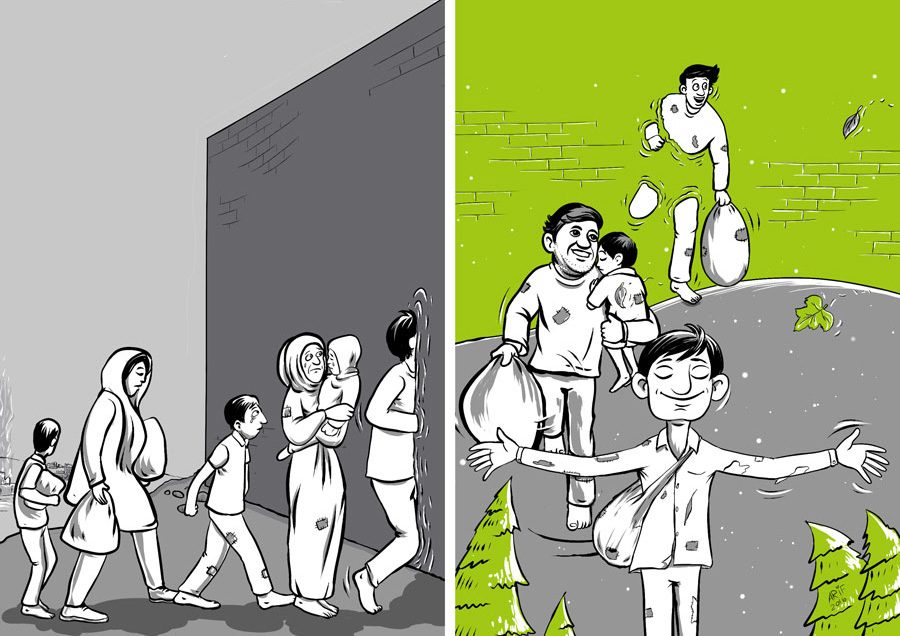 The one with the man entering the wall

My concept was ''Changing the picture/situation''.

In box one:
Some homeless refugees leaving their land because of war and entering into the invisible wall.

In box two:
Once they crossing the invisible wall, they discovering hope of a peaceful life. 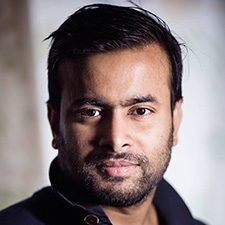 Portrait Arifur Rahman | Photo (detail): © Arifur Rahman Arifur Rahman is a cartoonist from Bangladesh who lives in Norway as a political refugee.
Already as a child, Rahman developed a passion for graphic art and quickly taught himself how to draw. In Bangladesh, where he is now known as Cartoonist Arif, he gained attention with his cartoons and critical caricatures.

Rahman was sentenced to prison in his home country for having named a cat after the prophet Muhammed in one of his cartoon series.

After six months in prison, Rahman felt he had to leave his native country to preserve his freedom of expression as a cartoonist. With the help of ICORN, he managed to escape to Norway in 2010. Since then, he has been living in Drøbak.
Giving the prophet's name to an animal is considered a taboo in Bangladesh and other Islamic countries.

He is the founder and editor of tOOns MaG, an online magazine started in 2009 in order to publish drawings, comic series, and cartoons. The aim is to create an international network of graphic artists and to promote open-mindedness and freedom of artistic expression. Arifur Rahman also founded Cartoonists Club – A global cartoonists community and has therefore already organized several international cartoon contests in Norway, India, and Slovakia.

For his cartoons he has received several national and international awards. Among others, he was awarded the first prize in the anti-corruption cartoon contest of Star Inside, The Daily Star in Bangladesh in 2007 and the Best of Online Activism Award of Deutsche Welle in 2015.

In addition to his work as a freelance comic artist and cartoonist for Norwegian newspapers, Rahman campaigns for human rights.