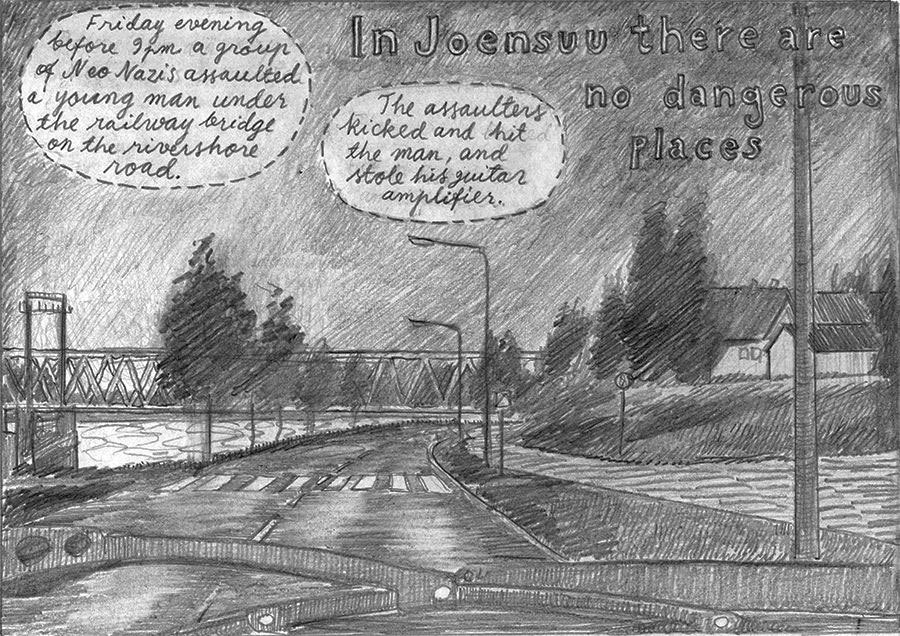 I had been thinking for a couple of years of producing a graphic novel about the neo-Nazis, who had vandalised my hometown Joensuu in Eastern Finland when I was a high school kid. When I was asked to produce a graphic novel for the Goethe-Institut, I immediately started to think of my own experiences with the neo-Nazis.

In the 1990s in Joensuu, the problem of violence was downplayed for some years, even though the neo-Nazis would assault passers-by week after week in public places, openly and systematically. There were many places I did not dare to go back then.
The media at that time wrote about the assaults in a way that made them seem somehow harmless. The violence on the streets and even the attacks on people’s houses were seemingly acceptable. Personally, I felt frightened each time I had to run to escape the neo-Nazis, or when I had heard that someone I knew had been beaten up by them. There were police present at the central market place during the weekends, but they did not necessarily do anything at all, even when the assaults took place right in front of their eyes.

Around the beginning of the 1990s, the first Somali refugees arrived in the Joensuu area. The refugees were threatened with Molotov cocktails and sometimes assaulted, too. The racist, and sometimes simply random and drunken violence against the refugees was probably seen as a “normal” reaction, as the neo-Nazis were not even given any real punishments for their crimes.

The situation changed when the neo-Nazis assaulted an American basketball player who was playing at the time in the local team in Joensuu. The American sportsman made it visible for the media, for the police, and for other cities in Finland, that racist violence actually did exist in Joensuu, and that he had decided to return to the U.S. because of this. Maybe because the sportsman was an American, his words were taken seriously, which then finally provided a key to solving the situation. Still, elsewhere in Finland many people tended to believe that this was simply a so-called “individual case”, and that there was no other violence besides this.

The news clip I translated and used as a script for this graphic novel is from the local newspaper Karjalainen from the 1990s, when the media had also started to mention the neo-Nazis, or the skinheads, in the news. The police commissioner who speaks here still seems to want to change the picture of this violence and to make it something that should simply be accepted.

I am quite sure that, when it comes to racist violence, it is dangerous to believe in “individual cases”. If a person truly believes that it is justified to assault others for such a motive, that person would probably not leave it at that, at only one “individual case”. That is why I was shocked, again when people started to write that it was only another “individual case” when the neo-Nazis beat up yet another young man in Helsinki this autumn, eventually causing his death. The neo-Nazis who had dealt him the deadly blows had been convicted of violent crimes before. 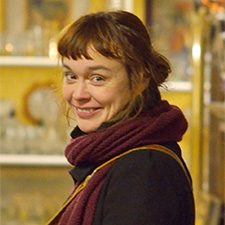 Her artworks have been shown in exhibitions in art galleries and museums in more than fifteen countries. She has published four graphic novel albums, of which the newest ones are Isä / Father (2013) and Kannas / The Isthmus (2016).

Moisseinen has also debuted as a film director with the animation Syntymäpäivä / Birthday (2014).