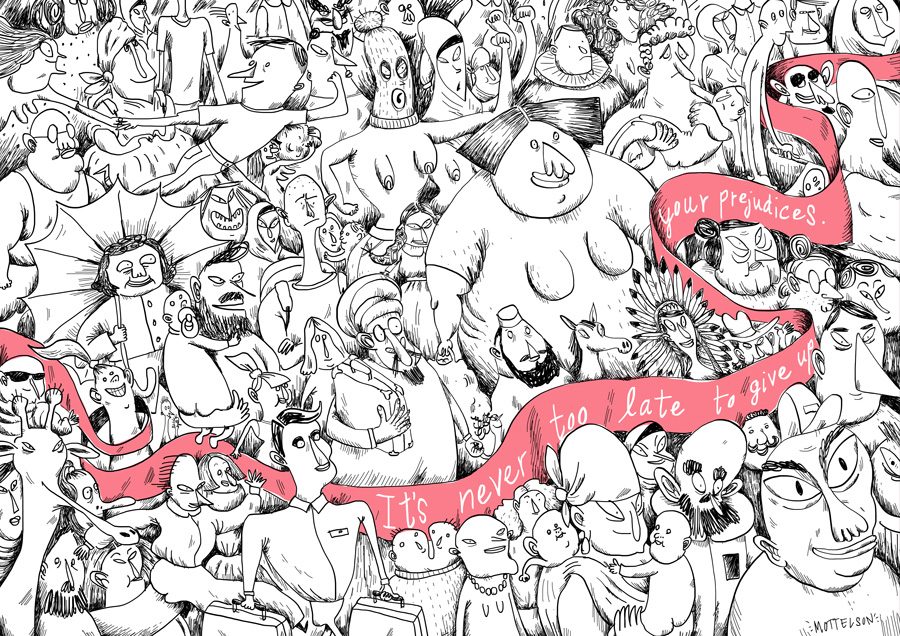 I started thinking about changing pictures and it occurred to me that the picture has already been changed.
The immigration debate takes up all the airwaves, while issues that impede upon most people´s lives are left ignored.
The immigration debate feels like a sideshow everyone looks at while public assets are moved onto corporate hands constantly, without anyone speaking up.

About the politics of fear.
It guarantees we are separated and can never organize and better our own situation. The only thing we are told to fear are the ones less fortunate than us.

One aspect of social media is that it lowers the bar to let it all hang out.
It feels like the collective Id is completely out in the open and the decorum that we used to keep in public forums has been left by the wayside.
To utter hateful opinions has become part of the discourse and it feels like the current narrative makes it harder to react against it. To protest against bigotry has been packaged as censorship and the newfound freedom to broadcast whatever trumps freedom from harassment.

Karstein Volle | Photo: © Karstein Volle Karstein Volle was born in 1974 and grew up in the Norwegian town of Tranby. He studied at the Kunst­aka­demiet in Oslo before moving to Finland in the 1990s where he works as an illustrator, web designer, and freelancer.
Although Karstein Volle started drawing more than forty years ago, he still has not been able to find a definite style. Since the 1980s he has, however, been drawing exclusively digitally. His cartoons and illustrations have always focused on politics and progress, on topics which interest him as an in­di­vi­dual and as a member of society.

His most famous work is the cartoon series Fakta fra verden which was printed in the Norwegian newspapers Dagsavisen and Dagbladet before being published as a book. As in his other series, I fremtiden, Karstein Volle's drawings about current issues are characterized by black humour and an excessively comic surrealism.

In 2012, he published Karstein Volles skjebner: et kunstnerisk selvmord (in English: Karstein Volle's strokes of fate: an artistic suicide), his most important individual work
until then, in which he approaches death in a satirical manner.

In early 2016, he published the graphic novel Muffens in cooperation with the Norwegian comedian, author, and comics writer Knut Nærum. Furthermore, Karstein Volle produces comics and cartoons for Finnish television and gives regular comic workshops in Norway and Finland.

Besides drawing and illustrating, Karstein Volle is also a musician and has already published several records with his Finnish band Nazca. In 2013, he co-founded the Finnish band Däd.