Traces of Germany in Lebanon
“Everything Is So Clean It Gleams and Sparkles.” German-run Hotels and Restaurants in Lebanon

Blaich, Gaßmann, Unger. For anyone with an interest in German traces in Beirut, there’s no getting past these prominent family names, which were known well beyond the confines of the ‘German colony’ in the first half of the 20th century. These three families ran the two best hotels in the city, which were the first stops for many European travellers, one of the reasons being their convenient location. The public rooms of both houses also served as meeting points for the ‘German colony’ before the outbreak of World War I.

Hotel Allemand – also known as Deutscher Hof (or ‘German Inn’) – used to be located near the old port and was run by the Blaich and Unger families. Café Blaich with its garden was attached to it. In the summer of 1899, the German author Karl May stayed at the Allemand and reported:

“8 July 1899. Beirut. End of quarantine. Hôtel Allemand Blaich (RT) So you can see how wonderfully and joyfully I live here, I am writing this letter to you on menus, the entire content of which I have heartily indulged in after the hunger I endured during quarantine. The ‘Deutscher Hof’, where I am staying, is my favourite of all the hotels so far. Trusty German innkeepers from the Black Forest. Good food, highest cleanliness. Everything is so clean it gleams and sparkles.” 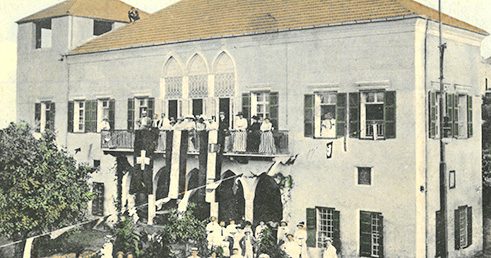 Hotel Deutscher Hof in Beirut | Probably as a consequence of the German defeat in World War I, the later owner Jakob Unger changed its name from Allemand to Metropole.  We don’t know when exactly his hotel closed down. Today Hotel Unger, as it was popularly known, only exists on historical postcards, as the entire quarter was hit hard by the civil war and was redeveloped during the reconstruction of the inner city. The approximate site of the old hotel is now occupied by a new building, whose ground floor actually hosts a Métropole Brasserie.

The other hotel run by Germans was Hotel Gaßmann. The journalist and travel writer Paul Lindenberg, who just like Karl May was residing in Beirut around 1900, wrote,

“The chamsin [hot, dry wind], with which we had already become well-acquainted in Cairo, was blowing, the mercury in the thermometer was climbing upwards at almost simian speed, and the snow shining down from the proud peaks of Mount Hebron [he probably meant to write "Mount Hermon", although he was more likely actually referring to the peaks of the Mount Lebanon range] seemed to be the true son in the scorching heat. Five Germans together, so don't you think they would be able to find a shady spot and a cool Bavarian beer with a German compatriot? Only joking! Like so many before us we were treated to a most hospitable welcome by father Gaßmann, in whose quaint, cosy inn the German Society holds its meetings.”

Hotel Gaßmann, too, is only preserved on historical postcards – it was located not far from the Allemand by the so-called Souk el-Jamil. The German Society is said to have met in the rooms of the Hotel Gaßmann for a time. A postcard retrieved from the clubhouse of the German Society shows another, most likely also defunct building.

Incidentally, Kaiser Wilhelm never stopped off at either of these hotels during his visit; he preferred to stay on his ship, the MS Hohenzollern, which was moored in the port.

There were at least two German-run inns outside of Beirut:

in its 1907 Palestine and Syria edition, Meyer’s Travel Guide listed a Hotel Allemand in Baalbek run by a Mrs. M. Zapf. The hotel was mentioned some years later in the memoirs of doctor Wilhelm His, who inspected hospitals in Syria during World War I. His was so impressed by the size of the bed bugs at Hotel Zapf that he took a sample for the collection at his clinic. One can safely assume, therefore, that this hotel wasn’t quite as focused on cleanliness. 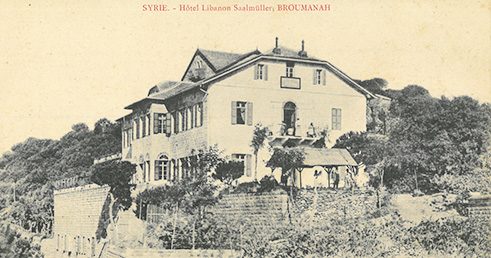 Hotel Libanon Saalmüller in Brummana was much more widely known. From 1892 to 1952 the hotel, which was renamed twice during that time due to changes in ownership, remained a family-owned business until Wéga Little, née Saalmüller, sold the hotel to Toufic Salamé in 1953. His descendants turned the former hotel building into a private residence.