The second online discussion in the ‘Goethe is(s)t scharf’ program was on the theme of ‘Urban Gardening: Does Gardening Really Work in Cities?’, and this involved an exchange of ideas on how city-dwellers engage with public and private gardens and other green spaces in the urban environment.

The event was jointly run by the libraries of Goethe-Institutes in Bangkok, Jakarta, Bandung, and Yangon, which together assembled an impressively broad collection of speakers that included Tim Schumann and Jens A. Geissler, two German head librarians who have been instrumental in broadening the role of libraries from being simply places to read or to borrow books to becoming environmental learning centers. Discussants were joined from Indonesia by the architect Sigit Kusumawijaya and by Winartania, who have been successful in connecting communities and developing these networks into environmental non-profit organizations. Meanwhile, Veerawan Katanyuvivad, a businesswoman active in construction who has battled her way through problems growing vegetables on roof-tops in the middle of Sathorn, participated from Bangkok, where she was joined by the moderator, Pattarasuda Anuman Rajadhon, one of Thailand’s leading stage performers and a confirmed nature-lover.

The high cost and limited availability of organic vegetables in Indonesia prompted Winartania to start her own organic kitchen garden, but her initial attempts were not a huge success. After struggling along alone, she connected with other growers to learn and to deepen her knowledge about how to grow vegetables while nourishing the soil, the importance of the earth and sunlight, how to look after seeds, and how different vegetables grow and develop. What was initially just a private interest then gave birth to ‘Indonesia Berkebun’, an urban farming network that links individuals and communities, helping them to develop abandoned plots into urban green spaces that provide Indonesians with organic vegetables.

Veerawan Katanyuvivad described the background to her roof-top farm. This has its origins in the vegetables grown by her aunt on the building’s 4th floor. When her aunt was still alive, she taught the building’s security guards how to grow vegetables and following this, Veerawan asked her father, an engineer with expertise in water systems, about extending her garden to the roof-top. This was all done with the intention of developing a kitchen garden for her family (just like Winartania), but as news spread in the local community, neighbors began to ask if they could buy some of these vegetables for themselves. 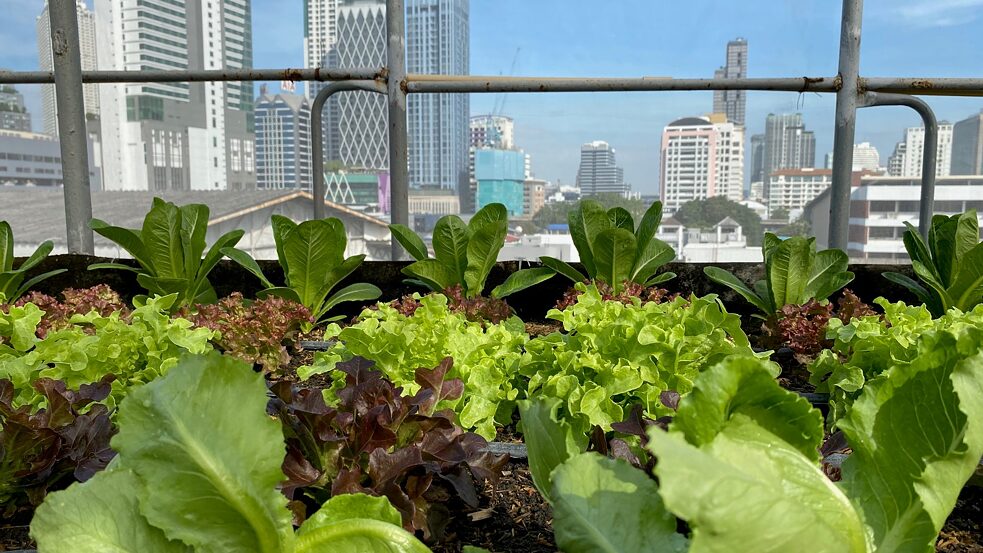 © Goethe-Institut Thailand In both these cases, the spur to growing vegetables began with the intention to feed a family, but this then developed into something more important for growers and consumers. These two examples illustrate how there is in fact a huge supply of space that could be put to use, but what is lacking is someone to simply plant vegetables and so turn buildings and empty plots into living, natural spaces that can help to support us. Winartania also added to this discussion by describing how during the Covid-19 pandemic, many Indonesians have turned to kitchen gardens to help improve their health.

Whether he is designing homes, commercial buildings, hotels, restaurants, or any other built space, Sigit Kusumawijaya always ensures that he adds as much green space to the completed project as possible. As Sigit made clear, in their work, architects themselves are able to play a major role in maintaining and promoting the health of the environment, and through their professional practice, they can act as channels through which healthy green spaces are passed from one generation to the next. Architects should thus develop an understanding of how design interacts with systemic issues, and this realization encouraged Sigit to apply his knowledge of architectural principles to the development of sustainable urban farming in Indonesia, specifically through the co-founding of Indonesia Berkebun. Through this organization, Sigit works with a network of activists to transform empty and abandoned areas into productive spaces, turning empty land across Indonesia into vegetable plots, gardens, and orchards. As Sigit said, humans are not separate from the environment and the rest of the natural world, and so developing green spaces is a way of building equality and making our interconnections with nature real.

Tim Schumann and Jens A. Geissler, two head librarians from Germany, have worked hard to extend the role of the modern library from being simply a place to borrow or read books, and to this end, both have addressed the twin questions of ‘Why do libraries lack green spaces, and what can be do about this?’. In answering this, they have undertaken a variety of activities to green libraries and to fill them with life, though for them, greening a space is not limited to simply planting trees or establishing a garden. Instead, green spaces should embody the complexity of the environment within which we live, and so among their activities, libraries have built insect hotels that can act as refuges and nurseries. These then help the public to better understand both the key role played by insects in supporting a healthy environment and how damaging insecticides can be, even to the point of triggering widespread insect extinctions. Libraries have also replanted rare wild flowers as part of ongoing conservation efforts, helped to disseminate knowledge about growing food so that people are better able to set up their own community farms, taken people to experience buffalos in the wild, and educated the public about problems with food production and food waste. Libraries are thus now able to work with a wide range of groups, including farming organizations, library users, the young, and the elderly, and librarians clearly have an important role to play in stimulating the public’s curiosity and interest in these issues. 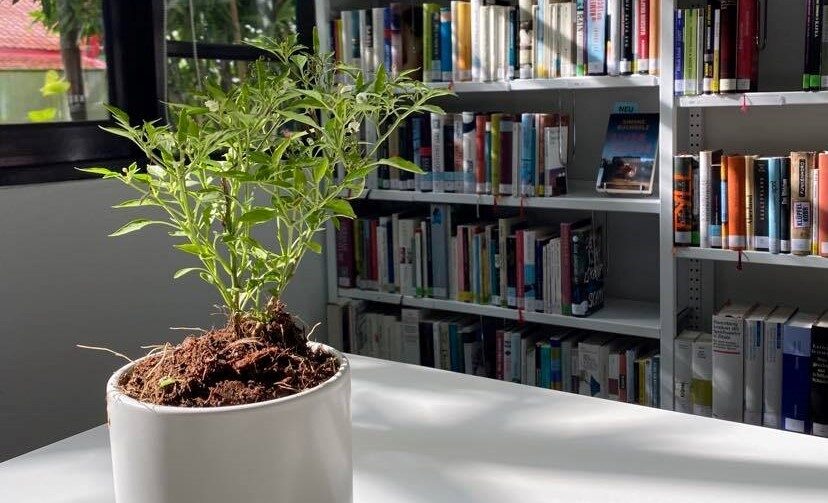 Tending to the garden of our heart

The discussants and the host offered a range of ways of understanding the words ‘garden’ and ‘gardening’. Gardens are a site where we learn about the environment, animals, and nature, but also where interactions occur, where we develop our creativity, and potentially where the community meets. Gardening helps us to encounter plants and vegetables that are in some ways almost soulmates to us, as each needs care and attention in its own particular way. Attending to these needs can teach us how to learn to wait, to patiently study what is here with us, and how to be brave enough to admit our mistakes and to start again. And more than that, plunging our hands in the soil and having dirt under our nails helps us to get over our belief that the universe revolves around us; time spent digging in the soil and watering our plants is time spent tending to the garden of our heart.