My Own Dummy Sitting On My Own Knee

My work sits between dispute and mediation, both materially and inter-personally. I seek to undermine constructs of authority—striving for stability in groundlessness. Working in collaboration furthers test ideas by resisting a singular perspective.

My Own Dummy Sitting On My Own Knee will be published on December 10.

My Own Dummy Sitting On My Own Knee

In an attempt to explore the difference between individual freedoms and communal freedom this work is a ‘collaboration’ with my grandfather who is deceased. But perhaps, in the end it is an exploration of artistic freedom versus the co-production of meaning OR maybe it is the difference between the rights of an individual versus the responsibilities one has to others OR perhaps it is about the myth of individual freedom and the necessity of communal freedom. Or maybe this is all just a lens from which I am looking at my grandfather’s writings.

Horst Julius Emil Berman, or as he was known in the U.S., Howard J. Burnham, was in his words "uprooted from his home and family" when he was twenty years old and "spent the next ten years—ten important, because formative, years in a young man's life—being shoved back and forth over half of the globe." In a typewritten page from around 1955, he continued: "Today, more than fifteen years later, I am finally beginning to get my bearings. I am still an optimist—even more so than ever. I still have great trouble believing in myself. Or, if you permit me to become sarcastic for a moment of reflection, I haven't been able to establish for myself a comforting prejudice by which to live with the directness and strong purposefulness of the majority of opinionated men—remember, a nice, fat prejudice is so much easier than individual objective judgement—but I have managed to somehow keep myself clear of entanglements, and still remain a part of society—how useful only the future will tell."  To some extent, that is perhaps the question at hand for me, his artist descendent. The 'freedom' he experienced after fleeing Nazi Germany permitted him to write, paint, procreate, and survive—an individual freedom was won and more. He met my grandmother and they had three daughters, one of whom is my mother.

My mother had a pile of his stuff in the basement for a while and I had been meaning to read it. I recently retrieved some and brought it home with me. After which, I was mailed even more. I was at first primarily astonished at how prolific a writer he was—I had grown up seeing all of his paintings (plus hearing about the ones that my grandmother apparently burned after his death). He wrote too? How did he have time to make all of this? He lived until his late 70’s and luckily kept it all. Of course, when I think of how quickly my house and harddrives are filling up, it does start to make sense that one could somewhat easily appear to be ‘prolific’ after death.
I only knew him when I was young, and the single memory I had was of sitting at his kitchen table and playing a game where I drew a scribble and he would transform it into an identifiable image. So, while reading through these stacks of written work, I find myself worried that I am unfairly forming an image of him based on his writings only, some of which were only scribbles in notebooks that he may not have wanted anyone reading. This image I am forming feels like it wavers from mythologized to flattened. But he often wrote self-reflections, so I will put one here to allow him to describe himself before I go any further:
“Perhaps one of the most difficult things is to evaluate oneself and come up with a fairly accurate result. But if I were to try this…all right, I’ll try it! At heart, I believe I am a rather “free spirit,” with a good artistic temperament. But the environmental restraints that were imposed on me, at an early age, and that brought the element of strict discipline and circumscription into my life, had a predominantly stifling effect on my natural artistic and emotional tendencies. It confined me always after.”

The amazing thing about reading someone’s writing, curated only by time and chance, is that you get to see their opinions change or how they seem to constantly contradict themselves. He wrote at one point that he was “not a man of unfettered optimism” but at other points wrote that he was in fact an optimist. So, did he mean the things he wrote? Did he mean them at the time he wrote them? If we write things and only mean them at that time, should they be resigned to platforms like chalkboards or Snapchat—so that they ideally disappear after being read? Well I can tell you this—he kept carbons.

In a binder of typed aphorisms, observations, thoughts and reflections, he wrote: “We need ideas more than facts, for facts are here today and gone tomorrow, but ideas may outlast generations, indeed grow stronger as time goes on.” As a writer/artist, I have been criticized for the certainty that my style espouses while writing on subjects such as relativity and groundlessness. I find that while what he writes about are mostly “ideas,” they often read as “facts.” Perhaps that is where I get it from. It is not the only thing I get from him, I have his hands, ridged thumbnails, and short arms, his smile (I think) and perhaps both my mother and I got our intense self-doubt from him as well. He writes,
“As a modern American, unlike my father of the gloriously confident twenties, I am not a man of unfettered optimism, but of nervous caution. Even in prosperity, I don’t believe it, and I am a rich man but I am a man of innate doubts. To be sure, I would like very much to believe in a world of true values and genuine hopes. And I pretend that this is so. But all the same, I haven’t got the old-time religion. I am jittery, especially as I buy my second car. I am moved to action by advertising slogans, for there is only the morrow—and no millennium in sight. Therefore I shall have to admit that I am a failure… a rich failure. I don’t know what I want in life… except that second car. I am not for dogma; for as pragmatist I couldn’t stand for that at all. And I am not drunk anough [sic] with history and historic purpose to need it.”

I am told that after arriving in the U.S. in 1939, he joined the army (and apparently he drew maps of Germany for the U.S. Military, but this is a family myth that I have yet to substantiate). Around 1943, he was sent to Georgetown University to study to become a “spy” (well, to be accurate, the way my mother tells it “he was sent to spy school”), until he was told he could not become a spy after all because of some inadequacy like his eyesight or flat feet or something. He met my grandmother while in the military and they must have married somewhat quickly, as they had their first daughter, Lydia in 1946.

I don’t know when exactly he went into the advertising business, but from the 1950’s until he retired, he was an artist for the “adbusiness.” And if his writing has truth in it, the profession was an immoral one, which I can’t argue with. But it is heartbreaking to read his infuriated tirades about the industry in writings that span the course of over 20 years. He wrote, “What gives all of us people in the adbusiness such a guilt complex (which most of us won’t admit) is that it’s really a rather immoral kind of profession, even more than many others, even more than insurance (and that’s saying something). An adman is a professional liar.” He also wrote, “The salesman is the gravedigger of our commercial civilization. He is the prophet of the big and little lie, the promoter of hypocrisy, a man without loyalty and without friends. All he has are customers.” Also this: “A wholly ephemeral institution…Ad agencies are in charge of promoting and merchandising our throw-away civilisation” … “professional hacks, make it their job to inflate language, deflate truth and sell cheap and expensive junk.”

He seems to flagellate himself, saying he is a failure but it may be that his “nervous caution” and uprooted past traumatised him into feeling bound to a career that made him “rich” (don’t get me wrong, his wife, my grandmother, still worked as a hairdresser), but he was certainly providing for the family he created. So perhaps it was me, an extension of his family that made it impossible for him to quit while his own ideals made him incapable of committing to the field he devoted 20+ years to. Or maybe it is the “free spirit” he said he was at heart, or perhaps it was that he was an immigrant. He wrote: “I am a man apart from the mob, an alien among the indigenous, a lone traveler on the sidelines of life who sees the people march in step on the broad highway—but unable, or perhaps even unwilling, to join in.”

But what's more—he managed to remain free from the judgment and criticism that successful publishing may have brought, and furthermore free from the discerning and argumentative eyes of his granddaughter, because he died before she could read his work. He wrote that “recognition for one’s a man’s knowledge should not be sought in mere tangible returns, nor in its rare, and momentary, flashes of awe-inspiring genius, but in its living continuity beyond the grave.” So I suppose, that is my responsibility. I do not have the luxury of not reading this, at least someone needs to give it life beyond his grave.

But there may be some type of artistic freedom in dying without having an audience for your work. He did, afterall, write: “His ship foundered, a delicate craft named, tentatively, Intelligence, in a sea that bubbled, like a seething and stinking cesspool, heated to a slow simmer, and kept heated, incessantly from the subterranean fires of suspicion, hate and fear—the sea of public opinion.”

And yet, it seems he may have lost all freedom because all that remains of him are these inanimate, discolored and brittle pages sitting in his granddaughter's lap. He once wrote "Sometimes I wish I could be my own dummy sitting on my own knee." Hopefully he meant that. 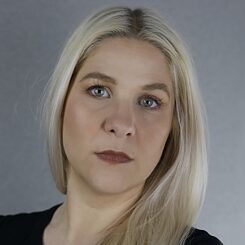 © Máire Witt O'Neill Máire Witt O’Neill is an interdisciplinary artist based in Chicago, IL crisscrossing disciplines such as  performance, video, sculpture, installation, writing, directing, education. O’Neill is also one half of the collaborative duo Mia+Máire, whose largest project to date is the performance of a corporation, SoftPantsStudios, which creates SGCtv (Sad GIrls Club TV) and Mad Girls aka MAGGOTS Club TV. O’Neill received her BFA from Maryland Institute College of Art and her MFA from The School of the Art Institute of Chicago. She is currently a lecturer at SAIC and the Director of the Theater program at Music House Chicago. O’Neill’s work revels within a collision course of entertainment, voice, philosophy, television, and goofy games of conceptual twister.

Next: Michael Winfield: Transcend
Back to the overview