Cassandra’s Eyes
The vales of resistance in the feminine

If all resistance, enunciated in signifiers — isms/counter-isms —is a poetics of un/becoming, what then is a feminist poetics of resistance?

The mind looks for security, he warns. Let’s defer the author for a second (imagine a wolf in the woods). Language, similarly, can be a panacea: policing its own cutting edges, eschewing the discomfort of deferred meaning (the better to take you home, Red Riding Hood). Words do not exist outside of ambivalence or history, as the last sixty years of critical theory has reckoned. A word that is fetishized, reified, however, in a particular culture, at a given moment, serves as a container for what escapes the ‘word-hole’[i] sealing it up, channelling dense energy. There in the cutting edge of that sieve, some of the traces of our former ‘truths’ (signifiers signifying) now become homonyms that have half-disappeared. Vale/veil: Today’s vale of cybernetics/ fetish of digital stripping/penetration carries a trace of its homonym but as binary: unveil. The Zeitgeist of self-revelation coinciding with the techné of the gaze (Virilio's Vision-Machine). Even torture has to be filmed.

I first encountered the D/G[ii] rhizome, as ghost. The immanence of the ghost in the machine: dance. It was the year of the Iraq war: I would see newspaper posters of the National Library in Baghdad burning on the side of Parisian bus stops, walking around the fourteenth arrondissement. But it was along Rue du Temple, in the fourth, that the sunshine of a North African “baladi” ushered in that ghost, eluding Orientalism’s cabaret fetish in a studio, but not only: eschewing the fetishization of liberal-secular-feminism, as well, and even the contortions of self-colonization (the nativist paradigm that re-territorializes the postcolonial subject into a national object). The latter belongs to the Third (world) wave of feminism (world) wave, whose inherent contradiction is that it displaces oppression to an always foreign other[iii].

But I am getting ahead of myself: modernist feminism—its liberal ethos inscribed into ‘second wave feminism,’ remains the de facto feminism of Bangladesh,[iv] alongside its sometime hybrid that fuses the liberal politics[v] of this second wave with the postcolonial discourse of the third. There are peripheral radical feminisms, with their intersectional utopian visions,[vi] but I am focusing on the majoritarian trend. Invoking ‘Bangla indigeneity’ (a word with many holes in the context of ethnonationalism) as a form of womanism or alternative to liberal modernism is also problematic; Islamic feminism/womanism exists as discourse but remains uneasily invoked in the dominant secular paradigm at home (trans-nationalism is easier). There is ‘respectable/bhadro’ Muslim feminism, i.e. Begum Rokeya, who was a forerunner, not just in Bengal but British India, of women’s education. Interestingly, though, her sci-fi novella, Sultana’s dream, has been described by radical feminists (critical) of present BJP-ruled India, as “narrowly focusing on gender binaries”: her utopia did not encompass “the caste and class dimensions of oppression” (Deepsha Sharma[vii]); it is thus not surprising that she can be invoked in the language of secular exceptionalism, in modernist Bangladesh, in spite of her invocation of both religion, as a force of good in her gender-reversed utopia, and science, in what Sharma has called ‘a kind of happy marriage of love and truth.’ Ironically, the concept of purdah—for which she is renowned as the Muslim that critiqued ‘the veil/seclusion’, itself was never exclusively a “Muslim” institution in British India; the ghoonghat of non-Muslim women was prevalent in certain regions of India and remains a custum in what has been called the Hindi Belt[viii]. This is perhaps why the Dhaka Tribune, in 2019,[ix] commemorated Rokeya Day in a careful sequence of words, referring to her education of women, “in particular Muslim women,” only after first identifying her as “Bengali feminist, activist, educator, etc.[x] In India, she remains “Islamist Feminist.” The “Begum Rokeya” in the present (my speculative) imaginary of Bangladesh (after all she preceded its formation—so she is a ghost[xi]) suffers amnesia, having forgotten the [xii]Arabic/Persian/Urdu’ segregated/filtered from Hindi, Gujrati, Bangla, and even—Sanskrit (!), among others[xiii], and who can thus be instrumentalized in the cause of a purified indigeneity, a ‘shanatan[xiv] tongue’, as someone who being Arabic-educated wrote in the ‘common people’s language’ Bangla[xv]. In other words, her utopia is effectively now a “Bengali feminist utopia.” Traces remain, of Muslim/Arabic/Urdu, and make complete re-territorialization into some ‘deep authentic self’ impossible without some form of (counter) cleansing/dystopia. The best thing about Bangla: there is no gendered pronoun. (Yet the nouns themselves are gendered). No comfort there.

If all resistance, enunciated in signifiers—isms/counter-isms—is a poetics of un/becoming, what then is a feminist poetics of resistance? Let us return to the ghost. I noticed that the Moroccan teacher would wear jeans and sunglasses each day to work and home, as though the casual everywoman’s anonymity was her costume, and the shimmering of her veil-becoming in which she danced through the signifiers of self/other like skins shed, her actual outfit. The so-called dance of the seven veils[xvi] is not striptease, and there are versions of the dance whose proponents dance fully clothed[xvii]. The veil, in Arabic, Persian and Urdu mystical poetry, works as a D/G rhizome, a connection of multiplicities. It becomes assemblage: veil-Beloved, veil-God (God is the veil between you and your beloved; He is the Beloved), veil-love-dog and veil-vision, veil-desire[xviii]. Not the cage, but the open door, the connection to the invisible neighbor’s machines (world-next door-not beyond) that is immanent, and if we are to now come down to the third vale, valley, of this word-hole, we can think of door through which the “Sahajia/Baul[xix]” (unknown) bird of life passes. It is the open secret (‘invisible essence’) of our existence: both death and eternity, veiled in our desiring of both. I never asked her what her ‘chetona’ was, the quality of being ‘woke’ with its very Bengali-parameters, usually translated as consciousness—or, as I like to connote it, ideology.

I feel more ethical proximity to Mohammad Ali, the boxer, than Atwood the feminist writer. But in speaking for other women, which is no small crime, I must invoke the ‘white woman’ who deplores that act. It was the Canadian Atwood, crowned controversial in UBC’s sexual harassment case against its Creative Writing Chair, more recently creator of #AfterMeToo, who is liberally quoted regarding what may seem like a fetish for agency—via ludic reshaping of words: A word after a word after a word is power. Poet-scholar Rachel Blau DuPlessis in Breaking the sentence, breaking the sequence[xx] describes a similar power, but in its deconstructive sequence, an experimental feminist poetics, creating discomfort with given grammars of being/saying. Because: we are always guilty before tried, in the other direction.

But, Atwood, is it power we want? D/G don’t think so. Left right fascist. We seem to desire ‘dis empowerment.’ “Liberalism” as a becoming-fascism, a zone of comfort which is policed—secured—by territorializing its others, can become its other in the simple continuum of left/right. The precedents in history are scary. Not, as Gramsci would note, the Marxist left, but the nationalist-socialist ‘left.’ Fetishized-feminism, seeking security in the cells of the great body that is perhaps the most precise description of fascism, can become such an assemblage.

If power is what we desire, then why is the figure of the Bedini, snake-wielder extraordinaire, as a powerful feminine presence almost exempt from the literature on womanism/others? Bedinis walk very straight - backed through the streets and across the rivers of Bangladesh, working invariably off of their charm but not their bodies, with husbands in recumbent expectation. Many/most are Muslim and nomadic and see no contradiction in bearing the snake as the talisman of their power/freedom. She is just that thing that refuses to be signified in ready-made words, urbane, nomadic, water-sprite, artisan, sexy not to be confused with the sex worker who has to sell her/himself in the market—elusive. (The serpents are always inside boxes.) Rhizomatic, she is snake-veil, a danger near you. Radical proximity.
Sources 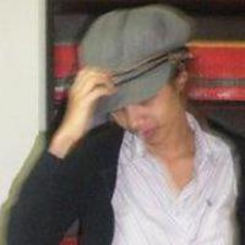 © Seema Amin Seema Amin writes and occasionally performs; she is the author of two poetry books (UPL) and was Senior Feature Writer of the art magazine Depart. Her first home was Bangkok, Thailand but she lived across Europe, Asia and the US before re-inhabiting Bangladesh, where she teaches literature. Presently, she edits Cassandra’s Eyes and is in the process of publishing her third manuscript. Several of her poems from the latter are being published this year, in The Aleph Review and in an upcoming anthology, Quicksand Borders. 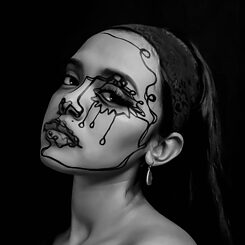 © Fabliha Nawar Fabliha Nawar is currently doing her undergraduate in English Literature at Brac University. She is an experimental artist, exploring the Face/Body art genre. She shifts canvases from time to time, but her interest is mostly about colour composition.